God of War just dropped on PC. And while the game is graphically stunning some two years after its original PlayStation 4 launch, some PCs might need a bit of help squeezing out extra performance.

Nvidia’s Deep Learning Super Sampling (DLSS) and AMD’s FidelityFX Super Resolution (FSR) can help out by rendering games at a lower resolution before upscaling them to a higher one while maintaining and improving frame rate.

Differences between DLSS and FSR

There are a few key differences between each upscaling technology, with the main one being that Nvidia’s DLSS is the only one that has the advantage of being AI-based. Nvidia’s DLSS is only possible thanks to the tensor cores in 20 and 30 series GPUs, which brings us to the next major difference: compatibility.

While DLSS is limited to Nvidia GPUs 20 series and up, AMD’s FSR and Nvidia’s NIS are more open solutions. AMD’s FSR is open to a wide variety of cards, including 10 series Nvidia GPUs. FSR doesn’t use AI and is instead based on a complex set of algorithms.

There are several settings for DLSS and FSR. Below is a comparison for each one along with screengrabs. 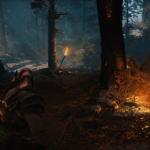 For those interested in pushing high frame rates over graphical fidelity, AMD and Nvidia provided their Performance modes in their respective upscaling tech. Despite being geared toward accomplishing the same goal, Nvidia has a leg up off the blocks. The sharpness of the image quality is maintained while the frame rate hovered around 82 to 96 frames per second. Conversely, AMD’s FSR Performance mode ran around 84 to 99 fps but looked noticeably worse to the point of squinting due to the blurriness. DLSS Performance takes the cake.

If you’re looking to skirt the lines between performance and quality, these are the settings for you. But again, despite serving the same cause, DLSS comes out ahead by keeping the image clean and the frames at a decent 83 to 93 fps. AMD’s FSR runs God of War at around 83 to 96 fps but still looks blurry with noticeably jagged edges and doesn’t quite come off as being balanced. But if you desperately need the frames, then skip AMD FSR Performance and hit FSR Balanced.

Both AMD and Nvidia’s aim with Quality mode provide, you guessed it, better quality. FSR outpaced DLSS, running at 79 to 94 fps while DLSS ran slightly behind at 79 to 89 fps. AMD’s upscaling tech also produced a noticeably better-looking image than both Balanced and Performance—though that isn’t saying too much. If you really don’t care about image quality, FSR might be the better call here. But the setting is called “Quality,” so DLSS still wins out here.

Nvidia and AMD’s settings part ways, with Nvidia steering toward Ultra Performance and AMD opting for an Ultra Quality mode. This makes sense for FSR since it’s lacking overall in the image quality department. Luckily for AMD, Ultra Quality mode finally rights the ship regarding image quality and doesn’t take a bath on frame rate either. Hitting between 77 to 91 fps and looking closer to the native render resolution without any blurriness or graininess, Ultra Quality is a better bet than most of the other alternatives if you care about graphics.

Nvidia’s Ultra Performance was its worst-looking mode, which isn’t saying much at all. The most noticeable graphical difference was the fire. Heatwaves are more pronounced in their shapes, meaning you can see how intentionally shaped they are. Shadow on the ash and coals of the fires are also noticeably grainy and pixelated. Still, for 86 to 99 fps, the trade isn’t that jarring when you consider how AMD’s FSR normally comes out looking.

Should you use DLSS or FSR to run God of War?

Looking at each upscaling software, there’s a clear frontrunner. Nvidia’s DLSS fulfilled its function by maintaining a decent frame rate that outpaced native resolution without sacrificing image quality across the board. While using each software led to an overall smooth experience, the graphical differences were jarringly noticeable. For those who doubt AI-based applications and software, this is a fairly good example of how AI can provide an edge.

AMD’s FSR struggled to keep the pace and looked rough around the edges—sometimes making the game look far worse. While the frame rate stayed competitive with DLSS, there’s no ignoring how dramatically blurry and muddled the image quality became with the settings on. While the Ultra Quality setting turned things around a bit, the other settings don’t provide much in the way of a fair trade if you value image quality. From the outside, there seems to be more AMD could do here to make FSR more competitive.