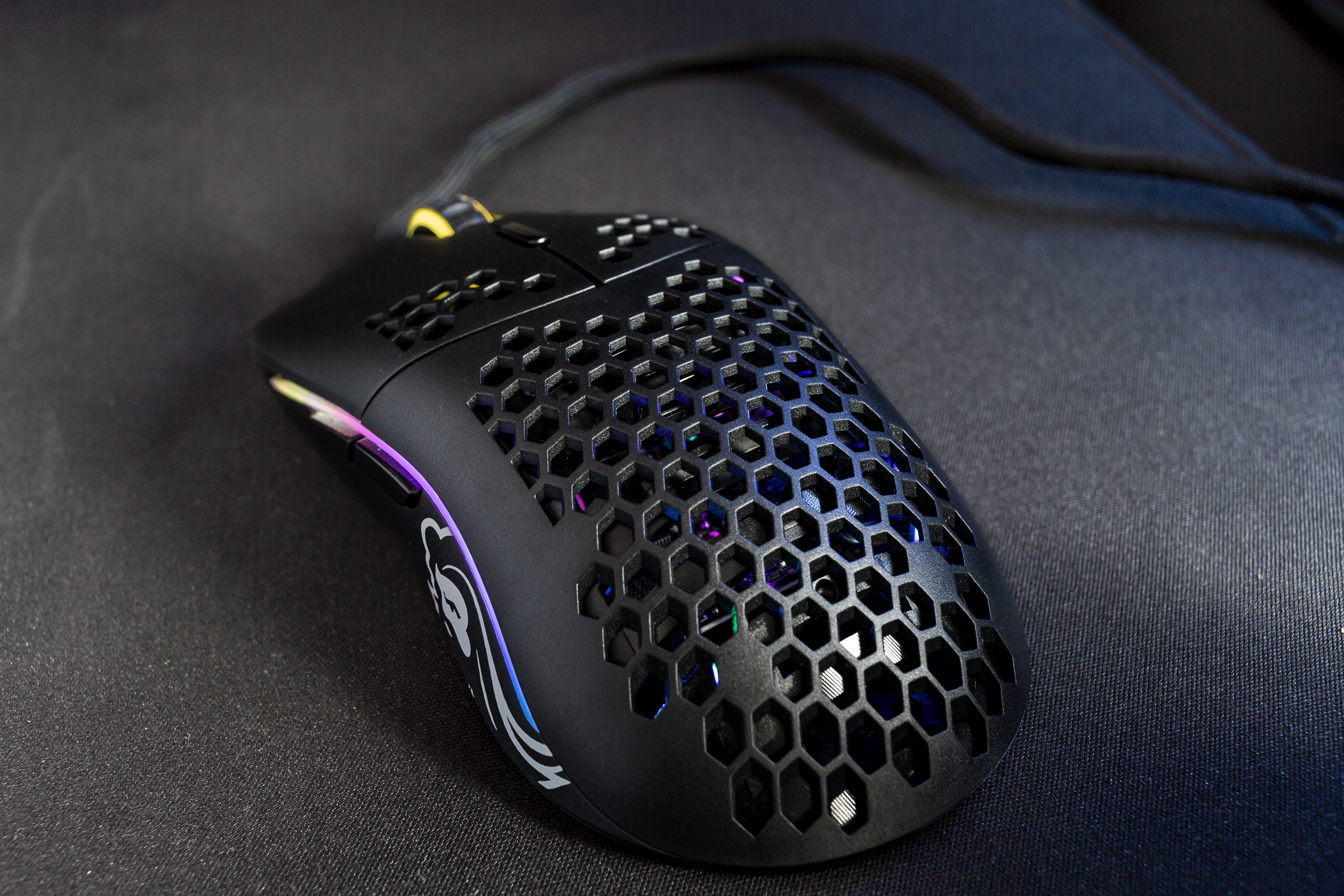 The Glorious Model O is a lightweight gaming mouse with a honeycomb exoskeleton design. While the holes in the mouse aren’t the most aesthetically pleasing, they do help cut down on weight. The matte black finish Model O weighs in at a mere 67 grams. Some enthusiasts may point out that the Model O is still heavier than the Air58 Ninja, but at this weight and in our experience, it’s hard to tell the difference unless you’re using a scale. While the Air58 weighs less on paper, it wasn’t noticeable in our opinion.

Something users will find on the Model O that they won’t see on the Air58 Ninja is the RGB lighting on the sides and scroll wheel of the mouse. The RGB lighting is one of those options that isn’t really necessary but adds value for people who enjoy a particular aesthetic with their gaming setup. The software makes it easy to customize pretty much every aspect of the Model O and is user-friendly for basic functions.

The Model O can have up to six DPI (Dots Per Inch) settings onboard at a time and includes a DPI shift button right under the scroll wheel, which is a common placement. Users will have to figure out if they wish to take advantage of the DPI range that the Model O offers by using a Pixart 3360 sensor. There’s a ton of flexibility with the Pixart 3360 sensor but it’s also just a solid sensor regardless of DPI setting. With such a lightweight mouse, it’s easy to feel like your movements become “floaty” after a while, but the sensor keeps mouse movement feeling crisp, accurate, and grounded without ever feeling sluggish.

A lot of the Model O’s great feel comes from its ambidextrous shape. The mouse feels comfortable and has a really nice height to the hump. While users with larger hands may have an issue with the shape, it shouldn’t be a problem for most right-handed users. The term “ambidextrous” can get a bit confusing, though. This isn’t a mouse with swappable side buttons. All buttons are set where they are and aren’t meant to be moved by the user.

The side button placement is comfortable, but we took issue with their quality. While the back side button is crispy and responsive, the front side button feels pretty “squishy.” Even when adjusting our grip to have easier access to the side buttons, the front button felt squishy and unresponsive compared to its counterpart.

Luckily, this isn’t the case with the main mouse buttons, which feel great and can hang in there with the best of the best. The mouse buttons don’t feel as good as the Logitech clicks, but they definitely have a quality feel to them with enough resistance to make the switches feel sturdy without hindering gameplay.

Glorious’ Ascended cord is light and reduces drag, but is admittedly a bit on the ugly side. It’s a puffy cable that doesn’t do much in the way of aesthetics, but its drag reduction is amazing. Meanwhile, Glorious’ G-Skates provide nice glide but showed signs of early wear when using a hard pad. Both of Glorious’ proprietary enhancements are impressive and their presence on the mouse makes it feel even more like a premium product.

With everything that’s been described above, this may seem like a $100+ gaming mouse. But the matte finishes of the Glorious Model O come in at just $49.99. The value here is nearly unbeatable. A lot of work went into creating this mouse and it shows. While the LEDs, G-Skates, and the Ascended cord aren’t expected additions at this price point, they echo what this mouse is all about—value and performance.

Aside from some issues with the front side button feeling lethargic, this mouse has been designed with the same precision it gives players in-game. The lightweight gaming mouse market had been dominated by FinalMouse, so seeing Glorious enter the competition in such a strong show of force is encouraging.

If users are on the fence about investing in a lightweight gaming mouse, this is the one that should make the decision easy. Low-cost and high-quality are terms that don’t normally co-exist, but the Glorious Model O marries them into a package that costs less than the mouse weighs.

The Model O can be difficult to get, but Glorious is transparent about stocking updates and uses Twitter to update fans almost daily. Considering the pricey alternatives, the Glorious Model O is more than worth the wait.