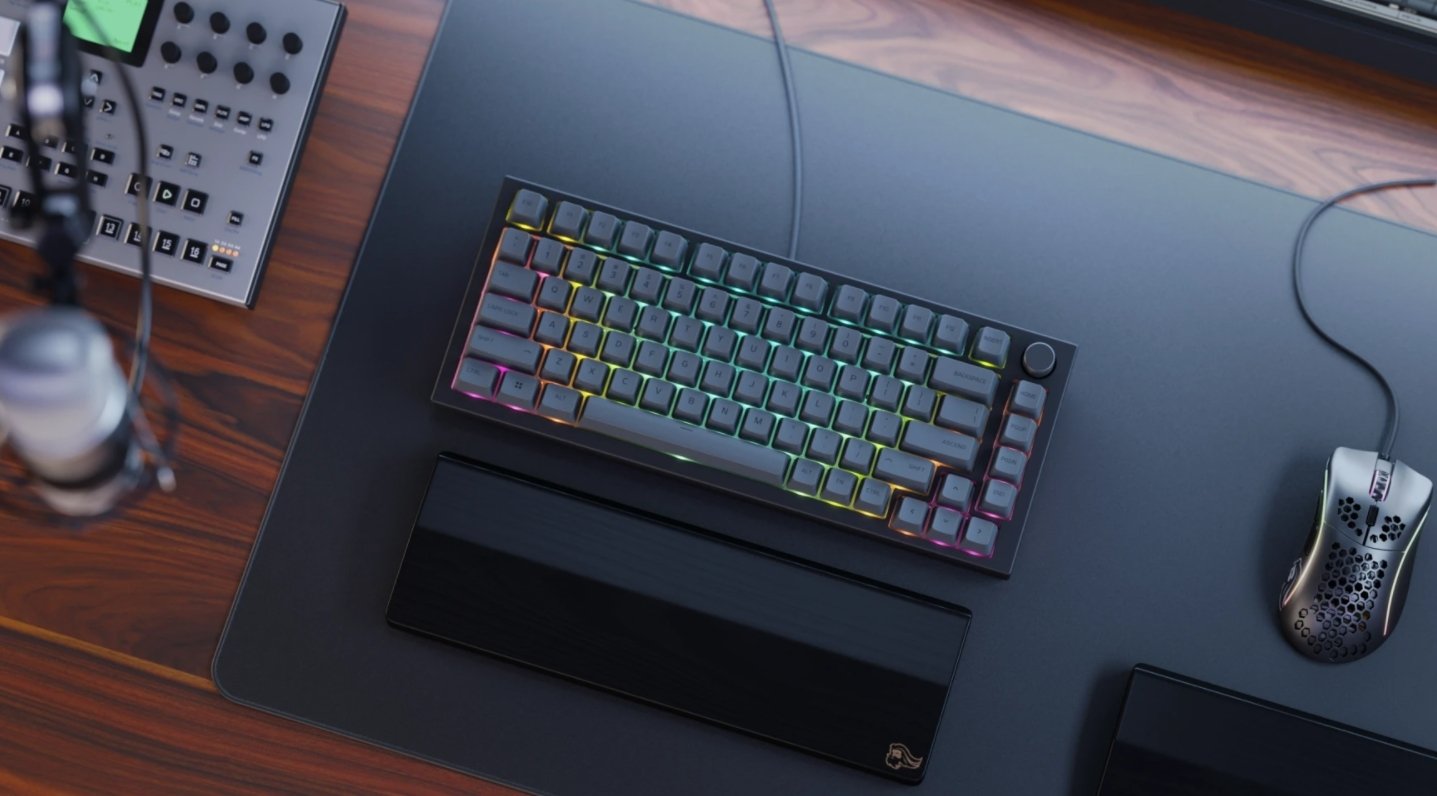 Shazim Mohammad founded Glorious company with the goal of providing players with the best tools at reasonable prices. The brand is sticking to its low-cost roots, with mice starting at $49 and fully-featured keyboards clocking in at $110. These products have more features and thus more baked-in value than most big-name brands.

After becoming somewhat of a runaway success story, the brand is tackling a new arena. The enthusiast keyboard community is rich with Group Buys and high-priced keyboards. Many enthusiast boards are near impossible to find. As with anything, the harder to find, the higher the cost. Glorious attempts to circumvent this issue by providing gamers and entry-level enthusiasts with an in-stock option for those curious about the hobby.

Glorious’ GMMK Pro keyboard melds gamer-friendly features into an enthusiast package to a high degree of success depending on your switch choice and preferred typing angle.

Nuts, bolts, and other bits

The GMMK Pro is a 75-percent hot-swappable keyboard with a programmable rotary encoder. This keyboard strikes a balance between gaming and enthusiast with RGB lighting and a fully aluminum body. We’re not talking about the usual “aluminum construction” that only features an aluminum plate. The GMMK Pro is the real deal, and as a result, it weighs over 3.3 pounds.

Users can choose several different plate options. Glorious offers a stock aluminum plate, a polycarbonate plate, and a brass plate. Each plate has its pros and cons, and it’s up to the user to decide which one is best for their needs. A polycarbonate plate might be better for those looking for a damper bottom out, while a brass plate might suit more aesthetically-minded users who aren’t bothered by a more pronounced bottom out.

It also comes with a new Glorious software suite called Glorious Core and supports VIA and QMK. Glorious’ Core software feels polished and straightforward without any head-scratching. If you’re new to VIA or QMK, it’s best to stick with Core. But if you’re looking to get into the enthusiast scene, this is a great way to start testing out new types of customization software commonly used within the scene. We recommend using VIA.

Glorious includes a centered USB-C connection, proving that it’s listening to community feedback. While this should be considered the standard in 2021, some brands lag behind and continuously omit a USB-C connection. Glorious centering the USB-C port also makes it easier for users to connect their keyboards. There’s no real worry about whether the six-foot cable will reach your PC on the left or right side of your desk. Sometimes you need that extra bit of wiggle room, and a centered USB port can be the solution. It’s not a unique quality by any means, but a centered port isn’t common in mainstream keyboards.

The brand’s GOAT stabilizers almost live up to their name. These are some of the best stabilizers around, and they should be for the price. The only caveat is that they might be over-lubed. There were a handful of instances where our unit’s spacebar got stuck. This issue occurred with both sets of test switches.

All of these features are knockouts considering the moderate $170 price tag. For reference, here is a closed Keycult Group Buy that shows how high the market goes and how deep the rabbit hole runs.

Comfort and where to find it

For those in need of some wrist relief, Glorious sells several styles of wrist rest. Using one of these options goes a long way in reducing fatigue and relieves pressure in the wrist. If you’re new to a fixed angle keyboard, it would be wise to pick up a wrist rest of your choosing to help zero the typing angle. Using a Glorious wrist rest is the easiest way to ensure your wrist rest fits the 75-percent form.

The most challenging aspect of the GMMK Pro to gauge is how each user’s switch choice will affect the gaming experience. Because the GMMK Pro ships without switches or keycaps in its Barebones iteration, there’s no standardized way to test this board. The absence of stock switches also means an additional cost that can easily jack the price up by $100.

Regardless of switch choice, users still get the typical n-key rollover to ensure their keystrokes are registered. Since this board is a hot-swappable keyboard, users can throw any number of switches into it. Players can run anything from a heavier, tactile switch like the 62-gram Purple Zealio V2 to a lighter, linear switch like the 45-gram Gateron Ink V2 Red.

We ran two options, and while both options seem viable, neither felt ideal. Glorious’ semi-controversial Glorious Pandas kicked off testing. These switches have an actuation point of about 1.5 millimeters and require 67 grams of force, making them a fairly heavy tactile switch. At first, these switches felt great for gaming. Most tactile switches aim to give the user a blend between the feedback of a clicky switch and the smoothness of a linear, but the Glorious Pandas actually come through on this promise. The feedback is appreciated while gaming, but the heaviness of the switches causes fatigue over longer sessions.

Switching focus to a more linear switch, we ran the Gateron Ink V2 Black switches lubed with Krytox 205g0. These linear switches have a two-millimeter actuation point that requires 60-grams of force to operate. While the operating force is higher for a linear switch, the lube helps create a smoother and more immediate feel that is more pleasant and stable than a standard Cherry MX Red switch. These performed fine over longer gaming sessions and didn’t cause fatigue like the unlubed Glorious Pandas.

While neither switch choice is ideal for gaming, these are two popular choices for newcomer enthusiasts to run in their first keyboards, present company included. If you’re looking for a more premium feel while retaining that traditionally responsive gaming experience, it’s probably best to run a more familiar switch from Cherry, Gateron, or Kailh.

Glorious also pops a keycap puller and switch puller in the box. These are inexpensive but essential tools to have for any hot-swappable keyboard owner.

A newcomer-friendly bonus is there’s no need to clip the additional legs on PCB-mounted switches. Clipping the legs off of switches is a time-consuming and mildly annoying task if you don’t have the right temperament or enough coffee.

Is the GMMK Pro good for gaming, and is it for you?

The GMMK Pro is complicated in that it is what you make of it. If you’re looking to bring an enthusiast switch to your comp or ranked matches, you might want to think again.

Using a combination of a fixed six-degree typing angle and a heavy switch can easily wear out your wrists. Linear switches can help, but it might be a bit of an adjustment if you’re not used to having a fixed typing angle. Sussing out the right switch type and wrist rest for you will play a massive role in determining whether the GMMK Pro is a good gaming keyboard option.

Despite the higher-than-average price, the GMMK Pro still presents a unique value. This keyboard offers users a fully-featured gaming keyboard in a premium package. Everything is here. From hot-swappable switches to RGB lighting and a rotary knob, this keyboard seeks to be a crowd-pleaser and succeeds. While it may not be as high-end as a nearly unattainable Keycult keyboard, it sure isn’t a G Pro X or anything comparable.