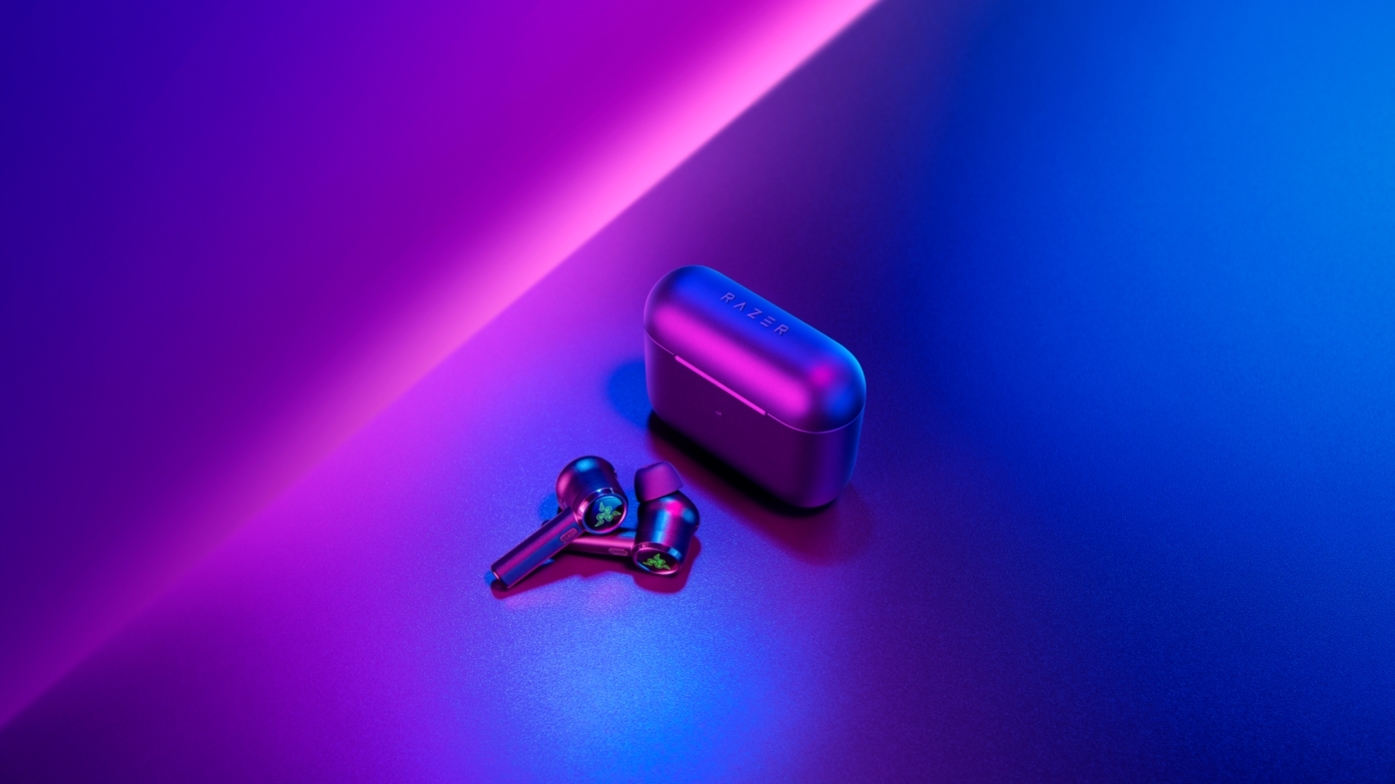 Razer’s Hammerhead True Wireless Pro earbuds are an intriguing solution for on-the-go gamers, but they do come with some caveats.

Given the company’s previous contributions to mobile gaming with the Razer Phone and Razer Phone 2, it’s more than logical for Razer to continue catering to mobile gamers. Razer updated its Hammerhead line with the Hammerhead True Wireless Pros and the results are a bit of a mixed bag. These earbuds excel in some areas but end up falling flat in others.

The updated earbuds sport a unique look thanks to the unmistakable Razer logo blasted on each earbud. The classic black and green colorway looks exceptionally sleek, especially with its matte black finish. The charging case matches the earbuds’ finish and can charge using the included USB-C cable. It would have been nice to get a longer cable since the included USB-C cable is only about 20 inches from tip to tip. It’s not the shortest cable by any means, nor is it a deal-breaker.

The battery life on the earbuds themselves is a weak four hours. While four hours may seem like a decent amount of time, longer gaming sessions might be interrupted, especially if the earbuds aren’t fully charged. This is one of the larger issues with these earbuds since you can’t just plug them in and keep using them like you would a standard wireless headset, like the Razer Blackshark V2 Pro Wireless. The last thing you’d want to worry about is if your earbuds are going to die in the middle of a match. This issue is easily offset by proper planning and charging.

The 10-millimeter drivers are surprisingly powerful and likely contribute to the shorter than average battery life of the earbuds. Between these earbuds and the Blackshark V2, Razer is absolutely nailing bass lately. Our reviewer first started testing the Hammerhead True Wireless Pros by listening to music and it was legitimately shocking. The sheer volume the Hammerheads are capable of is impressive and the bass stays rich without muddying up the track. If there’s anything that makes up for the short battery life, it’s the mammoth sound coming out of these little monsters.

Razer provides three different types of tips: three SmoothComfort black silicone, three SecureSeal translucent silicone, and one pair of Comply memory foam tips. Both silicone options come in sizes small through large, while the included Comply tips are a size medium. To our reviewer’s surprise, the SmoothComfort tips were their favorite. Our reviewer normally prefers memory foam tips like Dekoni Bulletz and thought the Comply tips would perform similarly, but they felt stiff and were a bit of a letdown. The Hammerhead True Wireless Pro earbuds benefit greatly from a solid seal across the board. All of the included tips create a tight seal, provided you use the size that best suits your ears.

The active noise cancellation nearly drowns out the sound of cars passing by on a busy street. Users can turn active noise cancellation on and off by pressing and holding either earbud for two seconds, but there’s also a Quick Attention Mode that can be activated through the same gesture. It’s a useful feature, but the number of controls loaded onto the earbuds can cause some confusion. For instance, you may try to toggle the Quick Attention Mode, end up skipping several songs inadvertently, and still not have Quick Attention Mode active. Granted, this process gets easier over time, but it still feels like the controls don’t register as accurately as they could.

The Hammerhead Wireless Pro earbuds are also accompanied by an application that lets users control EQ presets and check in on each earbud’s battery life. We’ve heard of users having issues with the application, but in our reviewer’s experience, things have been straightforward and helpful overall. The app has several EQ presets, but only the THX and Enhanced Bass presets achieve a striking sound. The worst offender here is the Enhanced Clarity preset that turns the Hammerheads into sibilant tin cans. Every user will have their own preference, but the THX preset is easily the most balanced of the included presets. Users can also customize their own preset.

Gaming performance is comfortable on mobile but is less than ideal on a laptop. Call of Duty: Mobile sounds great for a mobile game in general, but the Hammerhead Wireless Pro earbuds ensure that each bullet lands with weighty bass. After spending some time gaming on a mobile device, it’s clear that mobile gaming is the intended use for these earbuds. This is highlighted further when attempting to game on a laptop. There’s a compressed quality to the audio while mobile gaming, but it’s nothing compared to the extremely uncomfortable experience when used on a laptop.

Due to the finicky nature of the onboard Bluetooth on many motherboards, prospective buyers will want to be aware that these might not work well with all Bluetooth-enabled PCs. Our reviewer had no issue connecting on a laptop, but on a desktop with a Bluetooth-enabled motherboard, they became desynchronized from each other after crackling like a campfire. This happened over and over again. Our reviewer updated drivers, rolled back drivers, followed Razer’s troubleshooting steps, moved locations, but nothing improved the spotty connection. The Hammerhead Pro Wireless earbuds aren’t necessarily aimed toward traditional desktop PC gaming, but not being able to reliably use a desktop was a bummer. This is more a comment on limiting prospective buyers’ compatibility expectations than it is a criticism about the earbuds’ quality.

The Hammerhead True Wireless Pro earbuds provided an uncomfortable experience while using a gaming laptop. The sound stage was non-existent and the entire experience felt claustrophobic. There’s near a zero percent chance the user will be able to accurately pick up on footsteps or any other audio cues. Overwatch proved especially uncomfortable. The soundstage became so congested that it was near impossible to differentiate between noises. This discomfort was experienced with active noise cancellation both on and off, though it was definitely exacerbated by it being on.

In terms of microphones, the Hammerhead True Wireless Pro earbuds have a beamforming microphone located at the bottom of each earbud. The microphone is suitable for taking calls but shouldn’t be relied on if attempting to communicate with teammates.

Overall, the Razer Hammerhead True Wireless Pros were a bit of a letdown. While they certainly hit the intended mark for mobile gaming and music listening, the lack of versatility is disappointing. With so much power coursing through these earbuds, it’s a shame that they’re limited in terms of application. Unless you’re heavily into mobile gaming, these earbuds will likely be an underwhelming investment.