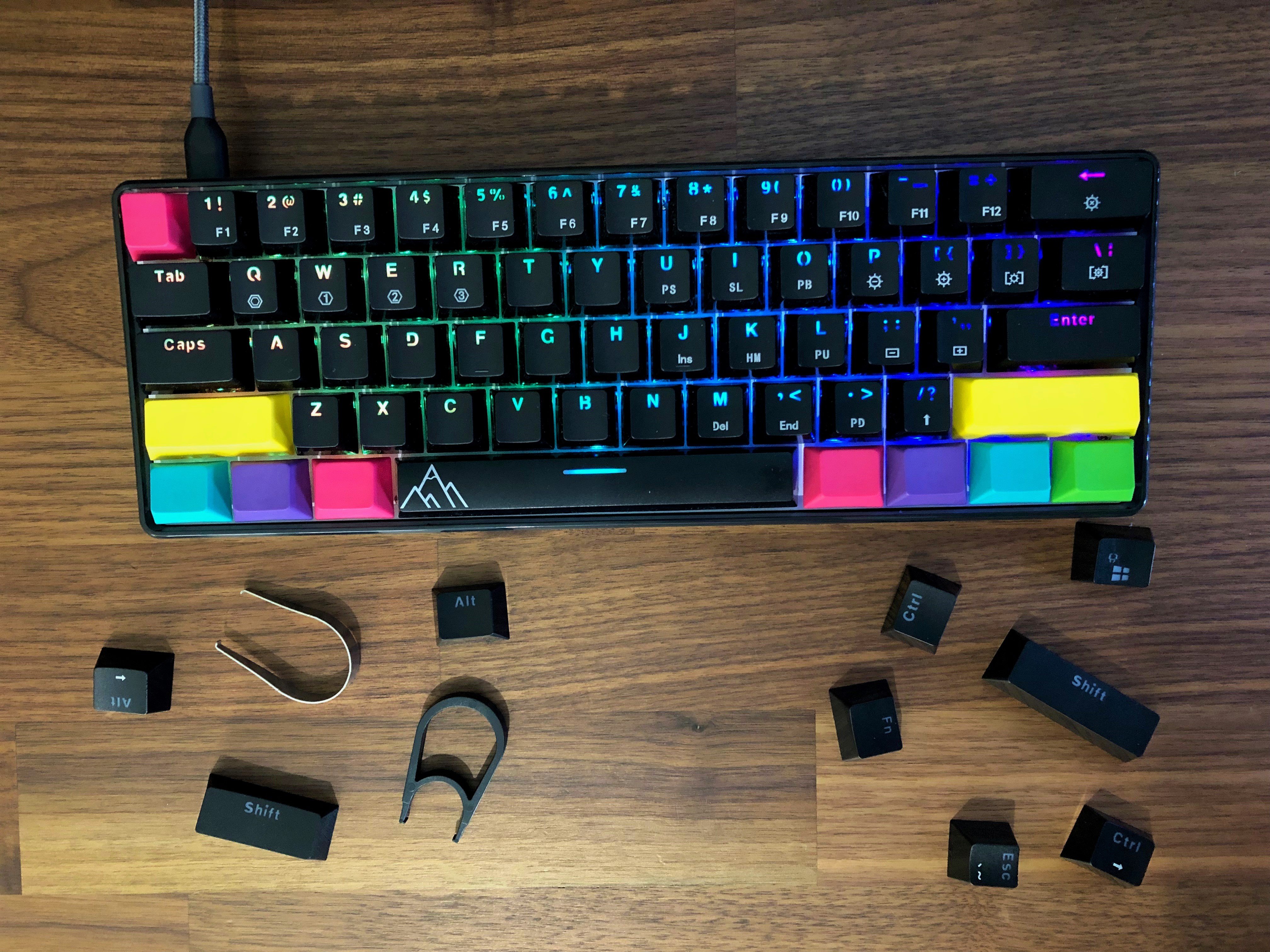 This year has seen some massive strides forward in the gaming peripheral market and most of them have come at a premium. While the Asceny One keyboard doesn’t do anything new, it does a lot right at a highly competitive price point.

Boasting several of the market’s most important buzzwords of the year, like hot-swappable and optical, the Asceny One takes these features and compiles them into a tiny, forward-thinking, and budget-friendly package—albeit with some flaws.

The Asceny One is a 60 percent keyboard that boasts flexibility with its hot-swap PCB. But the kicker here—and what really makes this keyboard of interest—is the optical switches. Asceny’s use of optical switches is pretty interesting. Given that there aren’t many readily available optical switches, the decision to make a hot-swappable optical keyboard is decidedly forward-thinking in the sense that it banks on there being as many varieties as there are with mechanical switches. With few optical switches out there, consumers only have a couple of interchangeable options to select from at the moment. Asceny is aware of the limited options out there, but with a company like Razer making its own proprietary optical switches, it makes sense why Asceny would want to move in this newer, yet risky, direction.

There’s no doubt that the keyboard can perform, but something that may take users a bit to adjust to is the mushy feel of the switches. Compared to a traditional mechanical switch, the bottom out of the Gateron Brown opticals feels a bit anticlimactic at first. Luckily, this is extremely easy to adapt to and even comes with an odd little bonus. Due to the softer feel, users may find that their keystrokes are a bit quieter than when compared to mechanical switches. It’s a bit of give-and-take at first, but the end result is more or less the same. And just to be clear, this is an optical keyboard, which means mechanical switches won’t fit into the hot-swap PCB.

Aside from the use of optical switches, another thing that makes this keyboard stand out is the feel of the stabilizers (stabs). While using quality stabs seems like common sense at this point, these feel far superior to even that of the Glorious GMMK Compact. These stabs help lower the rattle upon bottom out and provide an overall mellow tone to each keystroke. It’s a small thing but it makes a huge difference at this price point.

Users can also expect to see some RGB effects here with programmable profiles. It sounds all well and good, but this is probably the biggest pitfall of the Asceny One and really the only time it shows itself to be a budget board. The software used to customize RGB lighting profiles on the keyboard is a bit tedious to download. It isn’t uncommon for smaller companies to use host sites for downloads, but this software requires additional software to open the .rar file. It isn’t a huge deal, but for users who aren’t familiar with this type of software, it’ll likely trigger a red flag. There are also a few effects baked into the board and they’re accessible with a few keystrokes, which is a nice alternative for users who don’t want to download any additional software.

Another oddity to this board is the fact that there’s a microphone in it that’s used for an audio visualizer RGB effect. It’s altogether neat, completely unnecessary, and mildly creepy. We found ourselves unplugging the keyboard when not testing it based on sheer paranoia. Conspiracy theories aside, this feels like a big missed opportunity. The money spent on this could have easily gone into providing users with adjustable feet or another highly-desirable feature, like an aluminum case instead of plastic. This is one of those features that will be highly divisive on a user to user basis. For us, it really just seemed like a missed opportunity to do something else instead.

Added bonuses here include some neatly colorful keycaps similar to those seen on the Anne Pro 2, spillproof PCB, and the use of a USB-C connection. Both the keycaps and USB-C connection lean toward the future due to customizability becoming a more requested feature and USB-C being regarded as the future-proof connection method. These features are really nice to see on a budget board.

The double shot ABS keycaps actually feel pretty sturdy. The keycaps are interesting in terms of look, with glossy sides and matte legends. It’s an odd choice that doesn’t help or hinder in this scenario.

We think we’ve seen a similar keyboard out on the market before, though. It seems that Asceny doesn’t manufacture in-house and instead chose to rebrand a preexisting design. While this sounds like a weird practice, it’s fairly common for other companies to outsource manufacturing or slap their label over a preexisting product. We were pretty unfazed by this revelation and found it to be a smart move on Asceny’s part. While we don’t know what the company’s grand idea is, it would make sense to use a strong preexisting design to be able to cover costs for making proprietary peripherals down the road—but this is merely speculation.

Overall, the Asceny One is an impressive budget offering that takes its commitment to the future of competitive gaming seriously and at a comparatively meager price of around $59.00. If you’ve been curious about trying out optical switches but are afraid to commit to a more expensive option, then the Asceny One will do well on your desk.

Despite the odd inclusion of a microphone and the weak software, the company seems keen on making big moves to improve upon its first entry into the market. If you do choose to pick up the Asceny One, make sure to read the included letter, which gives you a great idea of who the people are behind the company.