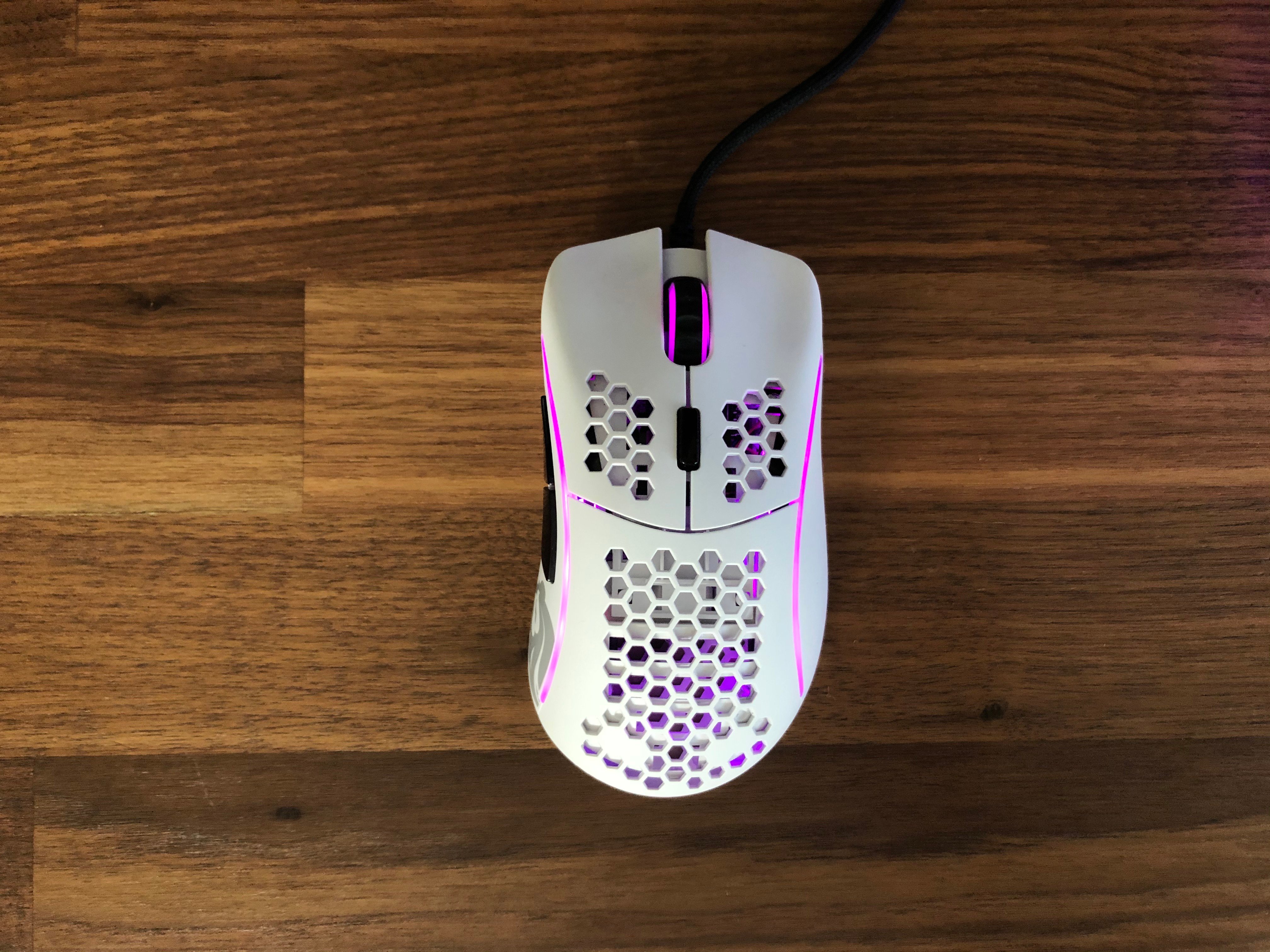 Glorious single-handedly created the lightweight mouse race of 2019 by directly challenging Finalmouse’s Air58 with its cost-effective Model O. Since the Model O’s initial release, Glorious has dabbled in shrinking its winning formula with the Model O- and now the company is providing gamers with a featherweight ergonomic design in the Model D (Please hold your jokes until the end of this review).

Packaging might sound like an odd place to start, but it can inform how much a company is charging you for things other than the product itself. Fancy packaging will likely always drive the cost up by at least a few cents, so seeing Glorious keep packaging minimal despite the company’s recent successes is heartening in terms of goodwill among gamers.

At first glance, there isn’t much new here. Glorious fans will be happy to see the return of the honeycomb shell design with solid sidewalls clocking in at just 68 grams. While Razer has been pushing a solid shell lightweight design that’s extremely impressive, Glorious has the honeycomb design on lock and the fan base to justify a lack of reform in this department. If it ain’t broke, don’t fix it.

There’s also the included RGB lighting strips on the sides of the mouse as well as an illuminated scroll wheel. These are all features that keep with the Glorious design language. The features themselves aren’t subtle but they never feel overly gaudy or unnecessary. There are just enough lighting strips and honeycombs present that many gamers will be willing to give the mouse a shot given the company’s stellar reputation.

We were a bit disappointed to find that even with all of the improvements made to Glorious’ mouse line, the RGB was still a bit lacking. Users will be able to spot individual lights. While this doesn’t seem like an issue, it can be a bit annoying when running RGB effects like the wave effect where the individual lights really show. This is one of the only times the Model D will feel like a budget option and it’s certainly the least of any gamer’s concerns when it comes to mouse performance.

The branding on the Model D is tastefully done yet again. The word “Glorious” is gracefully placed on the front right side of the mouse while the Glorious logo is presented a bit larger on the back left sidewall of the mouse, just behind the side buttons. This is the same branding Glorious has used with the rest of its mouse lineup and it’s a great design that’s aged well over the past year. Again, it isn’t subtle by any means, but there’s a clear level of thought that feels uncommon with mainstream peripherals that just place logos in awkwardly aggressive positions.

Aside from the shape, things are more-or-less the same. Users will still get the DPI button in the center of the mouse, an indicator LED on the bottom, and two side buttons. The scroll wheel is nice with a good in-between of not being too tactile or too loose. Like other Glorious mice, the Model D ships with an esports industry-standard Pixart 3360 sensor that will suit every player from casual to professional.

One great change Glorious has made is to the Ascended cord. The ascended cable is Glorious’ proprietary paracord. There were allegedly some issues with the initial design that caused connectivity issues. We never experienced these issues with our first run copy of the Model O, but it’s something that warranted some tinkering and Glorious delivered. The Ascended cord is nowhere near as ununiform in shape and width but still retains great flexibility. It has the look of Razer’s Speedflex cable but with a bit more flexibility to it.

Glorious’ proprietary G-Skates also feel a bit thicker than the initial Model O. Made from the same 100-percent virgin PTFE feet, Glorious has upped its game by including additional G-Skates of the same material so that users can customize their Model D to their liking. Offering users additional customization options like the ability to have larger mouse feet than the stock form is a big win in our book. There are a lot of lightweight mice out there and while some mice use gimmicky customization, this is meaningful customization without an unrealistic premium placed upon it.

The difference between the stock four corner feet and attaching the larger mouse feet is immediately noticeable. It’s neither a negative or positive as it’s solely a subjective matter. We could go either way, to be honest, but for users who crave that extra layer of customization, this is a solid option.

Holding the Model D in your hand is where things begin to get interesting. The right-handed ergonomic design is comfortable but might be a bit too large for users with smaller hands. Some users experienced the same problem with the Model O at launch, but this issue was later remedied with the launch of the Model O-. There’s no guarantee that Glorious will launch a smaller ergo option in the future, but this would certainly score the company even more points with gamers.

Coming in at about 69 grams and only $49.99 for matte models or $59.99 for gloss models, the Model D continues to keep Glorious in the limelight during what has been a chaotic year or so of lightweight mouse launches. Many have tried but Glorious is seemingly the only company that has succeeded in providing the lightweight gaming experience at a budget cost. It’s hugely impressive but there are a few cracks in the plan, mainly the side buttons.

The one issue we’ve taken since our initial review of the Model O is that the side buttons become mushy after a few uses. Something about the way these side buttons are designed gives them a squishy feeling that’s off-putting. It’s again one of the few times the Model D feels like a budget option. We chalk this up to the need to keep the mouse’s weight in a competitive range.

The cheap feeling of the side buttons could be weight-related. It seems odd that Glorious would keep this part of the design after working on the Ascended ord. The actuation point also isn’t uniform along the length of the rear side button. It’s led to many missed clicks, misclicks, and panicked double-clicks. The DPI button also suffers from this issue but the mouse one and two buttons are still gloriously clicky and responsive. We just wish we could say the same for all of the mouse buttons here.

Overall, the Model D is a highly comfortable addition to Glorious’ growing mouse lineup. The ergonomic shape is solid, but it may present some size issues for users with smaller hands. A few great upgrades, like the feet extensions and new Ascended cord, really help temper some of the Model D’s flaws, like the side buttons and DPI button.

The software is also a bit annoying here since there’s no all-in-one suite and downloading new software for each Glorious product is a bit obnoxious. But the Model D still remains a featherweight ergonomic champion due to its reliable sensor, solid shape, and highly competitive price point.