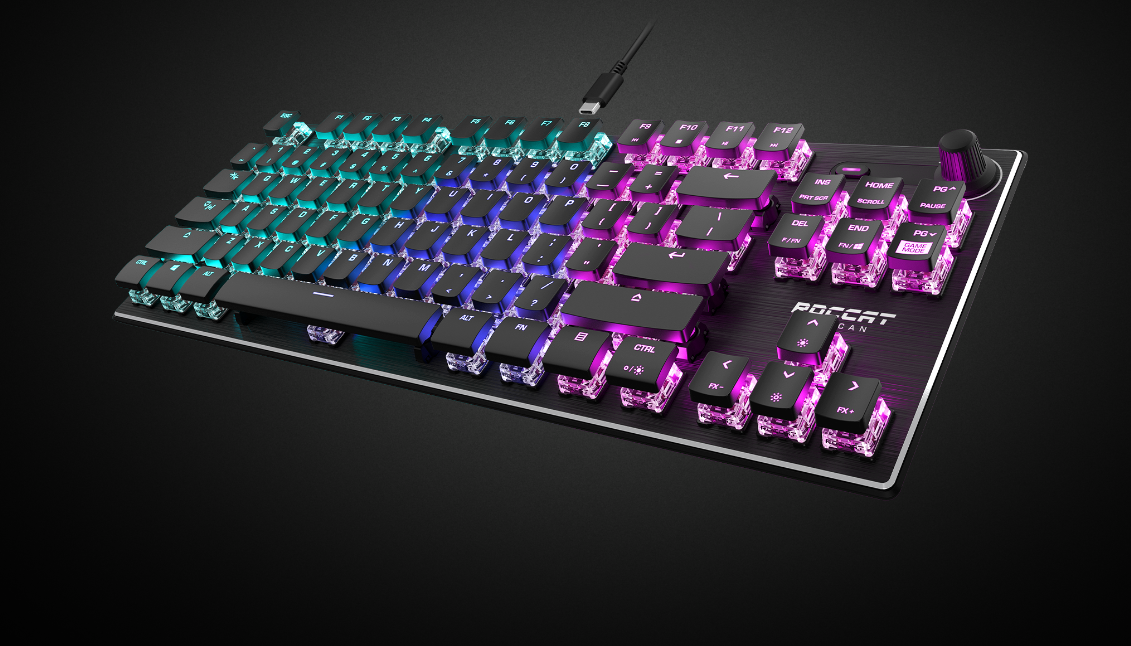 ROCCAT has been around the peripheral block for a while, but the company’s latest mouse and keyboard releases are some of its best to date.

The lesser-known peripheral brand has been on the rise since Turtle Beach acquired it in 2019. Boasting some of the most unique-looking peripherals, ROCCAT’s distinct aesthetics may be divisive, but they’re recognizable from a mile away. Each product shares the same design language with a build quality that feels on par with its competitors.

ROCCAT’s Vulcan TKL puts its best foot forward to meet modern keyboard standards but is weighed down by clunky software and a couple of questionable design choices.

A lot of keyboards come across our reviewer’s desk, but few have the visual impact of the Vulcan TKL. Not only is it an interesting-looking keyboard, but its volume knob sticks out right away. Many full-size keyboards feature a volume control of some sort, but it’s pretty rare to find a knob like this on a TKL keyboard. Glorious is changing this with the upcoming 75 percent GMMK Pro, but the Vulcan TKL and SteelSeries Apex Pro TKL are the only other boards that come to mind. Adjusting volume without using the Fn key or tabbing out is especially appreciated since it doesn’t require the user to tab out of a match to adjust game volume.

The design is striking for a few reasons, aside from the volume knob. Normally, the style of keycap included on the Vulcan TKL accompanies a low-profile switch, but this is not the case here. Instead, the keyboard features full-size switches and semi-dished keycaps with a flat design and exposed stems. It makes for an interesting look that seems a little unnecessary, considering it doesn’t help with the RGB lighting diffusion.

Another aspect of this keyboard users might notice right away is the keyboard icon on the host side of the USB-A connector. It’s a simple but effective touch since it makes cable management a bit easier by eliminating the guessing game when unplugging USB cables from the back of your PC.

Titan switches for the win

A major selling point of the Vulcan TKL is the Titan Linear switches. These are ROCCAT’s proprietary mechanical switches that have an activation point of 1.4 millimeters and an actuation force of 45 grams. This is .6 millimeters less than a standard Cherry MX Red switch, making ROCCAT’s proprietary switch faster than both HyperX and Cherry MX switches.

While these switches are faster on paper, the keycap design makes them feel a bit stiff. This is not to say that they aren’t responsive, but it may take some getting used since the stem of the keycap is reinforced by the housing that surrounds the key switch stem. The added support makes the keys feel more stable than an average Cherry MX style switch, but it does present a noticeably different feel.

One standout aspect of these key switches is how they help reduce stabilizer rattle. Rattling stabilizers are a huge pitfall of almost every mass-produced gaming keyboard. Logitech, Razer, and HyperX are all guilty of skimping out in the stabilizer department. ROCCAT skirts this issue with its key switch stem design that encompasses the keycap stem and fills out stabilizer housing, leaving no wiggle room for stabilizer rattle.

Not all software is created equal

There’s practically no such thing as user-friendly proprietary software, but ROCCAT’s software feels rougher than most. There are way too many things going on at once, with some features feeling near useless.

One of the strangest features of the Swarm software is the sound options. Users can choose to have audible feedback come through their speakers. These options include a typewriter noise, a clicky noise, a laser sound, and more. Why this is the first feature presented to the user is anyone’s guess, but it’s a definite misfire and feels like a waste.

Aside from an unfriendly UI, the software offers standard customization features. The RGB lighting zones are fun to customize in particular, and there are some unique RGB presets that set the Vulcan TKL apart from other keyboards in its class. If you can get the hang of the interface and don’t mind the other useless features, this software may not be the worst option out there.

ROCCAT’s Vulcan TKL has a neat feature set that is almost on par with the industry’s heavy hitters, but it falls a bit short in its execution. At this price, users should expect to see dual-layer flip-up feet, but this isn’t the case here. Instead, ROCCAT skimped out on the second layer of feet and only included one level of adjustability. It’s disappointing that a keyboard at this price doesn’t include more adjustability options.

Our reviewer has seen a lot of keyboards claim to have an aluminum construction, but most end up just featuring an aluminum top plate. The Vulcan TKL falls into the same trap the Razer Huntsman Mini finds itself in by only featuring an aluminum top plate. The issue here is the noise created by the metallic ping bouncing around in the empty plastic body. It doesn’t create a pleasant noise, and it may be a bit annoying to some users who buy linear switch keyboards specifically to avoid more noise than necessary.

The ROCCAT Vulcan TKL may not be the most traditional-looking keyboard, but it leaves a strong impression backed by responsive keys and modern features like a volume knob and a detachable USB-C cable.

Because the Vulcan TKL finds itself at a relatively high price for what it offers, it’s tough to give it the green light as an easy recommendation. The software feels like it got lost in trying to provide something fresh with its auditory feedback. Our reviewer would have preferred that effort and money be put into an extra layer of adjustable feet than a feature most people won’t want or need.

The saving graces of this keyboard are the volume knob, unique look, and speedy switches. While each of these positive attributes comes with a caveat, there is no denying the positive impression the keyboard leaves. It tries new things, accomplishes most of what it sets out to, and performs well in-game.

If you’re in the market for a new keyboard and want to try a reliable brand that doesn’t get the attention it deserves, this is a great option that can help your setup stand out without sacrificing speed or performance. You may be paying for some useless features, but the core package is a solid one.