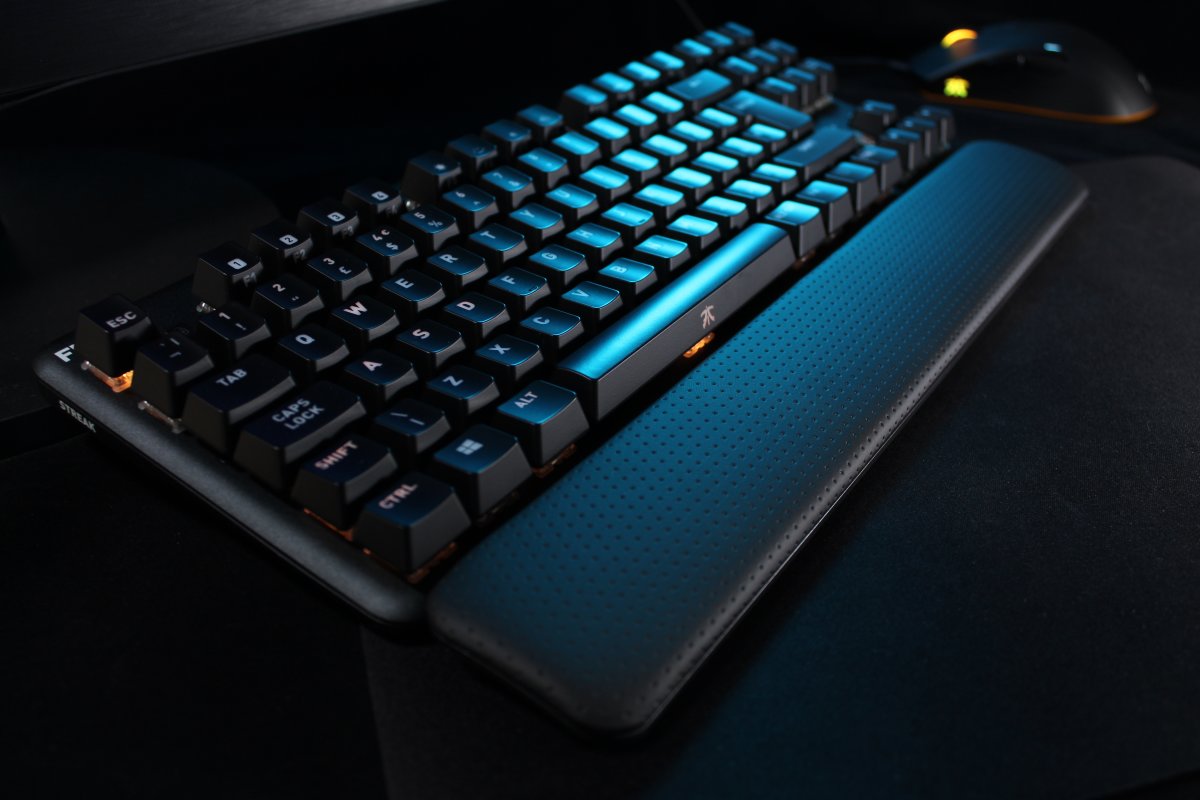 Fnatic’s line of esports-focused gaming peripherals has expanded to include two keyboards, the Fnatic Streak and the mini-Streak. The keyboards, priced at $130 and $100, respectively, are lightweight and thin without compromising on quality. Fnatic claims the keyboards are some of the thinnest on the market—and at just over one inch at its thinnest point, we believe it.

Bulky gaming keyboards have been out of vogue for some time now, and esports-focused ones have been getting more and more similar over the years. Sleek black peripherals with RGB lighting are the norm, but Fnatic’s new offerings do stand apart for their size. Fnatic is offering two options with regard to length, the full-size version and the tenkeyless. The tenkeyless mini-Streak knocks even more weight and length off the already light which is good for gamers who travel often.

There’s no hiding that Fnatic’s Streak devices are gaming keyboards. They’re bright, with exposed RGB lights. But Fnatic kept them sleek with their minimal design, which is a plus. The rounded-edges, while not as attractive as sharp edges, were designed for player comfort, as is the detachable wrist rest. There are some good points and bad points for the wrist rest—it’s adjustable, with three levels that cater to different wrist and palm sizes, but the build is finicky. Because of the design, the cushion is detachable from the metal shell, and we had trouble keeping the wrist rest stable.

It’s an interesting design that attempts to solve a very real problem with keyboard wrist rests. But in practice, it didn’t feel as secure as it needed to be.

Customization throughout the rest of the keyboard is relatively easy, however. The Fnatic OP software is still being worked on, and not all options are available right now. But it’s easy and quick to change between eight lighting options. Users can also choose lighting profiles through the keyboard itself, but it’s definitely not as intuitive as using the software.

The full-sized keyboard has dedicated media keys built onto the top, right-hand corner of the device. There’s a volume wheel for sound increase and decrease, with mute controls for audio and mic. A button for “competition mode” easily turns off the keyboards extraneous features, too—like the Windows key—which is a nice little feature that makes the keyboard truly esports ready.

Unfortunately, the mini-Streak doesn’t have its own volume slider. The volume is tied to the keyboard’s function keys instead, which isn’t nearly as easy as the volume wheel. Likewise, the mini-Streak is missing the full-size’s rapid USB pass-through port.

As for keys, the two Fnatic Streak keyboards use the German Cherry MX switches, which are widely considered industry standard. Both keyboards come in four different switches—red, silent red, blue, and brown. Our review units use the Cherry MX Blue switches, and they’re exactly as you’d expect blues: they’re loud with the audible click and a satisfying tactile bump. You’ll want to choose the switches based on your switch preferences. A loud keyboard with a tactile bump isn’t always preferable for gaming. Some players will prefer a quieter, smoother click that requires less pressure to push.

Like with many keyboards, you’ll want to try out the Fnatic keyboards before purchasing. Both the Streak and the mini-Streak are good, quality keyboards that hold up with other big name gaming brands like Logitech G and Razer.

Pros: Both keyboards have strong customizable features that hold up to other gaming brands. The price isn’t too high, either, and really reasonable for the price.

Cons: The mini-Streak doesn’t have the same scroll wheel as with the full-sized version. The biggest con for some will just be personal preference—do you like the rounded edges and RGB lights? If not, look elsewhere. Likewise, the wrist rest can use some improvements.