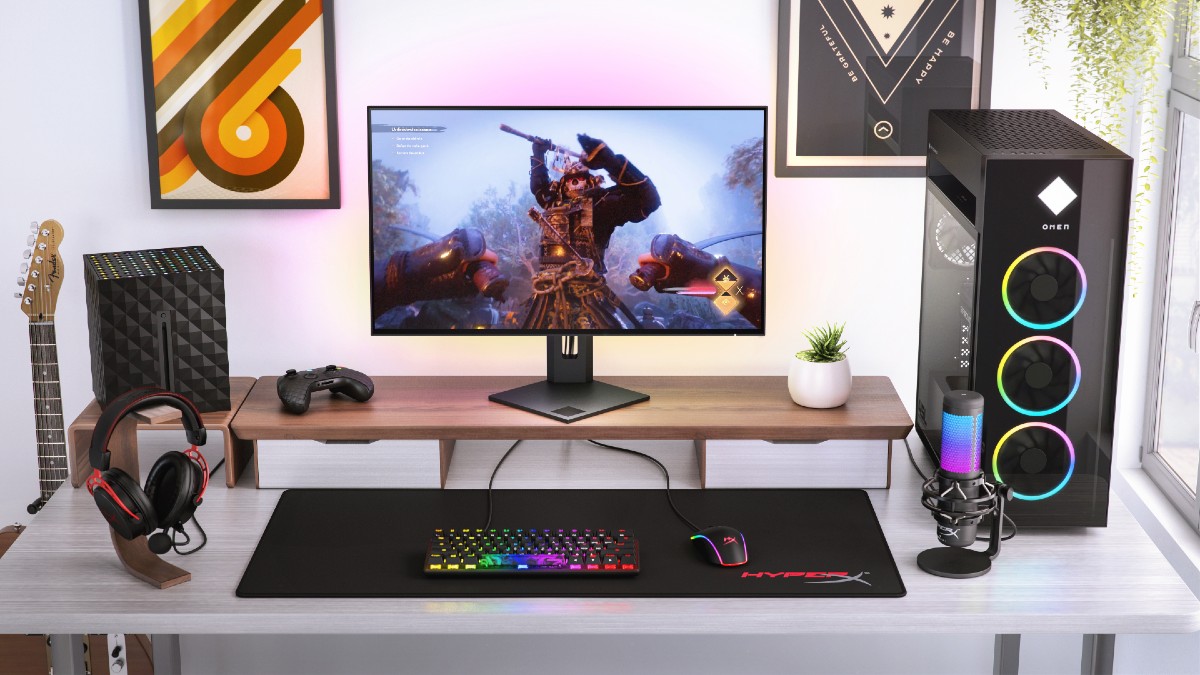 HP’s coming to CES 2022 with a range of gear like gaming PCs with the new Cryo chamber technology, a 4K gaming monitor, and the launch of a lifestyle-orientated subbrand. The company will also sell its Omen cases directly to PC builders for the first time.

The new HP range is designed with different types of gamers in mind. The company knows that gaming isn’t confined to any age or demographic and is a universal way for people to interact and have fun with like-minded friends from across the world. With this in mind, HP is making products to appeal to all types of gamers whether they’re casual players or die-hard enthusiasts.

There are three desktops in the new Omen lineup geared towards a different type of buyer.

The Omen 45L is HP’s top-of-the-range gaming PC designed for tech-savvy customizers and enthusiasts who want the best and will probably modify it further with custom components. It’s the first Omen PC to use the company’s new Cryo Chamber technology for better cooling, and it’s compatible with most industry-standard components.

HP ensures the Omen 45L can support the latest Intel Z690 motherboards and the Intel i9-12900K processor, as well as AMD’s Ryzen Zen 3 motherboards with up to Ryzen 9 5900X processor. This PC can also accommodate the latest Radeon RX 6700 XT and Nvidia RTX 3090 GPUs. Thanks to its massive size, the 45L can accommodate up to seven 120-millimeter cooling fans and liquid cooling radiators up to 360 millimeters.

The 45L features the new Cryo Chamber design that takes the CPU radiator and moves it into a separate compartment at the top of the case. It’s designed to be quieter and more efficient than traditional cooling systems under full load.

The Omen 45L is expected to drop later in 2022, but buyers can check out the 40L on the HP store now. This model is essentially the same PC as the 45L without the Cryo Chamber. Like the 45L, it’s geared towards customizers and buyers who frequently upgrade their equipment to keep up with the latest technology.

The 40L has the same compatibility as the 45L and can also fit the latest Intel Z690 and AMD Zen 3 motherboards and processors. However, its smaller size restricts the number of 120mm cooling fans to six and limits the liquid cooler radiator size to 240mm.

The 25L is the entry-level PC in the Omen range, and it’s targeted at gamers who love to play but don’t like to spend much on equipment and rarely upgrade.

It comes in black like the other Omen models, and it’s also the first PC in the range to come in the Ceramic White alternative. Despite its smaller size, the 25L can still accommodate the latest Intel and AMD motherboards and processors, and it’s available with up to the Nvidia RTX 3080 or AMD Radeon RX 6700 XT.

HP offers three alternative cooling solutions since the smaller 25L can’t accommodate the same cooling features of the 45L and 40L. The first is a 120-millimeter RGB liquid cooler, and the second is an air cooler with a 92-millimeter fan. Lastly, there’s another air cooler available with two heat pipes and RGB lighting. A 120-millimeter system fan comes standard on the front of the 25L.

Due to many requests from customers, HP is releasing its first case to the public. The 45L case is the same one used on the PC and includes the Cryo Chamber cooling system.

HP designed the 45L with compatibility and future-proofing in mind, so it’s compatible with most industry-standard components like power supply units, GPUs, and air and liquid cooling systems.

Victus is a new sub-brand under the HP banner, and it’s made for what the company calls “escapist gamers.” These players aren’t as tech-savvy as the Omen users and want a do-it-all PC that’s equally at home playing games or consuming media or for working. They also tend to play more single-player games like the Sims 4 to forget about their problems and aren’t into competitive games like League of Legends or VALORANT.

The 15L is the first desktop in the Victus range and comes after the already-released laptops. It’s a compact PC that’s easy to use with four front-facing USB-A ports and a USB-C port. The 15L features the V-shaped Victus logo with infiniti lighting to distinguish itself from the Omen range with a square logo.

Compared to the Omen range, the 15L is available with lower-tier graphics cards going up to the Nvidia RTX 3060 Ti and the AMD Radeon RX6600 XT. Its design still allows users to upgrade the GPU, memory, and storage if they need more performance.

HP’s last new product at CES 2022 is the 27u 4K gaming monitor. This monitor is designed to provide fast speeds and excellent picture quality for both PC and console players and comes with a stylish design.

The Omen 27u has a 27-inch IPS screen with HDR capability. It’s ready for the latest consoles like the PlayStation 5 and Xbox Series X, with HDMI 2.1 support and 4K UHD resolution at 120Hz.

PC gamers aren’t left out, and the 27u includes a DisplayPort 1.4 and a 144Hz refresh rate. AMD Premium Pro is included to improve gaming performance and prevent screen tearing.

Designwise, the 27u has a couple of firsts for an HP monitor. It’s the first monitor in the Omen lineup to feature addressable RGB lighting and Omen Light Studio compatibility. There are also two down-firing rear speakers for users to enjoy movies or music while they aren’t playing.

Considering the high cost of gaming equipment, it makes sense to have some protection to cover you from accidental damage or breakdowns.

HP’s new Ultimate Gaming Coverage Plan gives gamers some peace of mind and protects their gaming equipment and accessories if they break. The plan covers most reputable gaming brands and offers up to $4,000 worth of coverage with a claim limit of $2,000. It only costs $19.99 per month, and there are no hidden costs, and customers can cancel their subscription at any time.