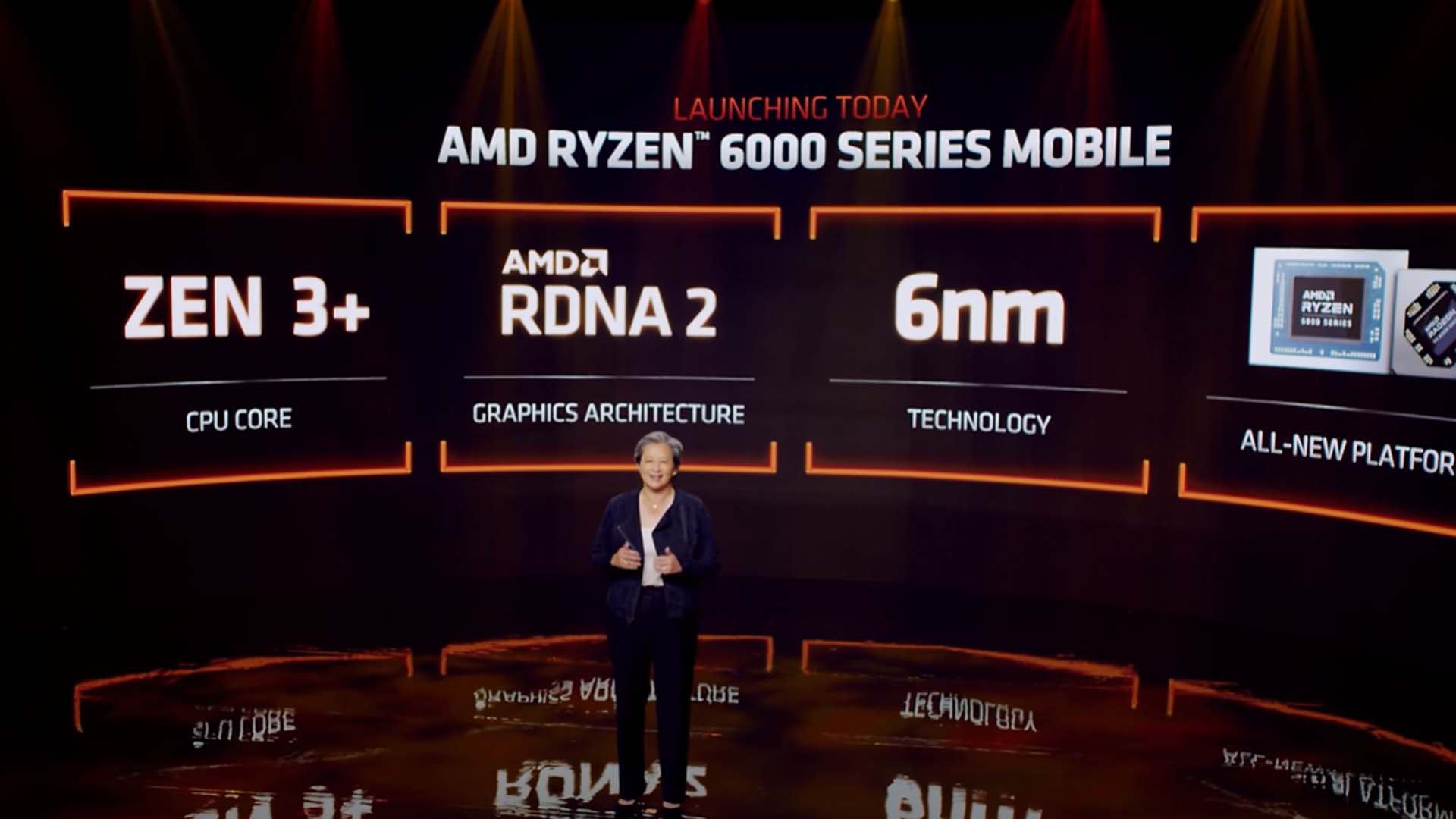 With the return of the Consumer Electronics Show for 2022, AMD announced a plethora of new products coming to both laptop and desktop PCs. All of what the manufacturer showed is scheduled to release at some point this year.

Here’s everything AMD announced at CES 2022.

Improving upon the 5000 series of APUs, the new AMD Ryzen 6000 mobile series offers an all-around increase in performance and efficiency. It’s the first AMD mobile processor to use RDNA 2 graphics.

6000M processors will also have up to eight cores and use Zen 3+ six-nanometer architecture—the latter will use both efficiency and performance cores in one. Altogether, the new chips seek to double the performance of the 5000 series with a 100-percent increase in 1080p gaming.

In addition to the 6000 series mobile processors, the new AMD Radeon RX 6000S series GPUs were unveiled. These graphics processors are made for ultra-thin and lightweight laptops while delivering similar performance to the M series. Laptops using this processor can be up to 20 percent thinner than previous models and weigh less than 4.5 pounds.

AMD is launching AMD Advantage laptops with partners like Alienware, Razer, Asus, and more with all of the new mobile processors. These laptops are unique because they’ll have exclusive smart technologies not found in other non-Advantage devices. The manufacturer also announced PRO CPUs for the 5000 and 6000 mobile series. PRO CPUs focus on productivity, offering enhanced security with Microsoft Pluton and longer battery life.

Several new AMD Adrenaline software updates focused on improving gaming efficiency and performance are coming in the first half of 2022.

AMD introduced Radeon Super Resolution, an in-driver software addition to Radeon graphics cards that can boost frame rates in the same way that Fidelity Super Resolution does. RSR accomplishes this by using the same algorithm as FSR. The difference is that the player can choose to implement it rather than the developer, so thousands of games can benefit from it.

Another new piece of software coming from AMD is Smart Shift Eco and Smart Shift Max. Smart Shift configures the system to switch between the Ryzen CPU and the Radeon GPU depending on specific parameters. For Smart Shift Eco, the system will automatically switch to the GPU when plugged in and only use the CPU when running on battery. On the other hand, Smart Shift Max boosts performance by giving more power to the GPU over the CPU and vice versa.

AMD Smart Access Graphics functions similarly to Smart Shift in that it works with both the CPU and GPU. The new feature, however, is for hybrid laptops with a CPU and a discrete GPU. Using it will automatically change between the processors to boost performance or save battery.

The red company unveiled a new mid-range graphics card in the AMD Radeon 6500XT. It will come with a 2.6GHz game clock—the fastest sustained GPU clock rate on the market, according to AMD. It will also have 16MB of Infinity Cache and 16 Compute Units and Ray Accelerators. Radeon 6500XT goes on sale on Jan. 19 for $200.

At CES 2020, AMD introduced its 3D V-Cache solution, essentially letting it develop chips with more cache stacked on top of each other. Now, the manufacturer is ready to put its first 3D V-Cache processor on the market with the AMD Ryzen 7 5800X3D.

The conference was rounded out by a glimpse at the Ryzen 7000 series processors that will use the new Zen 4 architecture. Zen 4 will be the first AMD chip built with five-nanometer semiconductors, allowing for even more computing density. AMD says that 7000 series processors will also feature the 3D V-Cache on specific chips.

With the Zen 4 architecture, AMD will be moving to the Socket AM5 platform. AM5 will use an LGA socket and be able to use PCIe Gen 5 DDR5.