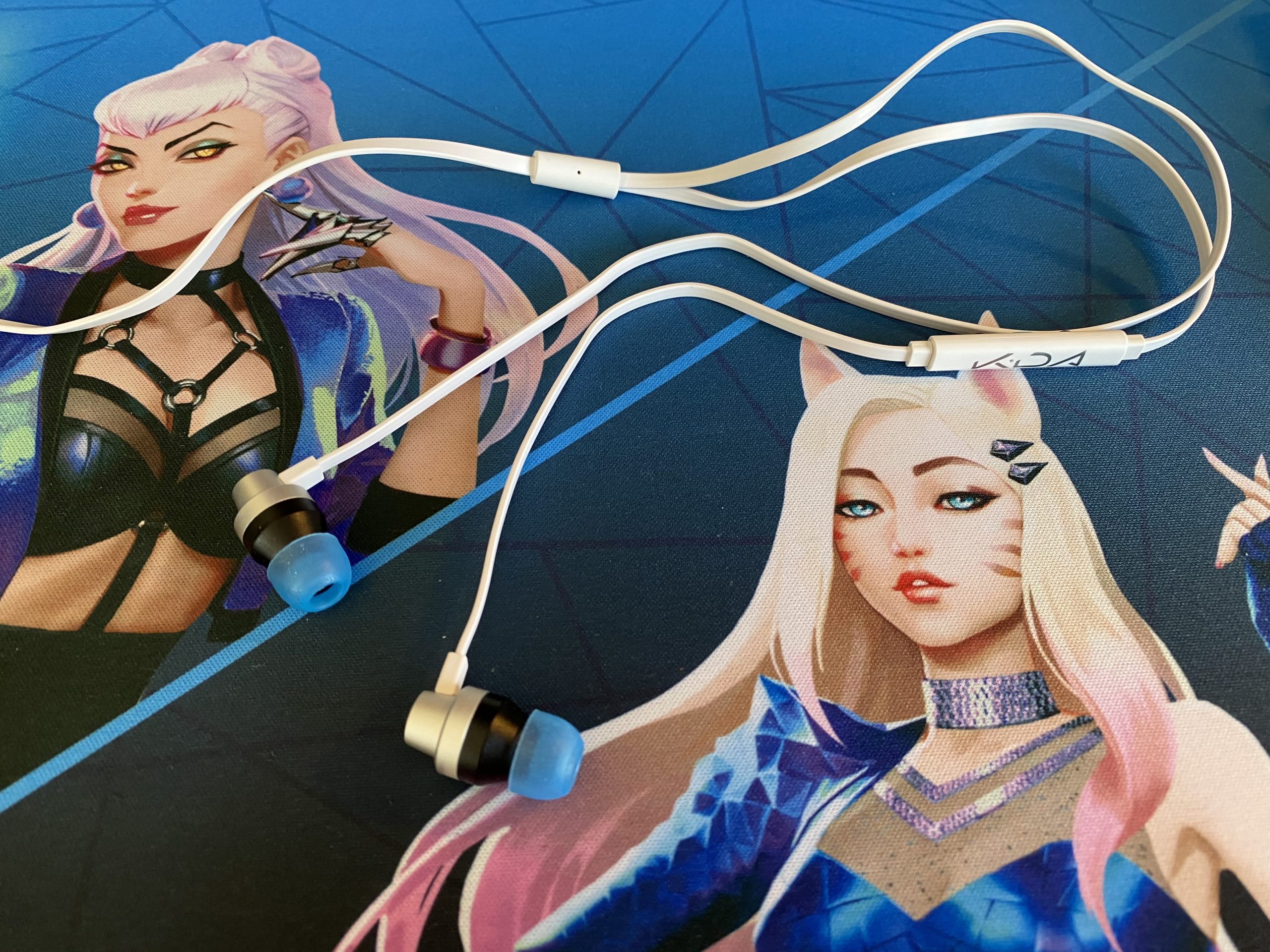 The design is based on Logitech’s Oculus-ready G333 VR earbuds, but this iteration is accessible to gamers across every platform. Logitech gave this product some quality-of-life improvements for its transition into a more versatile audio solution. The company didn’t phone it in with these earbuds and its first in-ear gaming audio solution packs quite a punch considering the small package.

Our reviewer was supplied with the K/DA edition of the G333, but these are available in several other colorways. Buyers can choose between black and blue, purple and green, and silver and light purple.

The aluminum housing makes these earbuds ideal for an everyday carry audio solution. Given the added durability of the aluminum, these should stand up to accidental drops and then some.

At a glance, there’s nothing to write home about in the aesthetics department. The G333s have the same standard-looking earbud design with brightly colored themes. Each colorway comes with three sizes of ear tips, a carrying case, a USB-C adapter, and a built-in microphone. But even with this feature set, they could easily come from any brand if the logos were hidden. Looks can be deceiving, though, and the G333s play coy out of the box.

The separation between the highs, mids, and lows varies depending on which title you’re playing, though. Rainbow Six Siege sounded surprisingly impressive, with footsteps coming in loudly, clearly, and above all, accurately. Our reviewer found it easy to track enemies and found that pre-firing based on the information provided by the G333s’ sound yielded some solid results. These won’t make your game better, but they’re a step up from traditional, non-gaming earbuds.

This level of success doesn’t translate to every title, however. Overwatch didn’t play well with the G333s for a couple of reasons. The main issue our reviewer ran into was the bass drowning out the highs and mids. Roadhog’s Scrap Gun and Pharah’s rocket launcher annihilated any chance of hearing anything other than their bassy impacts.

The G333s had good imaging in Siege, but in Overwatch, things seemed a bit looser and less reliable. There are obvious differences in each game’s sound design. But it was odd to feel like a McCree was within reach only to turn the corner and get slapped from a completely different direction than the G333s initially indicated.

Depending on how competitive of a player you are, these might not be the best option for Overwatch.

One major area of concern is the incessant hissing when using the 3.5-millimeter jack connection. This is most noticeable when in the menus. It’s likely that this issue won’t affect all users since the level of interference will vary from system to system. A DAC/AMP combo or other external audio interfaces may help remedy the hissing problem.

Logitech’s G333 earbuds excel in the versatility department. Users have a few nifty additions at their disposal. While they’re not groundbreaking features, their presence would have been sorely missed.

A USB-C adapter is included with the earbuds, allowing the G333s to connect to a variety of devices. This is helpful for the Android crowd as much as it is for Macbook Pro users. But the main appeal of the USB-C adapter is how it mitigates the previously mentioned hissing. While this likely isn’t the intent behind including the USB-C adapter, it worked wonders for our reviewer’s sanity while testing them out.

Another feature that improves the versatility of the G333s is the built-in microphone and inline controls. Other earbuds may have a microphone but few possess the quality of the G333s’ mic. It won’t replace a more premium microphone like an Audio-Technica AT2020, but the clarity and volume punch well above the G333s’ modest price point.

On a completely subjective note, our reviewer found the flat cable to be a bit annoying. It took forever to relax and held the same kinks over days of use. The flat shape didn’t help much in relaxing the kinks, making the flat cable design seem arbitrary.

The next sin is one pretty much all in-ear monitors are guilty of and that’s having too short a cable for desktop use. For those who game at a larger desk, you may find yourself hunching over or leaning to get closer to your PC. The cable just feels too short to lend itself to every setup. This issue only gets worse if you want to use a USB-C connection and don’t have one on your front panel. It won’t affect every user, but if you have a larger desk and sit farther away from your PC, consider grabbing a cable extension.

Logitech’s first outing into the world of in-ear gaming audio solutions is a successful one. The G333s may not work for every gamer, but they mostly achieve what they set out to do. There’s a lot of power thrown around by the dual-driver system to varying degrees of success. Some games sound great while others find themselves completely overtaken by the bass.

A great microphone and USB-C connectivity further the flexibility and portability of the G333s. These features help push the G333s into an easy recommendation when considering their overall price-to-performance value. There may be other non-gaming in-ear monitors that provide better imaging across more titles, but if you want to stick with a widely-trusted manufacturer, then these are the way to go.