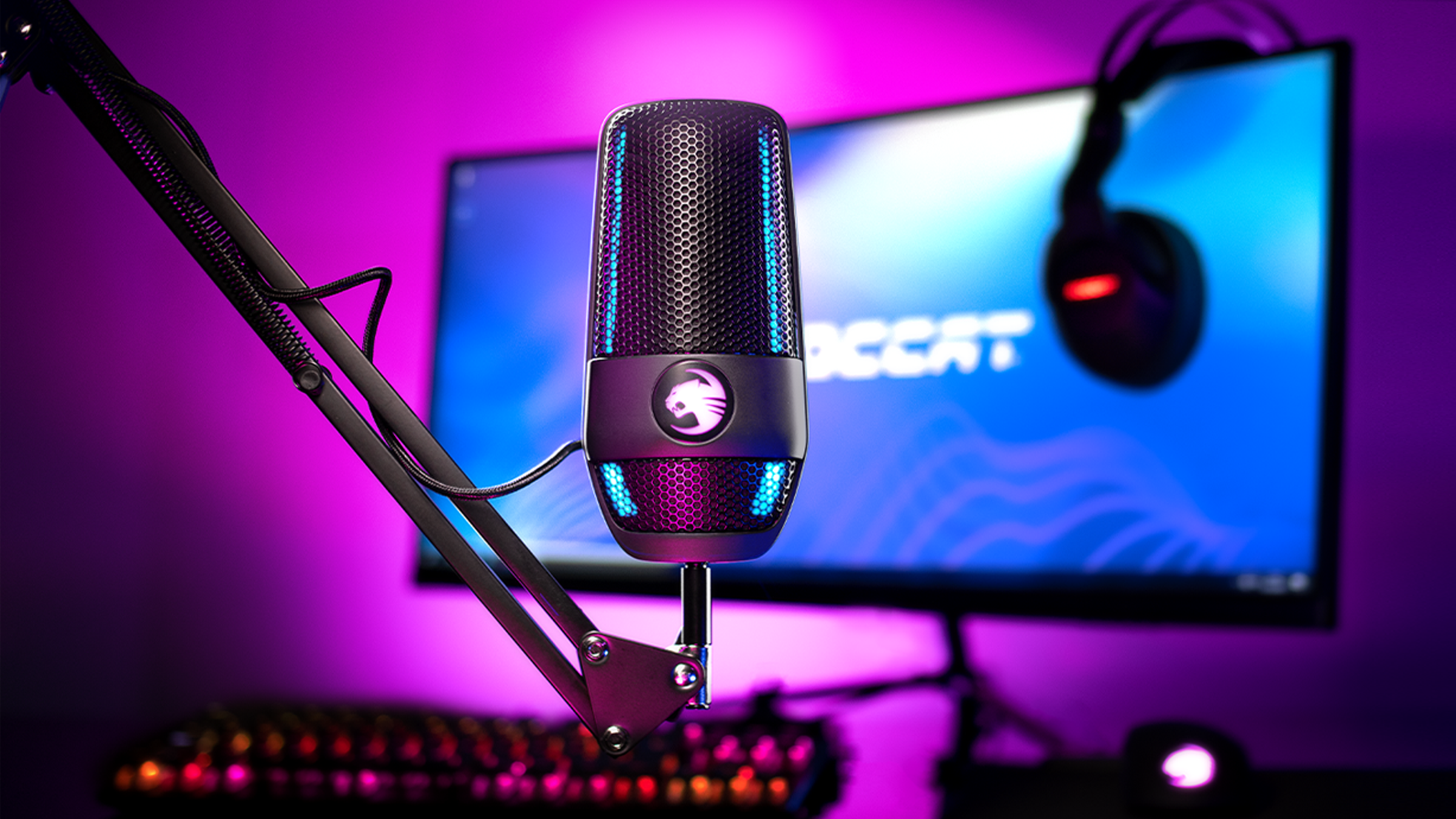 Roccat is a visually divisive brand. The company’s designs are often futuristic and fresh but don’t fit easily into many gaming setups. Looking at any one of Roccat’s products, they are immediately recognizable as gaming peripherals. Even with all of its bombastic designs, Roccat has outdone itself with its newest mic release.

Thanks to its oddly intense RGB-focused aesthetic, the Torch microphone leaves an immediate impression that can be tough to get over. Divisive looks aside, there’s no denying the value Roccat crammed into this reasonably priced mic.

Like most accessible gaming and streaming-oriented microphones, the Roccat Torch is a plug-and-play USB condenser mic, but it has much more up its sleeve.

Roccat includes a mixer-like base station to mount the mic. This station gives users more flexibility in how they manage their audio. Controls include a pickup pattern knob, volume knob, and gain slider. Having audio controls at your fingertips is always a plus, and the added control makes changing up settings on the fly a breeze, but the most important control is the pickup pattern knob. 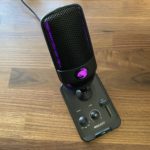 Users can switch between three pickup patterns: stereo, cardioid, and Whisper. Stereo is indicated by a pink glow and picks up audio from the left and right, while the cardioid pattern coats the mic in green light and only picks up audio from directly in front of the mic. Whisper is Roccat’s proprietary pattern that bumps the gain up so users can still be heard while whispering during late-night gaming sessions.

While it’s not the first microphone to provide users with multiple pickup patterns, it’s the most budget-friendly version. The mixer base station compounds that value by serving as a more versatile stand-in for a tripod mount.

Roccat’s approach to the Torch is unique in that it successfully pairs accessible controls with a decent mic. Many mics accomplish only one of these goals. For instance, mics like the EPOS B20 and HyperX QuadCast S have onboard gain, mute, and pattern controls, but they’re slightly clunky compared to the Torch’s mixer station. The convenience of the other two mics is undoubtedly there, but the Torch provides greater ease of access. 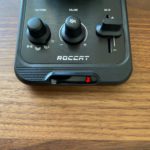 Pairing the ease of access with the 24-bit dual condenser capsule mic at $100 is a recipe for success. The closest mic that comes to mind is the 16-bit, tri-capsule Blue Yeti. While the Blue Yeti shares a similar price tag, impressive entry-level audio, and features, it stumbles similarly to the EPOS B20 and HyperX QuadCast S. Being able to adjust gain and volume with the base station while having the Torch on a boom arm makes it far more convenient to reach controls while gaming.

One inconvenient Torch control is the swipe-to-mute function. There are settings to control the proximity for the swipe functionality, but it usually feels awkward and unresponsive either way. There’s a slight delay between the swipe and the mic muting, which may cause issues here and there. Users may find themselves taking their eyes off their game to double-check if the Torch picked up the gesture. Tapping the top of the mic is the easy solution but will give your team or viewers a loud bonk.

Despite all of this versatility and convenience, some users may never need all three pickup patterns. Stereo might be useful for picking up multiple voices on a buddy stream, but cardioid will likely be where most users live. Using stereo introduces more background noise when you’re flying solo. Cardioid is more even and reliable, although both pickup patterns can sound tinny at times.

Roccat’s proprietary Whisper pattern is surprisingly useful. From the outside, this pattern looks relatively gimmicky, but it proves itself to be one of the more useful features on the mic. Having the gain cranked up picks up more background noise. But if you’re gaming late at night when everything is quiet, Whisper ensures voices come in as loud as they would while speaking full volume. It worked out well and proved to be more than a gimmick.

The Torch does an adequate job of providing clear audio but not without fault. Roccat’s Torch can be tinny regardless of the room. This trait won’t bother every user, especially considering the price, but it’s something to note for those with slightly higher-pitched voices. Even bassy voices sound a little echoey and metallic at times.

Looking at the Torch, it has an intense aesthetic. It shares a similar design language to the Vulcan series of keyboards but doesn’t translate quite as well. This mic will fit right in and complete the setup for users who already own a couple of Roccat peripherals. For those who don’t already own a piece of Roccat gear, the Torch might inadvertently become the focus of their setup.

One functional aspect of the Torch’s design is the RGB lighting running up the sides of the microphone. Adjusting the gain causes these lights to slide up and down. This feature functions well as a reminder of where the user has their gain. It’s not a groundbreaking feature, but it adds meaning to an otherwise flashy design element.

Roccat’s Torch microphone offers users a rare amount of value. There are plenty of features to justify the reasonable price tag. Where the microphone might fall short for some is in its occasional tinny quality. When held up against something like the HyperX SoloCast at $60 or the Blue Yeti at $99, there is a clear difference in mic quality. The tradeoff here is whether users need the versatility of the base station.

If you’re in the market for a microphone that covers a wide range of applications with multiple pickup patterns and a base station, you won’t find another option like the Roccat Torch. All of that utility comes at the cost of top-notch sound, though. For the price, there isn’t much reason to complain.