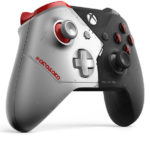 CD Projekt Red has teamed up with Microsoft to unveil a Cyberpunk 2077 themed Xbox controller—and it’s already up for sale.

The limited-edition controller comes in metallic silver, grimy black, and red with the words “no future” scribbled on it.

It’s scratched and beaten, straight out of the not-so-distance dystopian future. The front of the controller is printed with the Arsaka logo, one of the largest and most powerful corporations in the game’s universe known for its long history of blackmail, extortion, and bribery. The back has a Samurai Skull logo, which can be found on V’s—the game’s main protagonist—iconic bomber jacket.

The controller comes just a week after Microsoft announced a Cyberpunk 2077 Xbox One console that will be available to order in June 2020. The glow-in-the-dark console comes with the controller and a copy of the game.

But if you can’t wait for June and you’re desperate to get your hands on the controller now, it’s available for $74.99 on the Microsoft Store.

Cyberpunk 2077 was originally scheduled to release on April 16. But due to the COVID-19 pandemic, it was postponed until Sept. 17. “We are currently at a stage where the game is complete and playable, but there’s still work to be done,” CD Projekt Red said in January.

There’s no real advantage to owning the Cyberpunk 2077 controller. But if you’re a fan of the Witcher franchise and you want to support your favorite Polish video game developers, it’s a must-buy.