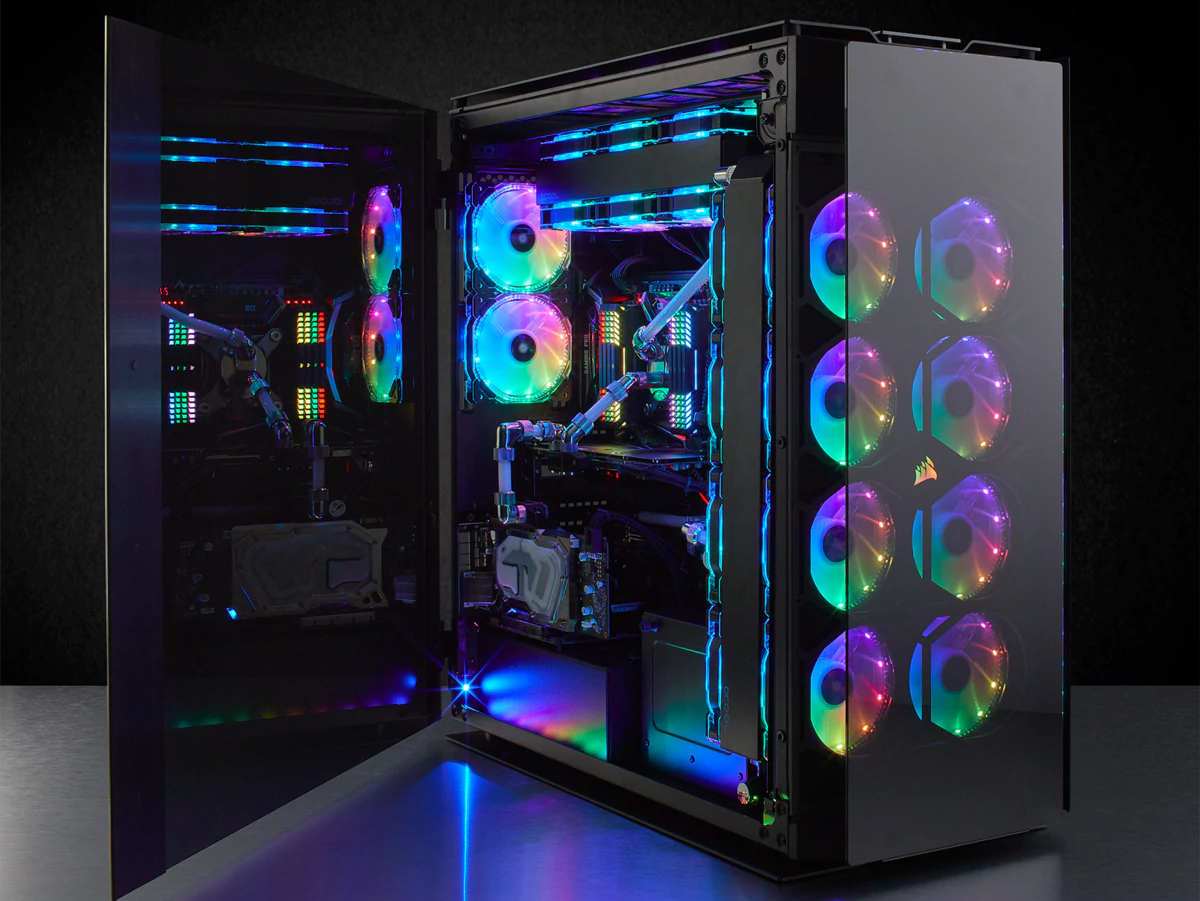 Tempered glass PC cases have eye-catching designs and are perfect for showing off the components of a build. These cases are available in all different shapes and sizes. Some cases only have a single glass panel, while others have tempered glass all around to show off your build from every angle.

Before investing in a tempered glass PC case, buyers should ensure all the components they plan to add will fit correctly. Some users prefer to leave extra space for future upgrades like liquid coolers. Heat can also be an issue, so you’ll need to make sure the case you choose has optimal airflow and room for additional fans.

Here are the best tempered glass PC cases to suit any build type.

The Cooler Master Cosmos C700M is a mammoth PC case that demands attention. It weighs 52 pounds without any components and measures a whopping 25.6 by 12.0 by 25.6 inches. The colossal size offers enough space for multiple mounting options and cooling features.

Both air and liquid cooling systems can easily fit in the Cosmos C700M. The case comes standard with three front-mounted 140-millimeter intake fans and a single 140-millimeter exhaust fan. In total, the Cosmos C700M can house up to nine fans, and the speeds are adjusted with a switch on the front of the case. Users who prefer liquid cooling can use the two radiator brackets to support a 420-millimeter radiator on the top, bottom, or side of the case.

Cooler Master’s Cosmos C700M has a futuristic look that makes it stand out as something special. The front panel features a brushed aluminum strip running from top to bottom that is flanked by RGB lighting on each side. Both sides feature curved tempered glass panels with hinges for easy access. There are also two aluminum handles on the top of the case, making it easier to carry its hefty weight.

Apart from its good looks, Cooler Master’s giant tempered glass case has great functionality. The Cosmos C700M allows multiple mounting options for the motherboard to be placed in a conventional setup or rotated 90 degrees, so the GPU is mounted vertically. There are also ample ports, including a USB-C, four USB-A 3.1s, and the audio jacks on the front panel.

One of the Cosmos C700M’s biggest strengths and biggest weakness is its immense size. The massive size of this case makes it impractical for users with limited space and adds to the price tag. On the flip side, the expansive space and flexible mounting options make it viable for more advanced builds.

Just like the Cosmos C700M, the Obsidian Series 1000D is massive with lots of interior space. It weighs 60 pounds and measures 27.3 by 12.1 by 27.4 inches. The interior can support up to five 3.5-inch drives and six 2.5-inch drives. There’s also space for 13 fans, including eight on the front panel, three on the top, and two at the back. Buyers can fit up to four 480-millimeter radiators simultaneously, but additional trays are required. The E-ATX motherboard fits onto the case’s wall in standard orientation, and the Mini-ITX motherboard fits horizontally on the bottom of the case.

The Obsidian Series 1000D shows off the internal components with tempered glass on three sides. A tempered glass front panel displays the intake fans. Both sides have massive hinged tempered glass panels to make the interior visible and easily accessible.

One of the standout features of this case is both systems have their own front I/O panel. The front of the Obsidian Series 1000D has separate power and reset buttons for each motherboard. Each system boasts its own USB-C and USB-A ports surrounded by RGB lighting. Corsair also includes Its Commander Pro controller to connect the fans and RGB lighting.

A dual-system case is overkill for most users. But for those who need a dual system, the Obsidian Series 1000D is one of the best options out there because of its abundant space and individual front panels.

Modern hardware can be noisy and distracting when gaming. Cooler Master remedies this issue with the Silencio S600. This case comes with additional vinyl and foam padding to dampen noise for a quieter gaming experience. There’s foam padding on the hinged front panel and the spare panel that can replace the dust filter on the top of the case. There are also soundproofing materials on the back panel.

Compared to the other cases mentioned so far, the Silencio S600 has a more compact size. It measures 8.23 by 18.82 by 18.52 inches and weighs 18.5 pounds. The case easily fits ATX motherboards, but it has limited mounting options for fans.  The Silencio S600 comes with a single 120-millimeter fan on the front and rear with space for another five. There’s also space for radiators on the top, front, and rear.

One of the great features of this case is the understated design. It is a simple black box with only the Cooler Master logo on the front. The left panel comes in either metal or tempered glass, and both options have a screw-on design. There’s a slight tint on the tempered glass panel, but it’s still easy to view the internals.

One of the more unconventional design elements is the placement of the I/O panel on the top of the case. The front I/O panel runs lengthwise instead of widthwise and only has two USB-A ports. A feature not found on any of the other cases on this list is the I/O panel’s built-in SD card reader.

The sound dampening does a brilliant job of keeping the noise down, but it comes at a price. Airflow is reduced, and the case can run hotter because of the extra material on the panels. It’s critical to have an adequate cooling system to combat the heat issue.

Not everyone needs a giant PC case. The Corsair Crystal 280X is a Micro-ATX case that takes up less space than any other cases mentioned on this list. Its small form factor only weighs 15.65 pounds and measures 15.67 by 10.87 by 13.82 inches.

For such a small case, the Corsair Crystal 280X maintains excellent airflow. One of the reasons for this case’s highly effective cooling is its dual-chamber design. The design keeps components like the hard drive and power supply on one side of the case, while the hotter GPU, motherboard, and processor fit on the other side of the case. There is also space between the front and top panels and the case to let air flow freely.

Corsair’s Crystal 280X stands out thanks to its unique look. It comes in either white or black, and the right chamber is completely enclosed. The left side of the case features tempered glass panels on the front, top, and side. There’s a single fan on the front of the case and one on the top as standard. Like on the Silencio S600, the I/O panel sits on the top of the case and isn’t front-facing. It features two USB-A ports and audio jacks. A drawback shared with the Silencio S600 is the lack of a USB-C port.

One of the main drawbacks of a compact case is the limited space but Corsair provides flexible mounting options to ease the move to a smaller case. The Crystal 280X comes standard with a single 120-millimeter fan on the front panel and one on the top. In total, the case can support up to six 120 or 140-millimeter fans or three 240-millimeter radiators. There’s also space for two 3.5-inch drives and three 2.5-inch drives.

The Thermaltake Core P90 has better airflow than any other cases on this list because of its open-air design.

Apart from the functionality of being an open-air case, the Core P90 stands out because of its distinctive shape. The centerpiece of the case is the triangular prism tower. Since the triangular prism is hollow, it houses the cable management and drive bays. All the components fit onto two sides of the tower, and the third side is for ventilation. Both the sides housing the components have five-millimeter thick tempered glass plates to cover the front of the internals, but the sides, top, and bottom are open. Overall, the Core P90 measures 18.5 by 18.5 by 24.2 inches and weighs 37.9 pounds.

Despite the unconventional shape, the Core P90 is quite versatile. It can work standing up vertically or sitting horizontally. It’s also possible to mount it on a wall using a VESA mount, but it might be a bit tricky due to the case’s weight and shape. Most parts, including the brackets and racks, have a modular design, so buyers can use the ones they need and leave out the rest.

Thermaltake’s Core P90 looks like something out of a sci-fi movie, but it comes with some drawbacks. The case is bulky, and it can be complicated to set up. Open-air cases are also prone to collecting dust, which may affect your hardware’s performance in the long run.