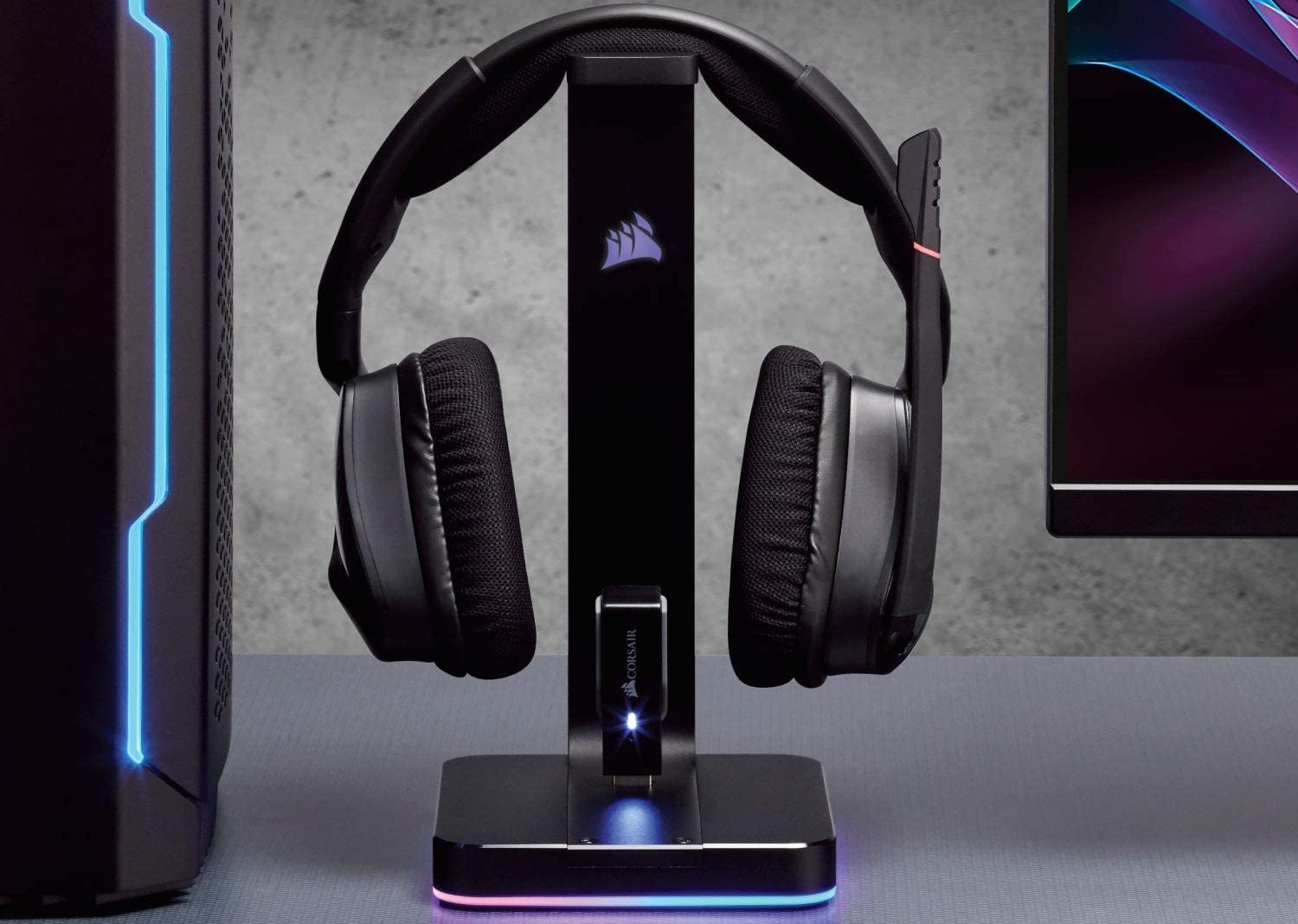 Headset stands are an often overlooked part of a gaming setup, and many users avoid them altogether. Modern headset stands protect expensive headsets from damage and have additional features to increase their functionality and practicality. Many of the best headset stands have built-in USB hubs for users to plug in their keyboards, mice, and other devices. Some headset stands even have built-in audio ports and digital to analog converters (DACs) so users can plug in their headset directly and enjoy virtual surround sound.

These are the best RGB headset stands.

The Asus ROG Throne Qi is a practical solution for storing headsets, and it also has other useful features. Its base features a built-in wireless charger, so users can charge their phones while they play without having to look for cables or free USB ports.

Apart from wireless charging, the ROG Throne Qi is packed with features to create a more comfortable gaming experience. It has a built-in digital to analog (DAC) and a 3.5-millimeter jack so users can plug in their headsets and configure the virtual surround sound and equalizer settings through the Armory Crate app. There are also two USB-A 3.1 ports for users to plug in their mice, keyboards, and storage devices directly into the headset stand.

Like all ROG products, the ROG Throne Qi boasts impressive build quality. It has an all-black plastic construction with a large base and rubber feet to hold it in place. At 7.48 inches long, the neck is tall enough to fit most headsets, and the V-shaped hanger holds them in place. The transparent plastic piece running up the stand steals the show. This design element has a diagonal cutout with a ROG logo illuminated by the RGB lighting.

Extensive RGB lighting adds flair to the ROG Throne Qi. The lighting runs along the base and up the stand. There are 18 individual zones with multiple presets, like Static, Breathing, and Rainbow. Lighting is configured with the Asus Aura app and syncs with keyboards, monitors, and other devices.

Despite all the handy features, the ROG Throne Qi still has a couple of flaws. The base doesn’t have a USB-C port, which is becoming more common on modern headsets. Although the headset stand can be powered via USB only, it requires a power adapter for the wireless charging to work.

Users who are bored with all-black devices and want to add some color to their setup can check out Razer’s Base Station V2 Chroma. It comes in three colors, including black, Mercury, and Quartz. Black is self-explanatory, Quartz is pink, and Mercury is silver.

Many features on the Base Station V2 Chroma mimic the ROG Throne Qi. There’s a built-in DAC with a 3.5-millimeter port so users can plug their headset directly into the stand. Like the ROG Throne Qi, there are two USB-A 3.1 ports and no USB-C port. An area where the two headsets differ is the lack of wireless charging on the Base Station V2 Chroma.

Razer took a different approach to construction compared to Asus. Instead of using plastic, the company gave the Base Station V2 Chroma a durable aluminum construction. The neck is a single piece of aluminum with a flat top, and it’s much taller than the ROG Throne Qi at 10.94 inches tall.

The Base Station V2 Chroma has discreet RGB lighting, which may be more appealing to some users. There are only eight lighting zones on the base’s rim with nothing on the neck. Like other Razer products, users configure the Base Station 2’s lighting presets with the Chroma app.

Corsair’s ST100 is a sturdy headset stand with excellent build quality. The entire unit is constructed from aircraft-grade aluminum, so it should have a long lifespan. Compared to the aluminum Base Station V2 Chroma, the ST100 has a thicker neck, and the hanger has indents to keep the headset securely in place.

Just like the other headset stands mentioned so far, the ST100 has built-in USB ports and a 3.5-millimeter jack. There are two USB 3.1 ports, but they aren’t placed together like on the Base Station V2 Chroma and the ROG Throne Qi. Instead, there’s one port on the top of the base and another on the right side. Another feature shared with the other headset stands on this list is the built-in DAC. Users can plug their headsets directly into the stand to experience virtual 7.1 surround sound.

Another prominent feature is the RGB lighting. The ST100’s lighting runs along the base and illuminates the Corsair logo on the neck. There are nine lighting zones with presets controlled through the iCUE app.

Although the ST100 has similar features to the Base Station V2 Chroma and the ROG Throne Qi, its build quality helps it stand out. On the flip side, it suffers from the same drawbacks as the others, like its price and lack of a USB-C port.

Cougar’s Bunker S RGB is an innovative headset stand with multiple mounting options. Its standard configuration is a conventional headset stand with a neck and hanger connected to a base. The Bunker S RGB shines thanks to its ability to mount horizontally on a PC case or wall to save space. If users want to attach the stand to their PC case, they must remove the longer neck and swap it out with the shorter one provided in the box. After swapping necks, users can mount the headset stand to their PC using a suction cup mechanism.

Thanks to its unique design, this headset stand looks different from others on this list. It still has an all-black finish, but the circular base is much thicker to accommodate the suction cup mechanism. All of the parts, including the base and both necks, are constructed from plastic but have a durable feel. The taller neck has a U-shaped hanger to secure the headset in place. There’s a semi-circular piece of plastic on the end of the shorter neck to stop the headset from falling off.

The Cougar Bunker S RGB may have more mounting options, but it has fewer features than the other headset stands on this list. It only has two USB 2.0 ports, and there’s no 3.5-millimeter jack or DAC. Although the RGB lighting on the base is vivid, it’s controlled by a button on the device and is limited to 14 lighting effects.

This headset is a great choice for users looking to save space by hanging their headsets onto their PC. It may lack the functionality of its rivals on this list, but at around half the price, it’s hard to complain.

Budget-conscious users looking for an affordable headset stand with a futuristic design can check out the Tilted Nation TNShadow. Despite its reasonable price, the TNShadow still includes a mouse bungee and eye-catching RGB lighting. Users can also choose between the black and white color options.

Compared to the other headset stands on this list, the TNShadow has a different design language. Its oval-shaped neck is 9.96 inches tall, with a five-inch gap in the middle. There’s no separate hanger, and the headset sits on the neck itself. Instead of a flat base like the alternatives, the TNShadow has a star-shaped base with two USB 3.0 ports sitting between the legs.

One of the main reasons to get the TNShadow is the RGB lighting. Lighting strips run along both sides of the neck, with smaller strips on each leg. There’s another LED under the base that lights up the desk. Like the Bunker S RGB, there’s no software to configure the lighting, and a button on the base controls the seven color presets.

The TNShadow lacks some advanced features offered by rivals like the ST100 and ROG Throne Qi. However, the TNShadow makes up for its shortcomings with a built-in mouse bungee and a low price.