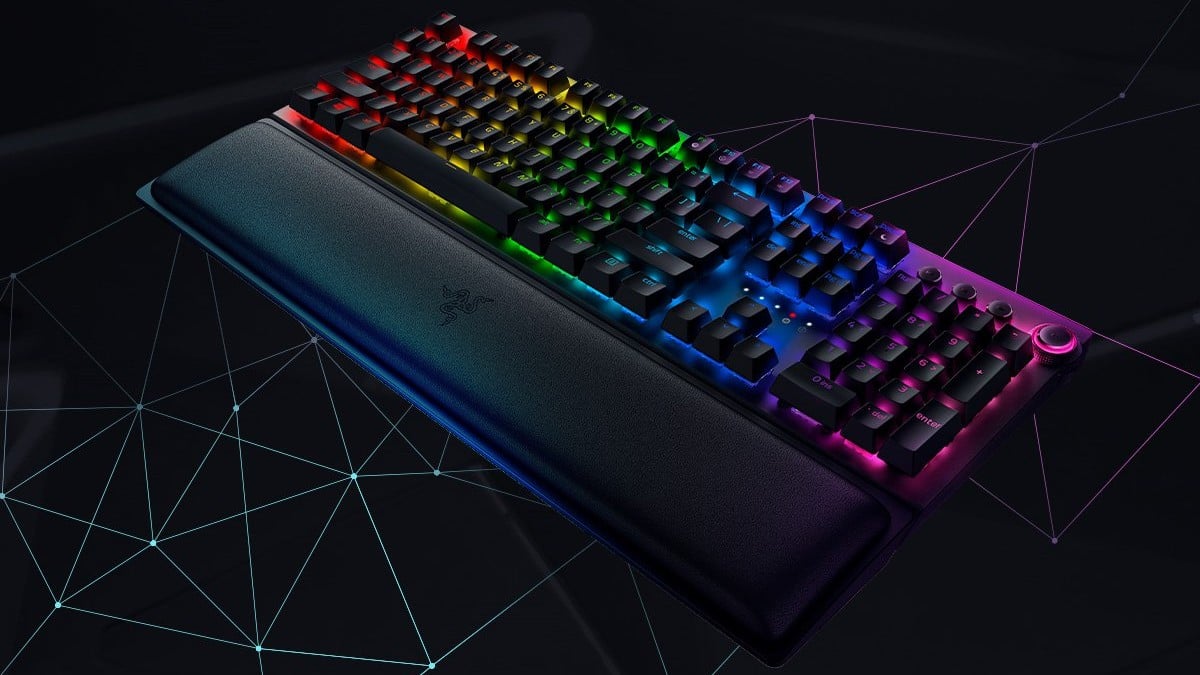 Razer is constantly pushing boundaries, and some of its recent products have broken barriers when it comes to ingenuity. The Viper 8KHz has the fastest polling rate of any mouse, and the Razer Blade 15 Advanced is the first laptop with a 360Hz refresh rate.

The company’s keyboards may not be groundbreaking like some of its other products, but it’s always trying different approaches to give gamers the most fully-featured keyboards possible. Razer keyboards have an excellent reputation for delivering quality, performance, and wide feature sets. Many of them have a durable aluminum top plate or frame and feature the company’s proprietary switches.

These are the best keyboards in the Razer lineup.

The analog input feature is the true gamechanger on this keyboard. All the keys are pressure-sensitive so that they can work like analog sticks or triggers on a controller. Analog input also gives you the option to use dual-step actuation. This means you can set each button to have one function if it’s pressed lightly and another function if it’s pressed all the way.

Apart from analog input, all the keys have customizable actuation points. It’s possible to adjust the actuation point of each key between 1.5 and 3.6 millimeters. This function is handy if you use your keyboard for office work and gaming because you can set different profiles with high or low actuation points depending on what you’re doing.

All the features of the Huntsman V2 Analog are premium quality. The top plate is made from sturdy aluminum, and the keycaps are double-shot PBT. Double-shot PBT keycaps are more durable than ABS keycaps because of their dual-layer construction and resistance to shine over time.

Convenience features like a comfortable wrist rest and media keys are the icing on the cake. The Huntsman V2 Analog has a soft-touch magnetic wrist rest that has RGB lighting running along the edges. The media keys, including the multifunction dial, add more flexibility to the keyboard.

Everything, including the RGB, actuation settings, and profiles, is configured with Razer’s Synapse app.

There’s no doubt that the Huntsman V2 Analog is a premium keyboard with outstanding customization options, but there are some downsides. Some of the innovative features like dual-step actuation and analog functionality may be overkill for some users. The asking price might also put-off some buyers, but that’s to be expected with a fully-featured keyboard.

Users who don’t like wires getting in the way of their gaming will find the Razer BlackWidow V3 Pro to be a better option. It has versatile connectivity options, including a 2.4Ghz wireless connection, Bluetooth, and a USB cable. The Bluetooth connects directly to Bluetooth-compatible PCs, and the wireless link uses a dongle that can be stored in the keyboard when it’s not in use.

Tenkeyless keyboards remove the number pad to have a smaller form factor. They are often preferred over full-size keyboards because they take up less space but retain their gaming functionality. The Razer BlackWidow TE Chroma V2 TKL takes some of the BlackWidow V3 Pro’s features and repackages them in a compact size.

Many compact keyboards sacrifice some functionality for a small form factor. Considering its size, the BlackWidow TE Chroma V2 TKL is a capable keyboard with minimal tradeoffs.

The Razer Huntsman Mini has an even smaller form factor than the BlackWidow TE Chroma V2 TKL because it cuts out the direction and navigation keys. Most 60-percent keyboards are stripped down to only 61 keys instead of the standard 104 keys to allow increased mobility and portability. The size is beneficial to players needing more desk space, but it’s not the best for office use.

To make up for the small form factor, the Huntsman Mini has secondary functions printed on the side of the keycaps. The shortcut keys are clearly marked and easily accessed using the function key.

A few features carry over from the Huntsman V2 Analog. The Huntsman Mini has an aluminum top plate and PBT double-shot keycaps. It’s also good to see a detachable USB-C cable that can be removed for easy transport since portability is half the draw with a 60-percent keyboard. Like all other Razer keyboards, the Synapse app controls the lighting and configuration options.

The Huntsman Mini is the best option for users looking for a light and compact keyboard.

Some users aren’t worried about mechanical keys and just want a quality keyboard without breaking the bank. That’s where the Razer Cynosa V2 comes in. It’s a full-size keyboard that costs way less than any of the other keyboards on this list.

Razer sacrificed a few features to keep the price of this keyboard down. The Cynosa V2 uses membrane keys and ABS keycaps. Instead of having an aluminum frame and braided cable, it makes do with plastic and rubber alternatives. There’s also no wrist rest included, but alternatives are available separately.

Despite the cost-cutting measures, the Cynosa V2 has decent functionality. It has per-key RGB lighting and dedicated media keys. Razer advertises the Cynosa V2 as being spill-resistant, but there’s no specified rating, so it’s not advisable to put it to the test.

Considering the budget price, the Cynosa V2 is a great entry-point into the world of Razer keyboards. Just don’t expect too many premium features.