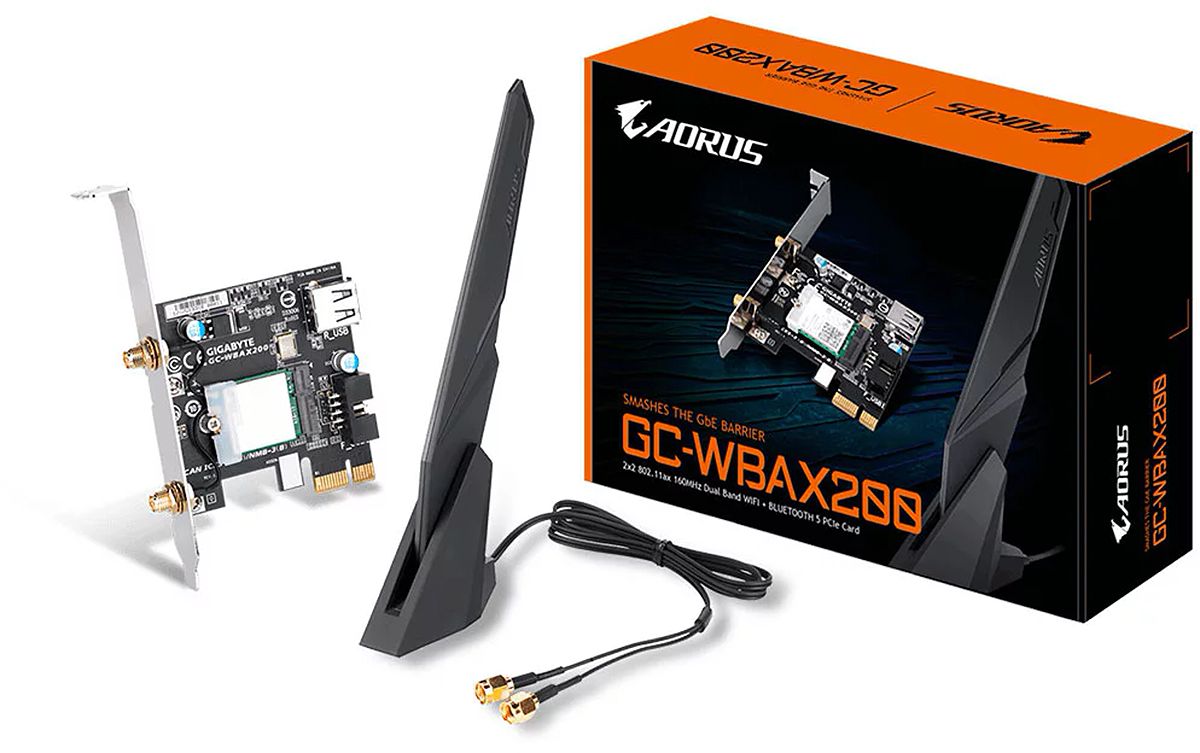 Most modern desktops come with built-in Wi-Fi to connect to your network. If you don’t have built-in Wi-Fi, you can easily install a PCIe card to upgrade your system.

PCIe Wi-Fi cards are easy to install and can update your system to the fastest speeds and improve your network coverage. PCIe cards are also an easy fix if your onboard card isn’t working. You can also install one of these cards if you have an older PC and want to upgrade its Wi-Fi capability.

The newest Wi-Fi standard is version 6. Wi-Fi 6 has a top speed of around 9.6 Gbps compared to the 3.5 Gbps of Wi-Fi 5. It can also connect with more devices simultaneously and has better security with the new WPA3 protocol. If you’re using an older Wi-Fi 5 router, you can still use recent Wi-Fi 6 cards because they are backward compatible.

Wi-Fi 5 PCIe cards are still available, but Wi-Fi 6 cards are around the same price and have better performance. You should also note that to get the best out of your Wi-Fi card, you need a router that can match its performance. You should also ensure that the card is compatible with your operating system before purchasing because some only work with specific versions of Windows.

Here is a list of the best PCIe Wi-Fi cards for great network coverage and speed.

The Asus Pce-AX58BT is a Wi-Fi 6 card with all the latest features. It operates on either 2.4Ghz or 5Ghz frequencies and has super-fast Wi-Fi speeds of up to 3 Gbps. It also uses the latest technologies like orthogonal frequency division multiple access (OFDMA) and multi-user, multiple input, multiple output (MU-MIMO) for a more stable connection.

OFDMA allows multiple users on a network to get data packets simultaneously to increase speed and efficiency. In the past, it was a first-come-first-serve basis and some users would experience slower speeds because they were competing with others. MU-MIMO works in a similar way, but instead of transporting low-bandwith signals, it works with hig-bandwith traffic like streaming. Another great feature of this card is Bluetooth 5.0, which allows you to connect your smartphone or speakers to your PC easily.

This PCIe card uses a single slot, so it should fit on most motherboards. It has a compact shape, but the heatsink might be bulky for some builds. You also get a second mounting bracket to fit small form factor cases and two dual-band antennas. The antenna can connect directly to the card or the supplied magnetic antenna base. The Asus Pce-AX58BT is pricey and only works with 64-bit operating systems. Otherwise, it’s one of the best Wi-Fi 6 cards you can get.

The TP-Link WiFi 6 TX3000E is a more slightly more affordable option that still has excellent performance. It has Wi-Fi 6 speeds of up to 2.4 Gbps on the 5Ghz band and around 574 Mbps on the 2.4 GHz band. It’s also compatible with older standards, and you can get around 1.7 Gbps on Wi-Fi 5 and about 300 Mbps on Wi-Fi 4. Just like the Asus Pce-AX58BT, it also has Bluetooth 5.0 connectivity to connect other devices.

This PCIe card also has OFDMA and MU-MIMO technology for better connectivity across a busy network. It also supports the latest WPA3 encryption for improved security. Installation is as simple as fitting it in the slot and updating to the latest drivers. If you want to use the Bluetooth feature, there’s one extra header cable to connect. There are also two antennas that either connect to the card itself or the magnetic base.

The GC-WBAX200 is part of Gigabyte’s top-of-the-range Aorus line. This PCIe card is almost half the price of the PCE-AX58BT but has fast enough speeds to play games like Call of Duty without lag. It’s capable of speeds of up to 2.4 Gbps if paired with a Wi-Fi 6 router, and it also works well with older routers. Just like the other cards we’ve mentioned, it has MU-MIMO capability. The Bluetooth 5.1 includes better direction finding and detection of devices, leading to better speeds and lower power consumption.

This Wi-Fi card has no heatsink, so it’s more compact and ideal for cases with space limitations. Instead of the usual mini-antennas, it has a massive smart antenna with a magnetic base and adjustable tilt. There’s no WPA3 compatibility, so you’ll have to use the older WPA2 encryption protocols.

The D-Link AX3000 is a brilliant choice if you want to upgrade an older PC to get better network speeds. It delivers speeds of up to 2.4 Gbps on the 5Ghz band and 600 Mbps on the 2.4Ghz band for a combined rate of up to 3 Gbps. It also features the latest Bluetooth 5.1 to connect your controller or wireless mouse and keyboard.

You can connect this PCIe card to most motherboards, and it also comes with a bracket to connect it to smaller gaming cases. The latest WPA3 compatibility is included, but it’s also compatible with the security on older routers. Like the other cards we’ve mentioned, it has a dual-antenna system with a magnetic base.

The Edup PCIe EP-9636GS is one of the best options if you want to upgrade to Wi-Fi 6 on a limited budget. It costs less than the other Wi-Fi cards on this list, but it keeps up with their performance. It has a maximum combined speed of 3 Gbps with up to 600 Mbps on the 2.4Ghz band and 2.4 Gbps on the 5.8Ghz band.

The Edup Wi-Fi card comes with Bluetooth 5.0 instead of 5.1, but it’s not bad for this price point. Another cost-cutting measure is not having an antenna base. Instead, both antennae fit directly onto the card. This PCIe Wi-Fi card offers exceptional value compared to all the other cards on this list, but it only works with Windows 10 64-bit.

The MSI Dual Band AX 200 is a dual-band Wi-Fi 6 card with top speed of 2.4Gbps that’s slower than some of the 3.0 Gbps cards on this list. Depsite the slower speed, it’s good enough for most games and other uses like streaming. It also has MU-MIMO technology to optimize network traffic and Bluetooth to connect your devices and transfer files.

This PCIe card doesn’t have a heatsink, so it can fit in tighter spaces. The downside is that you have to make sure your case has adequate cooling. One of the great features of this card is the huge antenna base. It looks like a futuristic grappling hook with a three-spike design and should improve your network connectivity.

The Fenvi PCIe Wi-Fi Adapter provides fast speeds at a reasonable price. It’s a dual-band Wi-Fi 6 compatible card with speeds of 1.3 Gbps on the 5Ghz band and 450 Mbps on the 2.4Ghz band for a total of 2.4 Gbps. It’s slower than the Asus and TP-Link cards we’ve mentioned, but it’s on par with the MSI AX200. You don’t have to worry about data congestion when there’s heavy network traffic, thanks to the OFDMA and MU-MIMO compatibility.

This Wi-Fi card has Bluetooth 5.0, which is expected at such a low price. It’s good enough for most everyday uses like transferring files or connecting to devices. It has a chunky look because of the huge heatsink. Buyers should make sure they have enough space in their rigs before purchasing. The antenna has a unique flat shape that folds into an L-shape when in use.