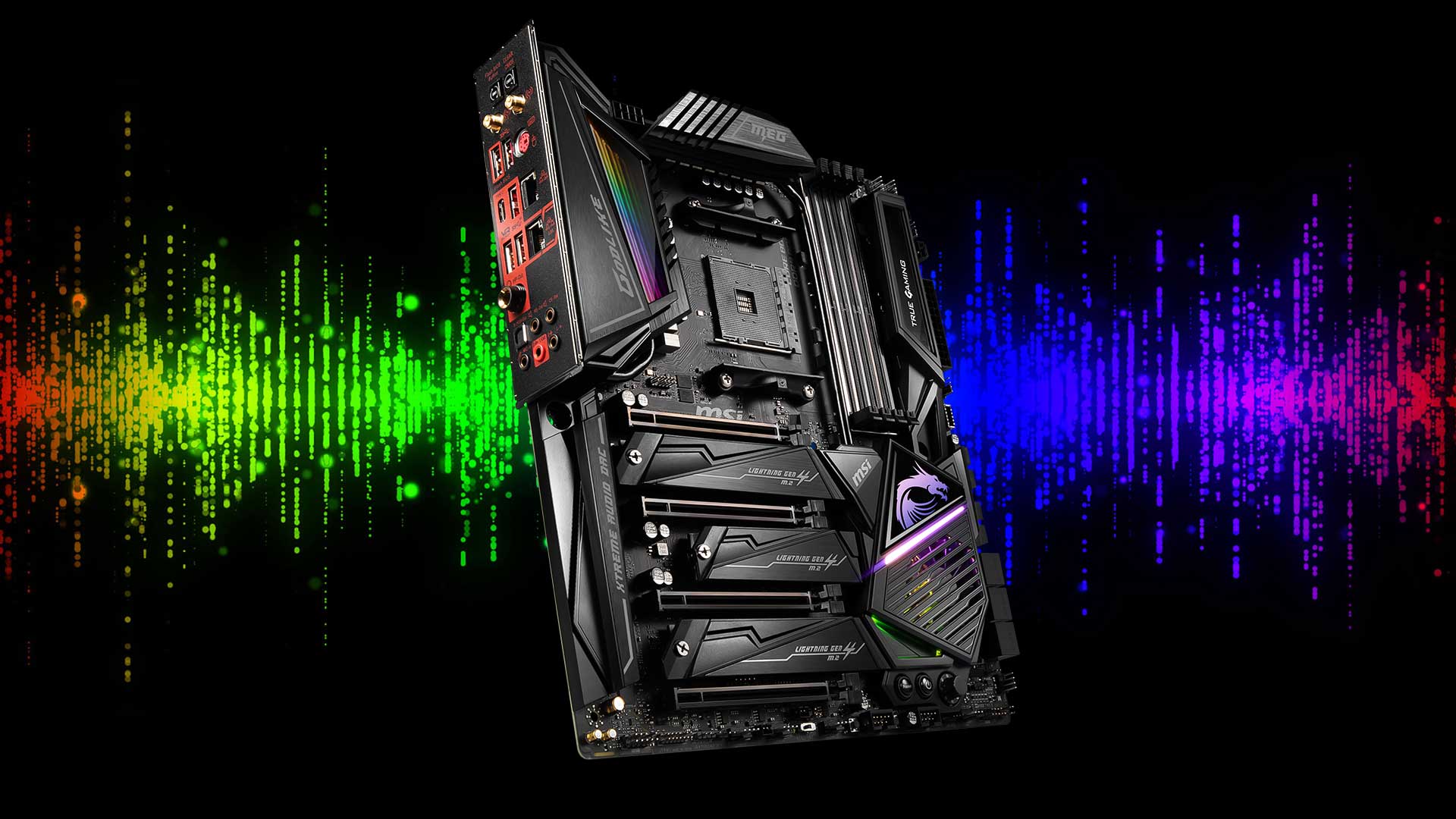 The B550 has fewer PCIe lanes available on the CPU, which translates to having fewer PCIe slots. Most B550 motherboards have a mixture of PCIe 3.0 and 4.0 slots, but all the slots on the B570 support PCIe 4.0.

PCIe 4.0 offers double the bandwidth of the older PCIe 3.0, but the difference is only noticeable if you have an NVMe SSD or graphics card capable of matching the speeds. Most hardware is compatible with both standards, so you can use older components on PCIe 4.0 slots and newer parts on 3.0 slots.

The Gigabyte TRX40 AORUS Xtreme motherboard has an impressive four PCIe 4.0 M.2 connectors with thermal guards, so you’ll never run out of space for NVMe SSDs. There’s also another four PCIe 4.0 slots for graphics cards or other components. You can add up to eight 32GB RAM chips for a maximum of 256GB of memory. This motherboard has built-in Wi-Fi, but the star of the show is the 10Gbe LAN adapter for a blazing fast connection.

Other features include addressable RGB lighting, an AMP 1220-VB audio codec, and a front USB-C port. This motherboard has a width of 10.8-inches, so you’ll need to ensure it can fit in your case. The Gigabyte TRX40 Aorus Xtreme is very pricey, but you won’t need to upgrade it anytime soon.

The MEG X570 Godlike is MSI’s flagship motherboard with 19 power phases, making it perfect for overclocking. You also get four PCIe 4.0 slots for add-on cards and three PCIe 4.0 M.2 slots. It’s disappointing that there are only four RAM slots with a maximum capacity of 128GB at such a high price. It should be more than enough for the average gamer, but rivals like the Gigabyte TRX40 and ROG Zenith II have moved up to 256GB.

This motherboard comes with dedicated audio codecs for the front and rear with an eight-channel ESS Sabre digital to analog converter (DAC) 6.3-millimeter jack. If you ever run out of M.2 slots, you can use the provided expander card to add two more. You can also upgrade the 2.5 Gbps plus networking capability using the 10 Gbe LAN card or use the built-in Wi-Fi 6 instead.

The RGB lighting is everywhere, including the mirrored infinity display and the dragon logo. It looks amazing, and you can use the Mystic Light application to sync it with other devices like your mice, keyboard, or headset. Another fun addition is the monochrome OLED screen that can display animations or system information.

The Asus ROG Zenith II Extreme is another high-end X570 motherboard with 16 power phases. It costs less than the MSI MEG and TRX40 but can match or exceed many of their features. It also has a whopping eight memory slots that can handle up to 256 GB of DDR4 RAM. There are also five PCIe 4.0 M2 slots and four regular PCIe 4.0 slots. One of the M.2 slots is located on the back of the motherboard, so you can only access it if it’s not attached to the case.

Like the MEG X570 Godlike, there’s an OLED screen, but on this motherboard, it’s 1.77-inches and has a color display. You can use it to display useful information like CPU temperature and voltage. It can also be used for diagnostics when troubleshooting the motherboard. It’s not surprising that this motherboard comes with a built-in Wi-Fi 6 adapter, and there are also two Ethernet ports and Bluetooth 5.0.

Like many modern motherboards, it also has a USB BIOS FlashBack function that can repair corruptions with the firmware. As with most ROG products, there’s abundant RGB lighting throughout and a massive logo.

The Gigabyte X570 AORUS Master comes in at around half the price of the other motherboards with only a 14-phase VRM. It comes with four DDR4 RAM slots with a maximum capacity of 128GB. There are also three PCIe 4.0 M.2 slots and three regular PCIe slots. The only downside to this configuration is that two of the six SATA ports are disabled when the third M.2 slot is in use.

There’s built-in Wi-fi 6 and two ethernet ports, including one with 2.5 GbE capability. Sound is taken care of by an ALC1220 codec and an ESS Sabre 9118 DAC. There are also front and rear USB-C ports, along with the obligatory RGB lighting.

The steel plate attached to the back might add some reinforcement, but it makes this motherboard quite hefty at 3.3 pounds. The Gigabyte X570 AORUS Master offers outstanding value and is worth looking at if you don’t want to spend top dollar on a motherboard.

The Asus AM4 TUF Gaming X570 is a more budget-friendly alternative to the other motherboards we’ve mentioned. It only has a 12+2 phase VRM, and like other TUF products, it uses military-grade components. It matches the Gigabyte X570 AORUS Master and MSI MEG X570 Godlike by having a 128GB RAM capacity.

There’s also two full-length PCIe 4.0 slots for your graphics card and two smaller x1 slots for Wi-Fi adapters. Compared to the other motherboards on this list, the AM4 TUF Gaming X570 only has two PCIe 4.0 M.2 slots, but they should be plenty for most users.

Asus had to cut out certain features to keep the price down, and it shows. There’s no built-in Wi-Fi, and RGB lighting is kept to a minimum. There’s also no front USB-C port. None of these factors are dealbreakers when you consider the affordable price.