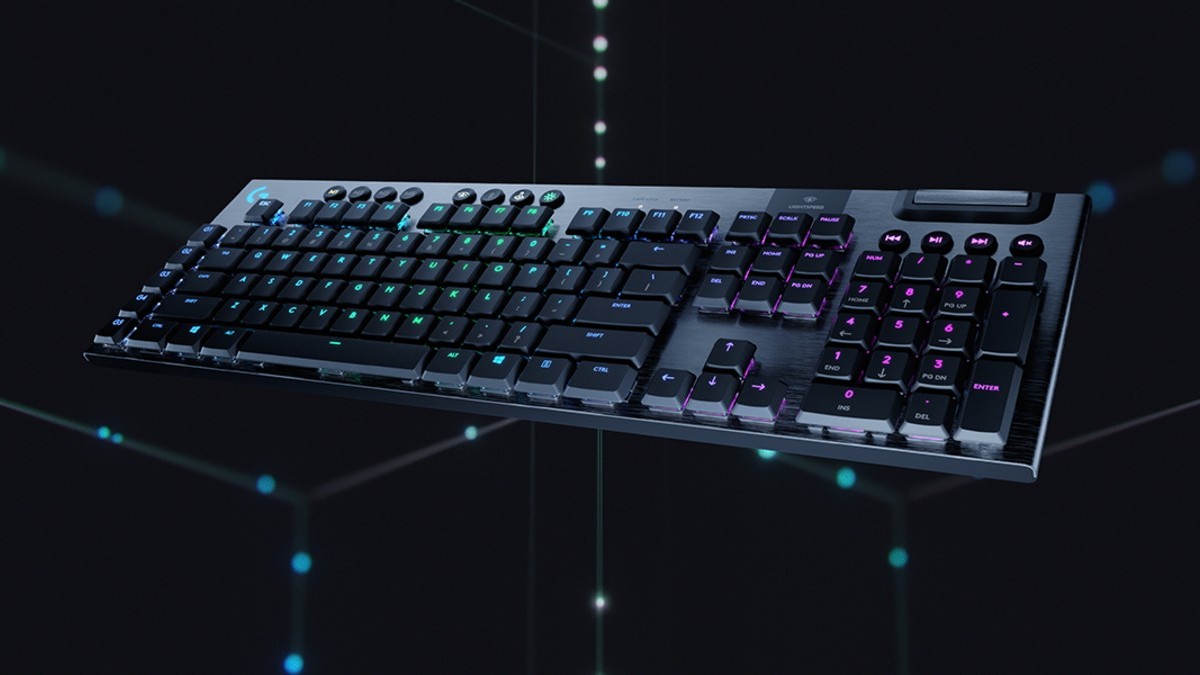 Image by Logitech via Amazon

Logitech is one of the most renowned players in the peripheral industry. The company is known for its high-quality products ranging from keyboards to headsets, mice, and more.

Within the Logitech range, the G sub-brand is dedicated to making some of the best gaming equipment on the market. These products include the G Pro mouse, the Pro X headset, and the Embody gaming chair made in conjunction with Herman Miller.

Logitech G’s keyboard range consists of many wired and wireless options to suit users’ budgets and requirements. All the keyboards in the range feature the company’s sturdy build quality, and some go the extra mile with aluminum or steel construction. Most keyboards in the Logitech G range are packed with gamer-friendy features like fast response times, mechanical keys, and RGB lighting. Logitech also gives buyers a choice between full-size or compact keyboards to suit their needs.

Logitech G’s Pro is a tenkeyless (TKL) keyboard targeted towards esports athletes. Its minimalist design focuses on gaming functionality above all else and cuts out unnecessary features like the number pad and a wrist rest. Even the keys are kept to a minimum, and there are no extra macro or media keys. Instead, users can extend the keyboard’s capabilities by programming the 12 function keys through Logitech’s G Hub app.

For such a small keyboard, the G Pro is built tough. The top case is black plastic, and the plate is made from steel. Thanks to the steel plate, there’s little to no flex, and the keyboard has a solid feel to it. Another feature that adds to the durability is the detachable micro-USB cable. There’s a lower chance of the braided USB cable being damaged if disconnected when the keyboard is transported. Even if the cable gets damaged, it’s easier to replace than with another cable.

Some users might not like the limited switch options available on the Pro. Many keyboards on this list offer three different types of switches, but the Pro keyboard only comes with GX Blue switches. These switches emulate Cherry MX Blue switches’ clicky feel and have a two-millimeter actuation point with 3.7-millimeters of travel distance.

Like most Logitech keyboards, many functions are configured using the G Hub app. G Hub is easy to use and lets users configure per-key RGB lighting, create profiles, and program the function keys.

Logitech G’s Pro keyboard is quite expensive and only comes with a single switch option. Despite its high price and lack of flexibility, the Pro is the best Logitech G keyboard for gaming thanks to its small form, reliable switches, and sturdy build.

Users looking for full-size functionality and wireless connectivity can check out the Logitech G915. Compared to the Pro, the G915 has all the buttons generally found on a full-size keyboard, including the number pad. It goes a step further by including dedicated media keys, an aluminum scroll wheel, and five programmable macro buttons on the left side. There are also buttons to switch between various profiles, adjust the backlighting, and switch between a wireless and Bluetooth connection.

Logitech pulled out all the stops making the G915, and build quality is first-rate. The whole keyboard has a slim design with low profile keys and a solid aluminum top plate. Instead of the standard GX switches found on the Pro and Pro X, users can choose between Logitech’s low-profile GL Blue, Red, and Brown switches, which have a similar feel to their taller siblings.

A main selling point of the G915 is its wireless connectivity options. It connects to a PC with either a Bluetooth connection or wirelessly with Logitech’s Lightspeed technology. The Bluetooth connection uses less power and doesn’t need a dongle, but the response time isn’t great for competitive gaming. Logitech’s Lightspeed wireless technology switches between frequencies to deliver a consistent one-millisecond response time for gaming, but it requires a dongle.

Users don’t have to charge the G915 often, thanks to its long battery life. The G915 has an estimated 30-hour battery life with all the lighting options turned on, and it’s even longer with power-saving features active. When the battery eventually loses power, it charges up in three hours with the provided micro-USB cable.

Like all the keyboards on this list,  many of the G915’s functions are controlled through G Hub. Users can create up to three macro profiles and two lighting profiles that store on the G915’s onboard memory. The app also configures the per-key RGB lighting and syncs with other Logitech devices.

Logitech’s G915 has an extensive feature set, but it doesn’t come cheap. It’s the most expensive keyboard in the Logitech lineup and might be out of reach for some buyers.

Some users prefer a comfortable wrist rest for hours of gaming. Logitech’s G513 shares many features with the G Pro and G915, but it comes with a massive detachable wrist rest.  The wrist rest has a layer of foam padding covered in leatherette, and it’s resistant to sweat and water.  Wrist rests provide support and can prevent strain and fatigue during long gaming sessions.

Apart from the wrist rest, the G513 has a capable feature set. Like on the G915, users can pick between the low profile GL Brown, Blue, and Red mechanical switches. The construction also mimics the G915 with a slim design and aluminum top plate. A helpful feature on the G513 is the USB 2.0 passthrough that lets you connect other devices like a mouse directly to the keyboard.

A unique feature of the G513 is the inclusion of spare keycaps. Logitech includes a set of grooved QWERASD and number keys, along with a keycap puller. These additional keycaps offer better grip for some users because of their grooved shape. The additional key’s shape makes gaming more comfortable for beginners learning finger placement.

Logitech kept the keys to a minimum on the G513. Compared to Logitech’s G915, the G513 sticks to a more conventional layout with no additional macro or media keys. Buyers still have access to per-key RGB lighting and programmable profiles accessed through the G Hub app.

The G513 is an attractive choice for buyers because of its all-around comfort and capability. It’s comfortable for hours of play thanks to the included wrist rest and slim design. Its full-size layout also makes it ideal for gaming and office use.

The Logitech Pro X is designed for gamers who like to tinker with their keyboards. It comes with Logitech’s swappable mechanical switches, which are easy to replace using the provided tool. There are three types of compatible switches: the GX Brown tactile switches, GX Blue clicky switches, and GX Red linear switches.

Another great feature of the Logitech Pro X is its compact design. The TKL design eliminates the number pad to make the keyboard more compact and lightweight. On this particular keyboard, having fewer keys means fewer switches to swap, so the job becomes easier and faster. Like the Pro, the Pro X features a detachable micro-USB cable making it easy to transport to tournaments.

The Logitech G Pro X doesn’t come cheap and extra switches further increase the price. It’s only worth it for users who will use the hot-swapping feature. If you aren’t interested in trying out different keys, the regular Logitech G Pro might be a better option.

Logitech G’s G213 Prodigy is a great option for buyers looking for a capable keyboard at an affordable price.

Despite its low price, the G213 keyboard has more keys than the G513. Apart from the standard keys, there are dedicated media keys, including a volume rocker and keys to turn on the lighting. These keys add more functionality to the keyboard and are more efficient than using a mouse to navigate media players or volume controls.

Instead of mechanical keys like the other previously mentioned keyboards, the G213 uses membrane keys. Logitech engineered the membrane keys to have a tactile response like mechanical keys, and they have a four-millimeter travel distance that requires 50 grams of force to actuate. An added benefit of membrane keys is the resistance to spills. This keyboard may be spill-resistant, but it’s not advisable to put it to the test.

Logitech sacrificed a few features to keep the G213’s price reasonable. Unlike the other keyboards on this list, the G213 uses an all-plastic design. Instead of per-key lighting, the G213 only has ten lighting zones. Another cost-cutting measure on the G213 is the integrated wrist rest with a hard plastic surface instead of padding.

None of the cut corners are deal-breakers, and the G213 has enough features to satisfy gamers on a budget. Logitech’s G213 is a better option for gaming than most standard keyboards because of its tactile membrane keys, spill resistance, and RGB lighting.