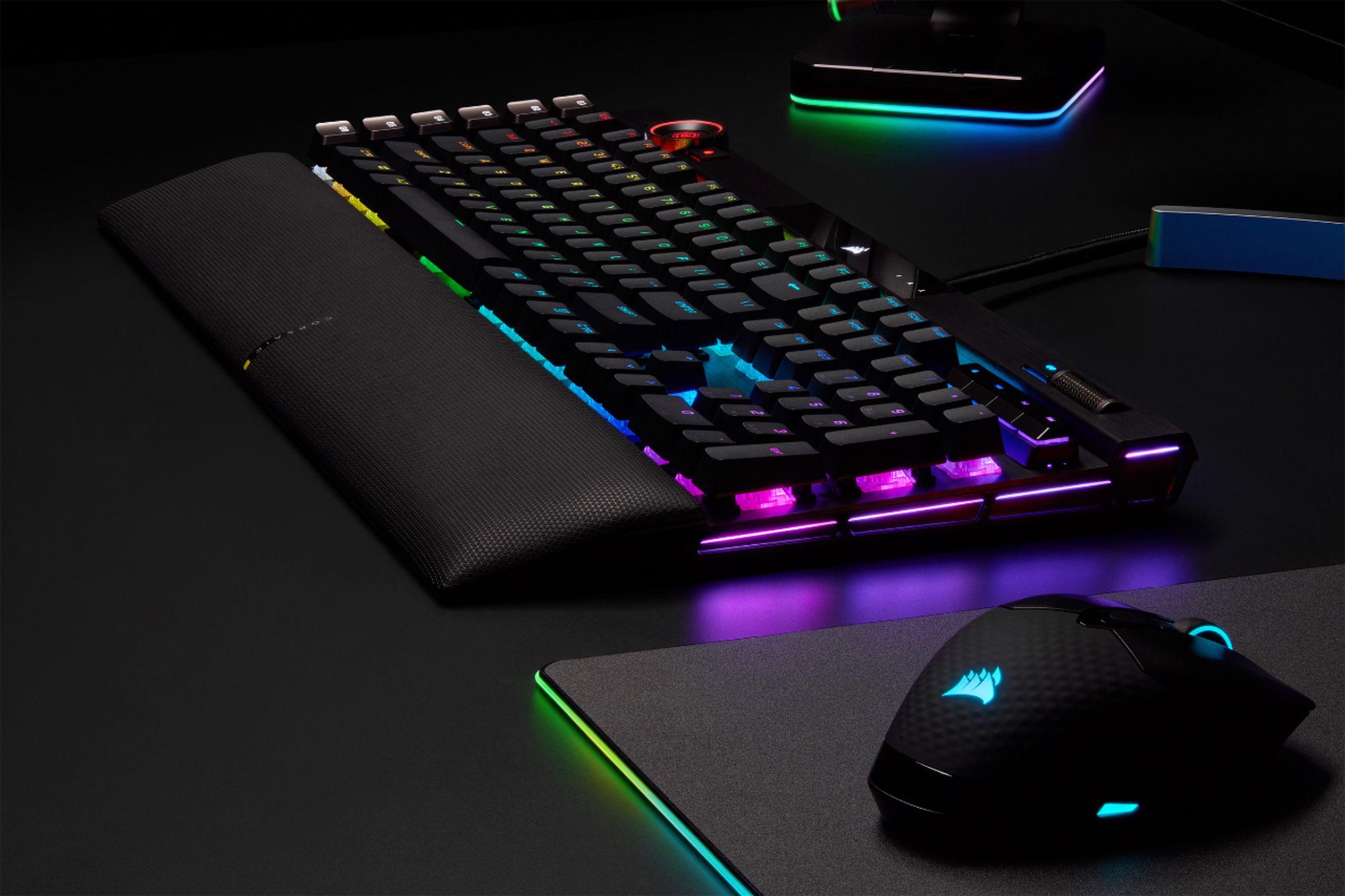 For most Xbox One users, a controller is their go-to device when it comes to gaming. However, some gamers find it hard to perform intricate actions using the limited number of buttons on a traditional controller. To help with this discomfort, the Xbox One is compatible with mouse and keyboard, gamers have the option to leave the controller behind. However, Xbox One does not support Bluetooth devices.

Because mouse and keyboard pre-packaged content bundles aren’t always the best value, this list looks at a wide range of brands and hardware to find the best combinations. Below are the best keyboards and mice for the Xbox One.

Best high-end keyboard and mouse for Xbox One

The Corsair K100 RGB Mechanical Keyboard is not only flashy with its RGB backlighting, but it’s also fast with its impressive 0.5-second response rate. It gets its fast response time from Axon Hyper-Processing Technology and linear switches. However, users can buy the keyboard with either Corsair OPX switches or traditional Cherry MX Speed switches.

Gamers who regularly utilize macros on PC will also be satisfied with the Corsair K100’s macro-control software and six dedicated keys. These keys make the K100 an easy go-between for PC and Xbox One users. However, these macros will not work with the Xbox One.

The Logitech G Pro X Superlight is a mouse designed with professional gaming in mind. It’s one of the lightest mice on the market at 63 grams and features Logitech’s HERO 25K sensor. Because it’s light and accurate at high speeds, the Pro X Superlight is ideal for first-person shooters and other fast-paced games. In addition, this mouse uses a 2.4GHz Lightspeed wireless connection and has an impressive 70-hour battery life.

Best mid-range keyboard and mouse for Xbox One

Gamers who often switch devices will be pleased with the Razer Huntsman Mini’s onboard memory that stores up to five profiles that are swappable with a press of a button. This makes switching from any device to the Xbox One seamless by storing the user’s configurations directly on the keyboard.

The Razer Viper Mini is a 61-gram mouse made for those who utilize the claw or fingertip grip. Because of the mouse’s infrared light beam that replaces physical actuation, the Razer Viper Mini achieves a response time of 0.2 milliseconds and also works to eliminate debounce delay. This response time reduces the latency of the mouse and makes for a faster gaming experience.

Best budget keyboard and mouse for Xbox One

The Stoga Gaming Keyboard is a reasonably priced 60-percent mechanical keyboard that is available in white or black and features customizable RGBs. However, the Stoga isn’t wireless and instead connects to the Xbox One using a USB Type-C cable, which isn’t ideal for users who sit farther away from their consoles or TVs.

Although the Stoga Gaming Keyboard only has 68 keys, there is still a way to access the commands found on full-size keyboards. For example, users can hold down the FN key to access over 100 secondary commands. Additionally, like many other gaming keyboards, the STOGA 60-percent Gaming Keyboard has full n-key rollover. Having full n-key rollover means the board will register all keypresses no matter the number of inputs.

The Glorious Model O is a honeycomb mouse that weighs 58 grams and comes in either a matte or glossy coating. Along with making the mouse lighter, the honeycomb cutouts keep palms cool during use. The honeycomb design is further complemented by RGBs that act as a DPI indicator that adjusts to any color using the PC Gaming Race software.

Additionally, the Glorious Model O features .81 millimeter thick mouse feet that allow the mouse to glide comfortably across almost any surface. It also comes with a flexible paracord cable that’s suited for couch gaming, but users will need to sit closer to their console or TV to make this mouse work for Xbox One.

Best wireless keyboard and mouse for Xbox One

The Logitech G502 Lightspeed is a wireless gaming mouse with adjustable weights and a HERO 25K sensor. The HERO 25K sensor is capable of 400 IPS tracking speed and a maximum DPI of 25,600. Its tracking speed ensures the mouse stays accurate when moved quickly, making the Logitech G502 Lightspeed a reliable choice for games that require fast-paced mouse movements and precision. Additionally, the HERO 25K sensor provides better power efficiency, allowing the mouse to run wirelessly for 60 hours before needing a charge.

Best RGB keyboard and mouse for Xbox One

The Corsair K95 RGB Platinum XT is a mechanical keyboard that gamers can purchase in three key types: Cherry MX Blue, Cherry MX Brown, and Cherry MX Speed. The Cherry MX Blue keys provide a loud, clicky experience, while the MX Speed switches focus on speed with their low actuation point. A lower actuation point means the keys don’t need to be pressed down as far to register a keypress, making them faster by a fraction of a millisecond or so in most cases.

Corsair’s Nightsword RGB is a fully customizable mouse that gamers can tailor to their needs. What makes it so customizable is its adjustable weight system. Users can swap in weights to get their preferred balance to fine-tune the mouse’s movement. It also has rubber grips that provide improved comfort and grip. In addition, it’s rated for up to 18,000 DPI and has a tracking speed of 400 IPS.