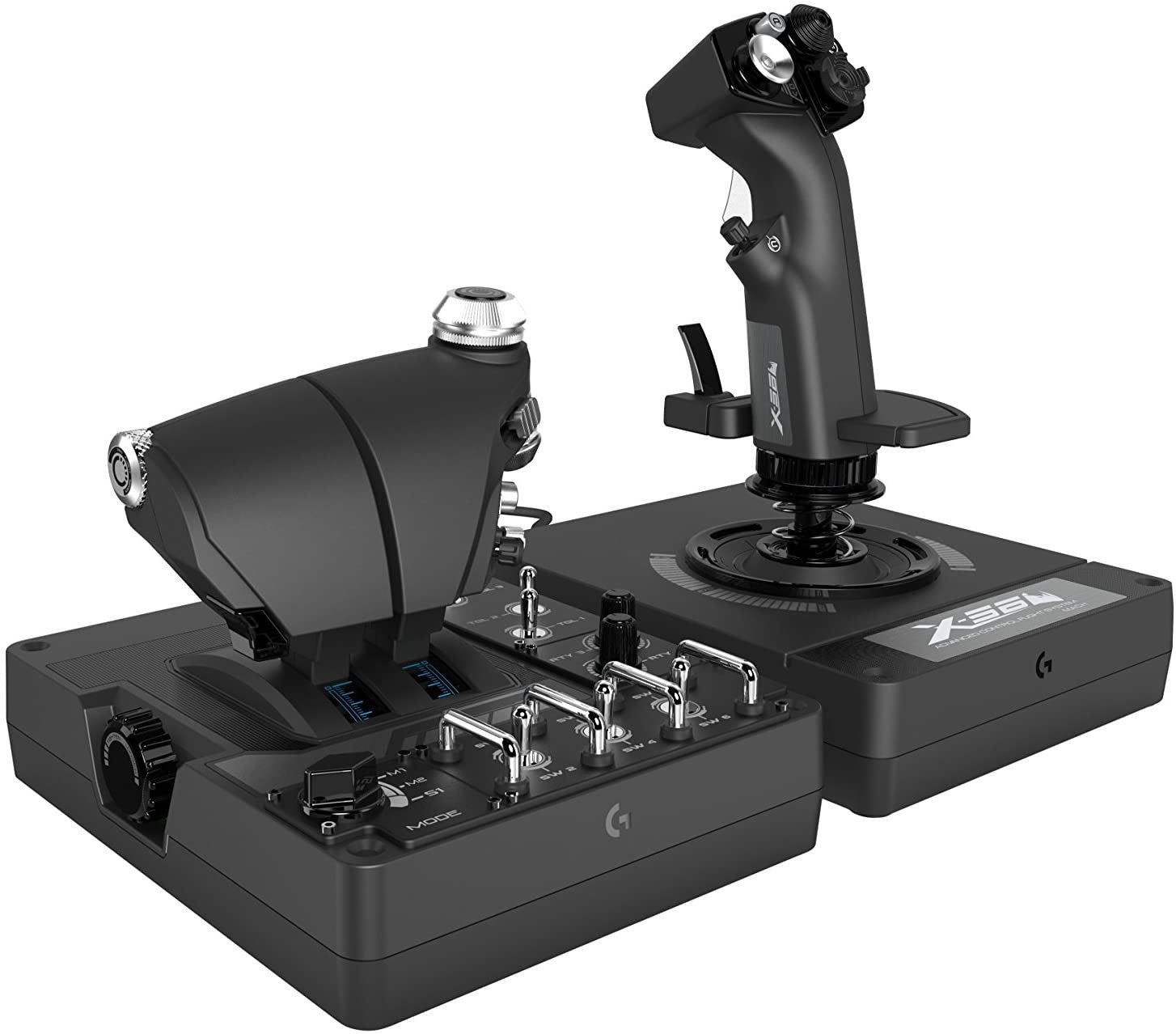 Image by Logitech via Amazon

Most people use a mouse and keyboard or controllers for gaming, but joysticks have their place too. Games like Microsoft Flight Simulator and Ace Combat are way more immersive if you use a joystick because it mimics an airplane’s real controls.

Many joysticks are designed exclusively for flight simulators and come in the Hotas format. HOTAS stands for hands-on throttle and stick, and this type of joystick often comes with the throttle controller to accompany the main joystick.

Here are some of the best joysticks for gaming to see what they offer.

The Thrustmaster HOTAS Warthog is widely regarded as the best joystick for flight simulators because of its high-quality construction and incredible attention to detail. It has an added feeling of authenticity because it mimics the U.S. Air Force’s A10C Warthog setup.

The HOTAS Warthog is constructed from metal and has a solid feel that you won’t get from many rivals. The stick itself is comfortable to hold and has a two-stage trigger and a pinkie trigger. There’s also an eight-way hat switch and three four-way hat switches. It comes attached to a metal plate with holes for mounting on a simulator cockpit.

The dual throttles are just as solid as the joystick and have five programmable LEDs, fifteen action buttons, and a TRIM wheel. The toggle switches have a sturdy feel but don’t work well with certain games. The Thrustmaster Hotas Warthog is on another level compared to most joysticks, but so is the price.

The Logitech G X56 is the closest rival to the Thrustmaster Warthog and also has impressive performance. It’s not metal, but the plastic feels smooth and is comfortable to hold. All the switches are intuitively placed and have a fantastic response when pressed. Both the throttle and joystick have analog mini-sticks programmed for advanced game functions like controlling machine guns or thrusters.

Between the two components, 186 keys can be easily configured using the software. One of the best features is the interchangeable springs. You can choose between four different springs for the joystick to mimic the feel of large or small aircraft. Another feature not found on other joysticks is the RGB lighting surrounding the buttons and on the joystick. It looks impressive and makes the Logitech G X56 stand out.

The Logitech Extreme 3D Pro is an affordable flight simulator joystick. It doesn’t come with separate throttle control, but all the buttons are located on the joystick and base. This joystick is easy to grip and has a twist-handle for rudder control. It houses a single eight-way hat switch surrounded by four silver buttons, and there’s also a massive trigger.

The enormous base has rubberized feet to keep it in place. It has six programmable buttons and a tiny throttle control lever. One of the best things about this joystick is that it’s plug and play for Windows. Despite being plug and play, users can still use the included software to customize controls to their liking. The Logitech Extreme 3D Pro is known for its durability and is perfect for beginners.

Advanced players might prefer the Thrustmaster TCA Sidestick Airbus Edition because they can add the optional throttle controls and flying clamp for a more immersive experience. It’s a great entry point into the Thrustmaster ecosystem, and you can always add the throttle and rudder control later. This joystick has a plastic construction with no contouring, but it still feels comfortable to hold. It has the usual trigger, and the top has an eight-way hat switch flanked by two swappable switches.  The base has six programmable switches with a built-in throttle lever.

You can twist the joystick for rudder control and easily disable the function if you decide to buy the pedal controls later. Like the Logitech Extreme 3D Pro, it’s completely plug and play. However, you can still use the T.A.R.G.E.T software to create different profiles for the various aircraft you’ll be flying.

Update Feb. 9, 2021 11:52am CT: This list previously included irrelevant products. It has since been updated to include only joysticks.