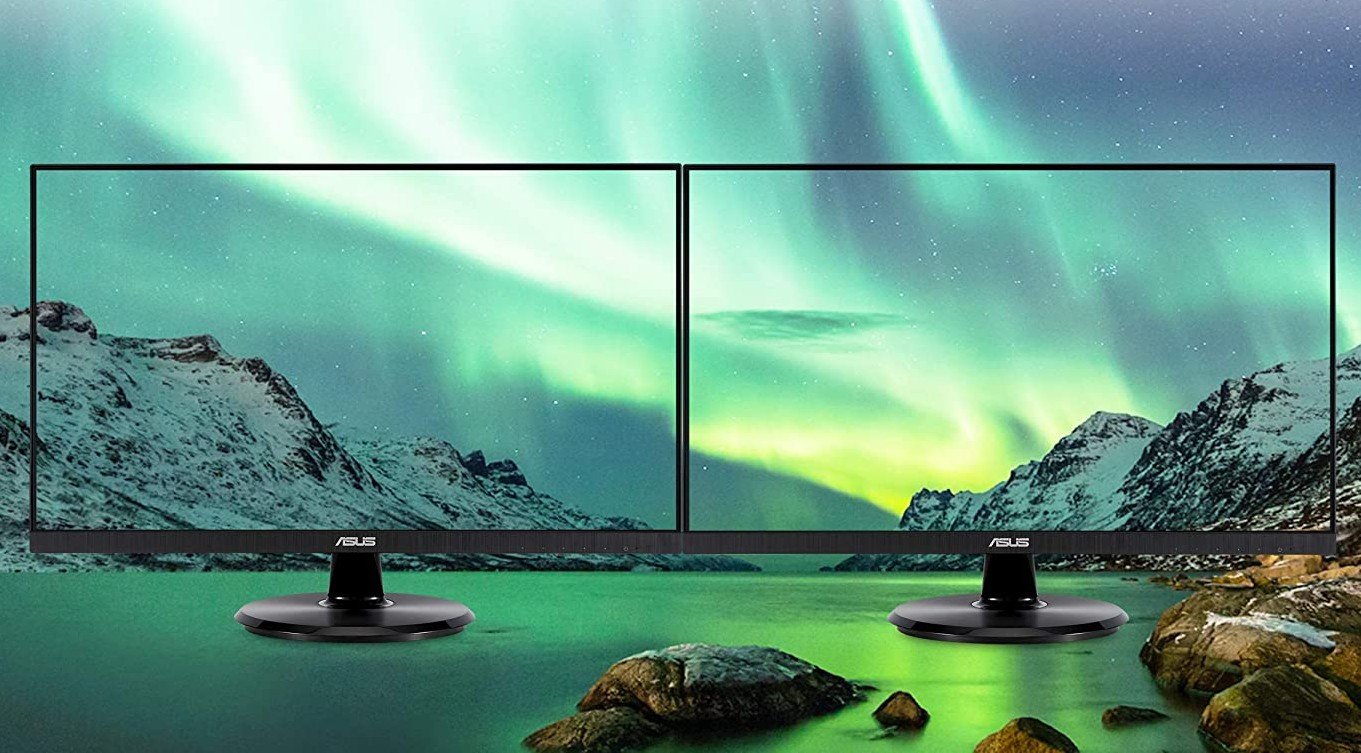 Image by Asus via Amazon

Top-of-the-range gaming monitors have outstanding capabilities but are often quite pricey. Many gamers don’t need the highest specs for the games they play, and some players can’t afford to spend hundreds on a monitor.

Luckily, it doesn’t cost much to get a gaming monitor with decent specs. There are many reasonably-priced options with fast refresh rates and low response times. Many monitors in this low price range include gamer-friendly features, like adaptive sync technology and software modes to optimize performance.

On the downside, affordable monitors lack the luxuries of their more expensive counterparts. Less expensive monitors concentrate on performance and cut out extra features like RGB lighting, exciting designs, and USB ports to stay within a certain price bracket.

These are the best gaming monitors under $150.

AOC’s G2490VX offers a superb balance between price and performance. It’s one of the few monitors in this price range offering a 144Hz refresh rate, making it worthwhile for competitive players. One way it achieves the high refresh rate at such a low price is by using a vertical alignment (VA) panel. VA panels are prone to ghosting and have less accurate color than more expensive in-plane switching (IPS) panels.

For a budget monitor, the G2490VX punches above its weight when it comes to specs. The 24-inch screen boasts Full HD 1920×1080 resolution and a fast response time of one millisecond. Like most gaming monitors, this AOC model has adaptive sync technology to prevent screen tearing. In this case, AMD FreeSync compatibility is standard.

Like many affordable monitors, the G2490VX has a minimalist design. There’s no fancy lighting or exciting patterns. Instead, there’s a thin red stripe on the bottom bezel, and the rest of the monitor is black with subtle branding. Connectivity options are limited to a single DisplayPort 1.2 and an HDMI port 1.4. A 3.5-millimeter audio output comes standard, but there are no USB ports.

Considering the price, the G2490VX has a lot to offer. The 144Hz refresh rate and one-millisecond response time make this AOC model appealing, but some users might be turned off by the VA panel and lack of USB ports.

The Lenovo G24-10 is the same size as the G2490VX, but it uses a twisted nematic (TN) panel instead of a VA panel. TN panels are known for their affordable price and quick refresh rates. The disadvantages are that they have narrow viewing angles and average color reproduction.

By using a TN panel, the G24-10 achieves a high refresh rate at a low price. This 24-inch Full HD 1920×1080 monitor has a respectable 144Hz refresh rate with a one-millisecond response time. Instead of FreeSync compatibility like the G2490VX, this Lenovo model ships with Nvidia G-Sync compatibility.

Another way Lenovo kept the price of the G24-10 low is the simple design. The G24-10 looks more like an office monitor with its thick bezels and chunky V-shaped legs. Apart from the Lenovo logos on the front and rear, there’s no indication of the monitor’s gaming performance. Like the G2490VX, there’s only a single DisplayPort 1.2, an HDMI 1.4 port, and no USB port. Even the adjustability options are limited to tilting between minus five and 22 degrees.

The G24-10 matches the 144Hz refresh rate and one-millisecond response time of the G2490VX for a similar price. Both monitors have the same connectivity options, and it’s up to the buyer to decide if they prefer a TN or a VA panel.

For such an affordable monitor, LG’s 24MP59G-P boasts a strong feature set and excellent connectivity options. Instead of a VA or TN panel like the options mentioned so far, the 24MP59G-P uses an IPS panel. IPS panels are generally more expensive, but they have better color accuracy and wider viewing angles than other panel types.

The display on the 24MP59G-P is the same size as the G24-10 and G2490VX, but it has a slower refresh rate. This monitor uses a 23.8-inch IPS display with Full HD 1920×1080 resolution. The refresh rate is limited to 75Hz. Like other monitors on the list, this LG model includes AMD FreeSync to reduce screen tearing. By default, the 24MP59G-P has a five-millisecond Grey-to-Grey (GTG) response time, but it can be reduced to one millisecond when Motion Blur Reduction is active.

Like most affordable monitors, the 24MP59G-P has black bezels with subtle branding and no RGB lighting. The only hint of its gaming prowess is the red accents on the V-shaped legs. It matches the other monitors on this list by including a DisplayPort 1.2, HDMI 1.4, and a 3.5-millimeter audio out port. Unlike the monitors mentioned so far, there’s also a VGA port, making it compatible with older PCs.

The Asus VA24DQ is a direct rival to the 24MP59G-P and features similar specs. This Asus model also uses a 24-inch Full HD 1920×1080 IPS panel with a 75Hz refresh rate. Instead of only being compatible with FreeSync like the 24MP59G-P, this monitor also works with Nvidia G-Sync.

Most of the connectivity options on the VA24DQ mimic the 24MP59G-P. Both monitors have a single DisplayPort 1.2, a VGA port, an HDMI 1.4 port, and a headphone jack. They both lack USB ports. The VA24DQ stands out by including a set of built-in two-watt speakers. These included speakers aren’t the most powerful, but they are helpful in a pinch when no headset or external speakers are available. Another area where the VA24DQ beats the 24MP59G-P is the inclusion of a VESA mount system.

In terms of design, the VA24DQ looks like a standard office monitor. Like the 24MP59G-P, it has a black exterior with thin bezels and the Asus logo on the front and rear. The only adjustability option is the tilt functionality ranging between minus five and 23 degrees.

For a budget-friendly monitor, the VA24DQ has enough features to satisfy casual gamers. However, the lack of USB ports and slower refresh rate might not cut it for some players.

The E275W-FPT from Sceptre offers impressive value by matching specs of the Asus VA24DQ and LG’s 24MP59G-P while having a larger screen size. It’s the only monitor on this list with a 27-inch display, which some users might prefer to the smaller 24-inch rivals.

This IPS monitor has the same Full HD 1920×1080 resolution as the other options on this list and matches the 75Hz refresh of the VA24DQ and the 24MP59G-P. While the refresh rate is decent, the response time of five milliseconds is a bit slow, and there’s no adaptive sync included.

From a design perspective, the E275W-FPT keeps things plain and simple. It has a standard black design with thick bezels and a circular base. It’s the only monitor on this list to have two HDMI ports, but it has no DisplayPort. Other connectivity options include a VGA port and audio in and out ports. Like the Asus VA24DQ, it has a set of built-in speakers.

Sceptre’s E275W-FPT gives users a large screen size for a low price, but some tradeoffs come with the larger display. The lack of a DisplayPort and adaptive sync might be an issue for some users. The five-millisecond response time isn’t great for competitive gaming either. This monitor is worth a look for users in need of an affordable solution, as long as they aren’t planning on doing any competitive gaming.