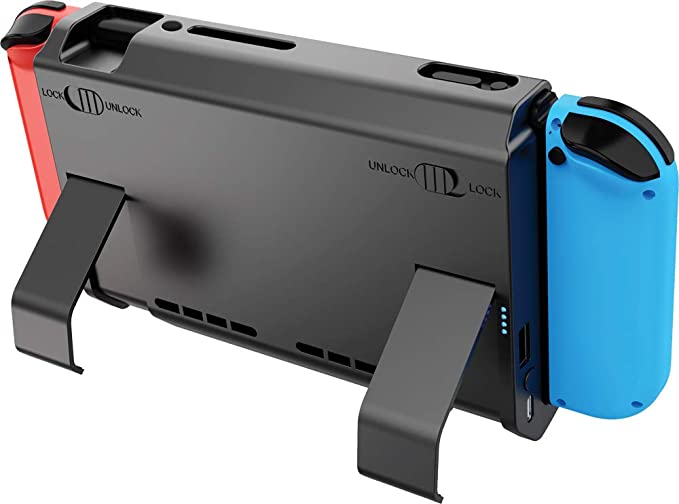 The Nintendo Switch comes with a 4,210mAh battery capacity, which translates to between 2.5 to 6.5 hours of playing time. But this figure changes drastically depending on the settings and the game. Once the Switch’s battery dies, it takes around three hours for a full charge.

While the short battery life might be fine for couch gamers, it isn’t sufficient for those who play on the go and need more power. An easy way to boost the power on a Nintendo Switch is to pick up an extended battery pack. Extended battery packs are portable and store enough energy to recharge the Switch when it runs out of power.

Battery packs come in different capacities, so users have to decide how much power they need before purchasing one. Higher capacity power banks tend to be heavier and cost more than lower capacity alternatives, so there’s often a trade-off depending on the users’ needs.

The designs of power packs also vary. Some are made specifically for the Switch and don’t work well with other devices. Others are more generic and can charge the Switch or phones and tablets.

These are the best extended battery packs for the Nintendo Switch.

Venom’s Switch Power Pack is easy to use and has ample power to boost the Switch’s battery. It also has an unobtrusive design that connects directly to the console with no need for extra cables.

This power bank is designed especially for the Switch and attaches directly to its back to charge. There are two sliders at the back of the Venom to control the attachment clips. When the sliders are unlocked, the clips are loosened and the Switch can slide into place. Users can then lock the sliders to hold the Switch firmly in place.

Compared to many power banks on this list, the Venom is well thought out and user-friendly. The Venom has cutouts for users to connect their headsets or insert games. The rear of the power bank features two kickstands, and they are more supportive than the single stand that comes with the console. Thanks to the kickstands, users can also choose between holding the Switch or standing it on a desk to play while it charges. There’s also a single USB-A port on the power bank for users to charge their controllers and other devices.

Apart from its practicality, the Venom power bank has adequate power to charge the Switch. At 10,000mAh, the battery capacity is twice the console’s capacity, and users can expect up to 13 hours of power from it.

The Venom Switch Power Pack ticks many boxes. It provides extra power to the Switch without the inconvenience of cables. Thanks to its user-friendly design, the Venom doesn’t get in the way of the player’s gaming and allows them to hold the console or place it on a desk to charge. Another benefit is its reasonable price, so it’s accessible to most Switch fans.

Bionik’s Power Commuter provides users with an all-in-one travel solution for their Nintendo Switch. Its canvas exterior protects the Switch from bumps and scratches, and there’s space for extra cables and cartridges. The main advantage of this case is its dual-functionality as a case and a battery pack.

The Power Commuter is tough enough to transport the Switch and its accessories safely. This case is pretty large, measuring 11.6 by 6.5 by 3.0 inches (LxWxH), and is made from water-resistant canvas. One of the reasons for its massive size is the number of compartments it has to store the console and accessories. There’s a small compartment on the front that’s ideal for cables and earbuds. The next compartment is padded with 18 individual slots for games and a mesh pocket for Joy-Con controllers. Finally, users can store the Switch in the thickly padded main compartment.

Multiple devices can be charged on the Power Commuter. Like the Venom, It comes with a 10,000mAh battery, which should be enough for many hours of play. Bionik also includes a USB-A port for users to connect and charge other devices like mobile phones or tablets.

Despite the Power Commuter’s robust feature set, it has one glaring flaw. One of the most significant shortcomings is that it can’t charge the Switch on the go because the battery pack is in another compartment. The Power Commuter doesn’t come cheap, but it’s worth it for players on the move who want to protect their Switch and carry extra games and accessories with them.

The GuliKit Switch PowerPack is a more compact and practical mobile power solution for the Nintendo Switch, but it has a different design than the Power Commuter. Instead of doubling as a protective case, the Switch PowerPack is designed to give players the maximum amount of playing time without interruptions.

GuliKit’s Switch PowerPack may look similar to other black box alternatives, but it has a mounting system closer to the Venom. It has a clip mechanism that hooks onto two edges of the console to keep it firmly in place. Once the clips are connected, the battery pack is attached to the back of the Switch, and users can play while it charges. This unobtrusive charging system also works on other devices because the clips are adjustable.

This power bank has the same battery capacity as the Power Commuter and the Venom, but it has more ports. At 10,000mAh, the Switch PowerPack can power the Switch for around ten hours. In addition, it has two USB-C ports and a USB-A port so users can charge multiple devices simultaneously if they have the correct cables.

Some users need more than 10,000mAh to charge their Switch on longer trips. Anker’s PowerCore 26800 offers a whopping 26,800mAh of power, so users won’t run out of juice no matter how far they travel.

Users get multiple charges from the PowerCore 26800. This power bank can charge the Switch around six times for a total playing time of around 40 hours. Since the PowerCore 26800 has three USB-A ports, it can simultaneously charge multiple devices like phones and tablets.

Another benefit of the PowerCore 26800 is its construction. The outside has a metal shell to make it more resistant to damage than plastic alternatives.

Compared to most power banks, it has two Micro-USB ports to help it charge faster. When connected to two chargers, the batteries in the PowerCore 26800 can reach their full capacity in just six hours.

Like most tech, the Powercore 26800 has some drawbacks. Considering its high capacity, it’s no surprise that the PowerCore 26800 is bulky and heavy, measuring 7.0 by 3.1 by 0.9 inches and weighing 17.5 ounces. Its large size isn’t the easiest to carry around, but it’s a sacrifice users have to make for this much power.

Users looking for a more portable power bank might consider the Nyko Boost Pak. This accessory is compact, lightweight, and costs a fraction of the PowerCore 26800 and Power Commuter.

Its lightweight design means the Boost Pak can go anywhere, but its compact size causes other issues. This power bank measures 8.5 by 1.6 by 3.4 inches and weighs 7.2 ounces. While the compact design makes the Boost Pak easy to transport, it also inhibits the performance. Compared to other power banks on this list, it only has a 2,500mAh capacity. This low capacity is less than one full charge, and it can only extend the battery life of the Switch by a couple of hours.

The unique design of the Boost Pak has its pros and cons. One of its biggest advantages is that it clips directly onto the charging port of the Switch with no cables required. This design makes the power bank compatible with docking stations, and it also allows users to play comfortably in hand-held mode. The problem is the Boost Pak isn’t compatible with some cases and screen protectors. Compared to the other power banks on this list, the Boost Pak only works on the Switch and no other devices.

Although the Boost Pak has some disadvantages, it’s still worth a look. It may have a small battery capacity, but it’s enough to boost the Switch’s power during shorter trips. The Boost Pak’s low price mitigates other disadvantages like not being compatible with other devices.