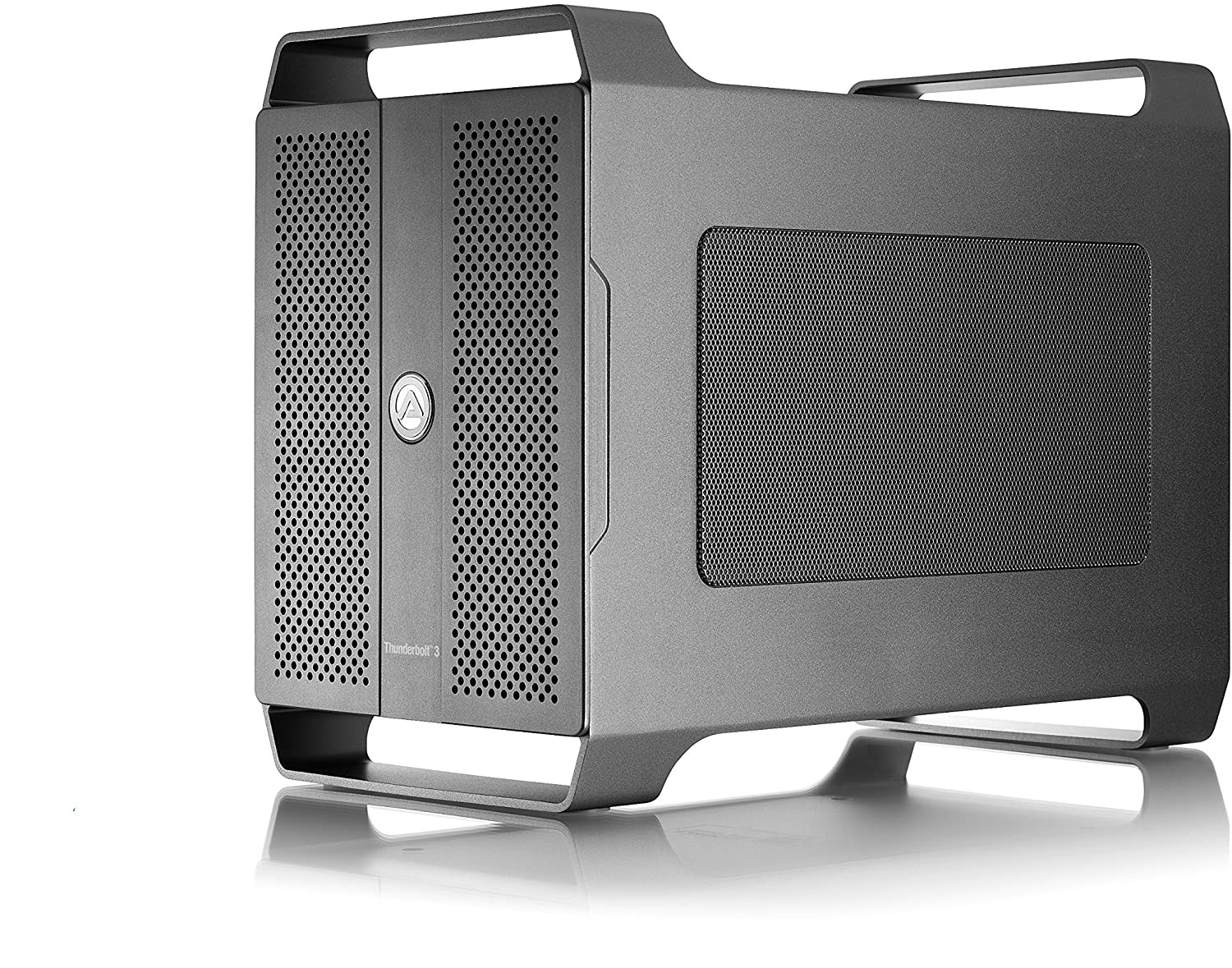 Image by Akitio via Amazon

Upgrading individual PC components is an easy and cost-effective way to increase the longevity of your laptop or PC. External graphics processing unit (eGPU) enclosures house an external graphics card that connects a weaker or obsolete laptop to get the graphics performance of a more powerful machine. Using an eGPU makes it possible to enjoy the latest games on laptops that are not geared toward gaming or power-hungry tasks. But not all enclosures are the same when it comes to available IO ports and power consumption.

All you need to use an eGPU with your laptop is an eGPU enclosure and a laptop with Thunderbolt and USB 3.0 connections. The Thunderbolt port is the most common connector for eGPUs and connects to laptops easily.

Not all eGPU enclosures perform the same, and there are several factors to consider when purchasing an enclosure. Some eGPU enclosures are made for gaming and others for professional high demanding tasks.

Fan and vent design can make an eGPU enclosure more or less noisy and impact the performance of the GPU. It is difficult to avoid noise at a certain power level, but some enclosures are inherently louder than others.

The dimensions of eGPU enclosures vary greatly. It is important to consider the size of the case itself and the space inside the enclosure to know which graphic cards can fit inside.

Some eGPU enclosures have a power supply (PSU), while others do not. Depending on the power supply’s wattage, it may be possible to use the enclosure to charge your laptop.

When it comes to gaming, you can’t go wrong with Asus, especially its ROG sub-brand. The Asus ROG XG Station Pro features two 120-millimeter fans, Thunderbolt 3 compatibility, and is compatible with Nvidia and AMD GPUs from the 900 Series or R9 and above. It also benefits from a steel grey aluminum design, giving it a clean discrete look. The cooling is completely passive when the GPU load is low and won’t be noticeable. The five-foot Thunderbolt cable allows users to place the dock away from their setup or desk for more desk space.

Asus’ eGPU enclosure measures 14.76 by 4.21 by 8.07 inches and accommodates a large range of graphics cards. The enclosure supports Nvidia RTX 20 and 30 series cards, Quadro cards, and AMD Radeon RX and Radeon Pro cards. Mounting the graphics card is simple, and the ROG-XG Station also allows you to replace the 120-millimeter fans with those of your choice. The ROG-XG Station Pro also comes with the Asus GPU Tweak 2 software for personalized control.

This eGPU enclosure doesn’t heat up much, thanks to its external 330-watt power supply, which also helps give the enclosure a compact look.

If you are a gamer and an RGB fan, you might consider the Razer Core X Chroma enclosure. Razer’s RGB-enabled eGPU enclosure is a strong candidate, thanks to its compatibility and value. This eGPU is compatible with Windows 10 and macOS High Sierra 10.13.4 or later. The Core X Chroma can boost the performance of any laptop, thanks to its support for three slot PCIe graphics cards. It comes with one USB Thunderbolt 3, four USB 3.1 ports, one Ethernet port, and Razer Chroma lighting. The massive 700-watt power supply powers the GPU and provides 100 watts of power to compatible laptops via USB-C.

The massive power supply can power the most demanding graphics card except the Nvidia RTX 3080. Buyers may appreciate the ease of installation and that most Founders Edition graphics cards fit inside. Razer also considers the Razer Core X Chroma to be a fast plug-and-play device, requiring little to no fuss after it’s connected. The Razer Core X Chroma features open vents for an optimized for better performance.

Razer’s Core X Chroma is one of the best eGPU models on the market, thanks to its wide compatibility, large power supply, and three-slot GPU compatibility.

The enclosure supports three-slot graphics cards like the Razer Core X Chroma but comes with a 650-watt power supply. Having three-slot support allows the Core X to house most of the latest GPUs from Nvidia and AMD.

Not all eGPU enclosures are made for gaming, and that’s why the Akitio Node Duo made it onto this list. The Node Duo is a high-end enclosure made for power users. Akito’s enclosure has an aluminum finish that gives it a professional and clean look that easily fits any setup.

This eGPU enclosure is also the only one with two PCIe slots and can be used as an expansion box if you need to connect multiple PCIe devices simultaneously. It is possible to provide up to 75 watts of power to each slot if you replace the included 150-watt power adapter with a 230-watt power adapter, according to Akitio. The Node Duo can also charge laptops, like the late 2016 MacBook Pro or iPad Pro, without plugging them into another power source.

You can also install two GPUs in SLI if you have the required power supply. You may also be able to install other components that use a PCIe connection, like a capture card, a sound card, or even an adapter for an M.2 SSD to increase your storage space. Thanks to the dedicated DisplayPort connector, you can get up to two additional displays on your setup.