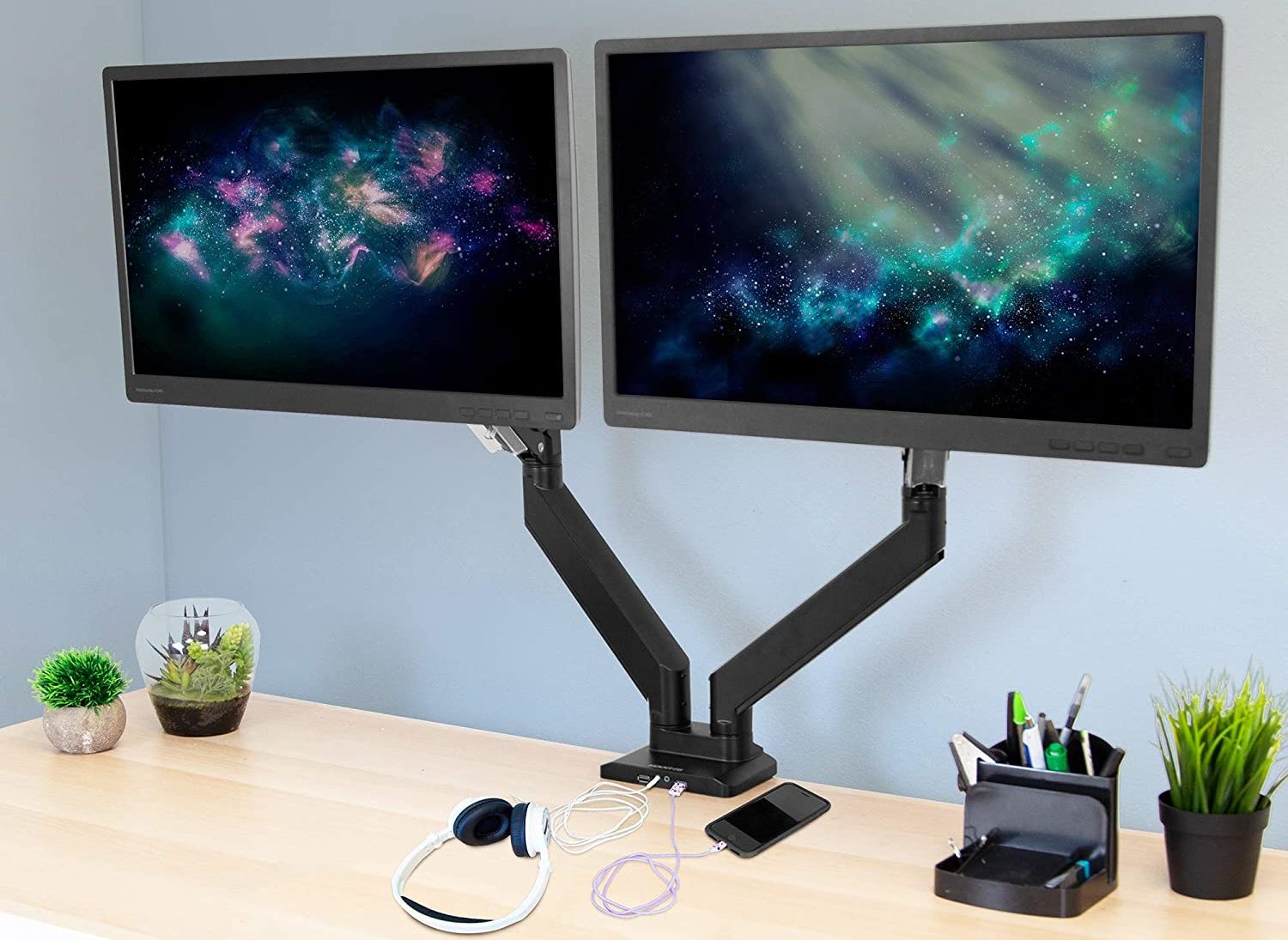 Having two monitors instead of one can drastically increase productivity. Dual-monitor setups allow users to view information on one screen while they type on the other. They also allow users to switch between apps quicker and display twice the amount of information of a single monitor alone.

One of the problems with dual-monitor setups is that they take up valuable desk space and lead to clutter. If users have the two monitors placed on a desk, it can also limit the adjustability and orientation options of the monitors.

These are the best dual-monitor arms.

The Mount-It! MI-4772 makes the top of this list thanks to its compatibility with some of the largest monitors and has a high weight capacity. It uses the VESA mounting system and can handle monitors between 17 and 35-inches in size. Each arm can handle up to 33 pounds, so weight isn’t an issue when attaching large monitors.

Users can easily attach the MI-4772 to a desk, and it has many adjustment options. There’s a C-clamp on the base of the stand, and it easily attaches to most desks. Both arms have a rotating base and hinged elbows so users can adjust the swivel, tilt, and height of each monitor. The MI-4772 also gives users the flexibility of placing their monitors in portrait or landscape modes.

Where the MI-4772 beats its competitors is by having advanced features like built-in audio and USB ports. This stand includes two USB-A 3.0 ports and two 3.5-millimeter audio in and out ports so users can connect their smartphone, mouse, or headset without using up ports on their PC.

As far as dual monitor arms go, the MI-4772 is quite expensive. However, it justifies its price by being compatible with a wide range of monitors and having extra features like audio and USB ports.

Vertical monitor arms don’t have much flexibility, and there aren’t as many adjustment options compared to the other dual monitor arms on this list. Where vertical stands like the Vivo Stand-V002L shine is in their simplicity. This stand sits on any surface and doesn’t require clamps or grommets. While the placement options are limited, users can mount two monitors, one above the other, and save space.

Because of its freestanding design, the Stand-V002L has a lower capacity than the MI-4772. It can accommodate monitors between 13 and 30 inches that weigh up to 17.6 pounds. The base of the Stand-V002L is 10.5 by 15 inches and is heavy enough to counterbalance the monitors.

Despite its vertical design, the Stand-V002L still offers some adjustability options. It offers 360 degrees of swivel, 360 degrees of rotation, and it also allows the monitors to tilt between negative 45 and 45 degrees.

Vivo’s Stand-V002L isn’t the most versatile dual monitor arm, but it has its strengths. It’s affordably priced and easy to install with no clamp required. More importantly, it’s compatible with a range of monitors and provides a space-saving solution to mount them.

If users have a small desk or limited space, they might consider wall-mounted monitor arms. Options like the Huanuo HNWDS1 feature the same mounting and flexibility options of desk-mounted alternatives, but it mounts onto the wall instead.

Huanuo’s HNWDS1 has similar adjustment options to the MI-4772. Its two arms can swivel and have multiple elbows for adjustability. When the monitors are mounted, users can swivel them up to 90 degrees and tilt them between negative 45 and 45 degrees. Users can also rotate the arms through 360 degrees.

Because of its wall-mounted design, the HNWDS1 has a lower capacity than the previously listed alternatives. Compatible monitors range between 17 to 27 inches with a maximum weight limit of 17.6 pounds each. The HNWDS1 comes with VESA mounting brackets to fit compatible monitors.

Wall-mounted monitors save space, but they can be challenging to install. Instead of sitting on a desk or using clamps, wall-mounted arms require users to drill holes in a wall to fasten them securely. This process can cause permanent damage to the wall and might be frowned upon by landlords or employers. When installed correctly, the HNWDS1 frees up valuable deskspace and has various adjustability options.

The Mount-It! Mi-2781B gives users two different ways of attaching it to a desk. This dual monitor arm set is a simple to use freestanding option like the Stand-V002L. If users want a more secure fit, they can use the provided grommet attachment compatible with desks up to 4 inches thick.

The Mi-2781B is compatible with many monitors and offers a wide range of adjustability. It can handle monitors between 19 and 32 inches in size, with each one weighing up to 22 pounds. When it comes to adjustability, the Mi-2781B gives users the option of tilting the monitors between negative 80 and 80 degrees, with swivel up to 180 degrees and 360 degrees of rotation. Both arms can adjust higher or lower on the 16.75-inch pole.

Loctek’s D5D is another dual monitor arm with two attachment options. Instead of freestanding like the Mi-2781B, the D5D works with either a C-clamp or a grommet system.

This monitor has similar adjustment options to alternatives like the MI-4772 and the HNWDS1. Both aircraft-grade aluminum arms have gas springs for added support and allow the monitors to adjust to the user’s requirements. The monitors can rotate to 360 degrees, swivel between negative 90 and 90 degrees, and tilt between negative 15 and 85 degrees. Users can also increase the tension of the elbows to decrease movement and add some rigidity.

Compared to the other dual monitor arms on this list, the D5D has a lower capacity. It can hold monitors between 10 and 27 inches that weigh up to 11 pounds. If users have larger monitors, they are better off trying the Mi-2781B or the MI-4772.

While the D5D has a low capacity, it’s still a worthwhile option. It gives users two ways to attach it to a desk, and it’s compatible with most common monitor sizes. Considering all of its features, this dual monitor arm is reasonably priced and offers good value.