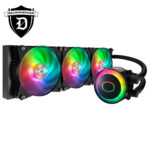 Having one of the most powerful PCs on the market may mean a lot less if your system starts overheating. Rising temperatures will eventually cause you to drop frames and may even damage your components in the long run.

Though graphics cards come with cooling solutions, CPUs need some outside help to keep things in check. Alongside keeping the temperatures down, CPU coolers also extend the life of a processor and tend to be quieter than stock ones.

While picking one up used to be easy since there weren’t many choices available to begin with, the market became saturated over the years with liquid coolers joining the competition. While liquid solutions are the way to go for the lowest temperatures, their prices and overpowered effectiveness allowed traditional coolers to still have a respectable market share.

We’ve gathered the best CPU coolers on the market to save you some time in terms of research and keep your system chilly even during the hot summer months.

Liquid coolers are mostly priced higher than their air-blowing counterparts. That doesn’t mean that you should spend a fortune to upgrade your system, however.

Corsair’s H60 is one of the best budget options on the market if you’re looking to get a liquid CPU cooler. The fan speed can go as low as 600 RPM while it can go up to 1,700 when the load increases. It weighs around 1.32 pounds and features a single color LED on the pump.

The noise levels can go up to 28.3 dBA and the cooler can be installed without using any tools via a mounting bracket.

Noctua has a reputation for producing low-profile fans that offer a great deal in terms of performance.

The NH-D15 carries Noctua’s distinctive brown signature and weighs 2.91 pounds. The fan can rotate up to 1,500 RPM and it can get as loud as 24.60 dbA. It’s definitely one of the quieter fans on the market and offers great value considering its price.

The fan doesn’t offer any RGB lightning, however, which may be a deal-breaker for gamers who care about the bling as much as performance.

If you also want your cooler to complete your full RGB gaming setup, the MasterLiquid ML240P wide color range might be just right for you.

The ML240P’s fans can rotate up to 2,000 RPM while producing a maximum noise level of 27 dbA. The cooler weighs 2.11 pounds. Its transparent pump design also allows colors to flow more freely and you can customize it further with Cooler Master’s Lighting Control software.

The addition of RGB bumps up its price tag compared to its colorless rivals, however. 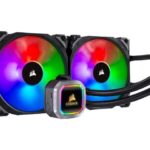 The H115i comes with strong fans that can spin at 2,200 RPM. Though the fan produces almost 50 dBa when it’s working overtime, the sound level goes down to 28 dBa under minimum load while the fans slow down to 360 RPM.

The fan is surprisingly light at 1.8 pounds compared to its similarly-sized competitors. It also has a white offering alongside its classic black. The colors are fully adjustable via Corsair’s software, too.

To match the effectiveness of liquid coolers, air coolers didn’t have a choice but to get bulkier. Though it may lack the bling, the Assassin III’s dual-tower setup puts out one of the best cooling performances among its competition.

The Assassin III is heavier than usual with a weight of 3.23 pounds. The included custom screwdriver eases the installation process. Though two fans mean double the noise, most of the time the Assassin III does a great job of suppressing the sound and doesn’t increase the overall loudness of a build unless it’s working at maximum capacity.

Sometimes gamers just want to max out every spec possible on their PCs and CPU coolers aren’t an exception to that. The MasterLiquid ML360R comes with three fans and may require a bigger PC case to fit in.

With three fans comes great power, however. The ML360R weighs 5.6 pounds and each fan can rotate up to 2,000 RPM. Though most prospective buyers would expect the overall noise to be higher, it seems to stabilize around 30 dBa even under the worst conditions. The transparent CPU block logo is also a nice touch to ensure good looks. Each fan’s RGB settings can be adjusted via Cooler Master’s software.

Most CPUs are designed to handle extreme temperatures. If you’re just looking for a cooler that will prevent your CPU from going above 80 degrees while gaming and already live in a cold environment, then most of the options on our list could be overkill.

The Hyper 212 is one of the most basic and budget offerings. It’s a timeless classic that gets the job done. Its fan can rotate up to 2,000 RPM and can be a bit louder with its 36 dbA noise volume at maximum performance. It weighs 1.3 pounds combined with its four heat pipes.

Its lower price tag and the noticeable performance improvement compared to stock fans makes it the king of the entry-level CPU fans.