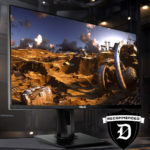 Consoles require less desk space than gaming PCs, allowing gamers to opt-out for different screen solutions than monitors. TVs are usually the go-to choice of console gamers but that doesn’t mean your console won’t be fine with a decent monitor.

If you’re a competitive gamer, your PS4 or Xbox One will perform better on a monitor. Monitors tend to have less input lag compared to TVs and deliver better motion performance. They also take up a lot less space, which can come in handy if you live in a dorm or are just running tight on space.

The competition in the market is intense and it’s hard to navigate through all the options since they’re being marketed toward PC gamers. We’ve done the research part for you, however, and gathered the best gaming monitors for PS4 and Xbox One. 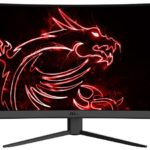 MSI is no stranger to producing quality gaming products. The Optix G27C4 is a 27-inch curved monitor that supports a 1920×1080 resolution.

Though it lacks HDR support—which can be a deal-breaker for console players looking to push a game’s visuals to its limits—the Optix G27C4’s low input lag of 3.6 milliseconds and one-millisecond response time makes it an ideal choice for competitive games like Fortnite or Call of Duty: Modern Warfare.

The Optix G27C4 features an LCD panel that has a refresh rate of 165 Hz and supports FreeSync. While the refresh rate doesn’t mean much for console gamers, it’s a nice feature to have if you’re planning to hook up a PC to your monitor as well. 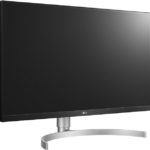 Most companies in the gaming industry prefer advertising their products aggressively toward gamers. LG isn’t like that, however. The company prefers sticking to simplicity and lets its products do the talking when it comes to performance.

LG’s 27UK650-W is a 27-inch, 4K monitor that comes with an IPS panel. It comes with a trade-off, however, which is the monitor’s 60 Hz refresh rate. While this can be a crucial aspect for anyone planning to use their gaming PC with the monitor, the compromise is more than welcomed for console players who’d rather have 4K resolution and HDR.

The colors are accurate and the monitor’s 8.8-millisecond input lag is decent considering its maximum resolution. It’s five-millisecond response time also makes it a decent candidate for playing competitive games.

The FreeSync capable monitor may look like it’s a step behind the monitors with the lowest response times and high refresh rates, but it’s still a great choice for anyone who prioritizes the looks of their games. 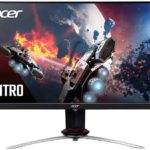 If you were in the market for a laptop recently, the name Acer may be familiar to you. Acer’s products focus on delivering the best performance for gamers of all kinds.

The Acer Nitro XV273X is a 27-inch monitor that supports an IPS panel. It has a native resolution of 1920×1080 and can go up to 240 Hz in terms of refresh rate. The monitor supports FreeSync and has a 2.7-millisecond input lag. Its one-millisecond response time makes it a great option for competitive gamers.

The XV273X has an effortless setup process since it requires no adjustments with its accurate colors. The monitor’s color gamut is a bit narrower than its competition, which may make a visible difference while gaming in HDR. The difference is hard to notice for the average eye, however. 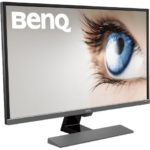 BenQ will have a gaming monitor suitable for you no matter what platform you game on. The company has a separate product line specifically for console gamers.

The EW3270U is a 32-inch monitor with a 4K resolution. It comes with a VA panel and also supports FreeSync. The monitor’s input lag of 9.4 milliseconds makes it a decent pick for semi-competitive gaming. The four-millisecond response time of the monitor alongside its 60 Hz refresh rate strengthens its position on our list.

The monitor is also HDR capable but struggles to get bright enough to take full advantage of the technology. Overall, the EW3270U is a great all-around product that favors gamers who prefer having a better visual quality over more competitive specs. 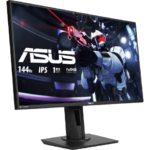 ASUS is about having options. The company produces countless different monitors for all price ranges but the VG279Q features the perfect balance between value and performance.

The VG279Q is a 27-inch monitor with 1920×1080 resolution. It comes with an IPS panel that has a maximum refresh rate of 144 Hz. The FreeSync capable monitor has an input lag of 4.3 milliseconds and a one-millisecond response time. Though it checks all the boxes for the best competitive gaming experience, the monitor lacks HDR support.

It’s also one of the easier monitors to set up since it comes with accurate colors out of the box and has great image quality. 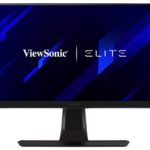 The XG line of ViewSonic features some of the best competitive gaming monitors on the market—and the XG270 is no exception.

The XG270 is a FreeSync capable 27-inch monitor and comes with an IPS panel. It has a maximum refresh rate of 240 Hz and a one-millisecond response time. Once these are combined with its great input lag of 2.8 milliseconds, the monitor becomes a beast for competitive gaming with its lightning-like responsiveness.

Normally, monitors that share similar specifications with the XG270 tend to lack some aspects that remove them from consideration for console gamers. But this one goes against the groove. The monitor also supports HDR, which makes it one of the best options for those who are looking for the best monitor for competitive gaming without making any sacrifices. 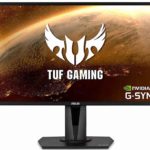 The TUF VG27AQ is a 27-inch monitor with an IPS panel. It’s a great pick for gamers looking for the best of both worlds with its 1440p resolution and maximum refresh rate of 165 Hz.

The VG27AQ has an input lag of 3.5 milliseconds and a four-millisecond response time. It’s also HDR capable, making it a great all-around product.

It supports FreeSync and the colors are accurate. Though it performs well with HDR enabled, gamers with a keen eye may notice that the monitor struggles while bringing out the finer details due to its peak brightness levels.