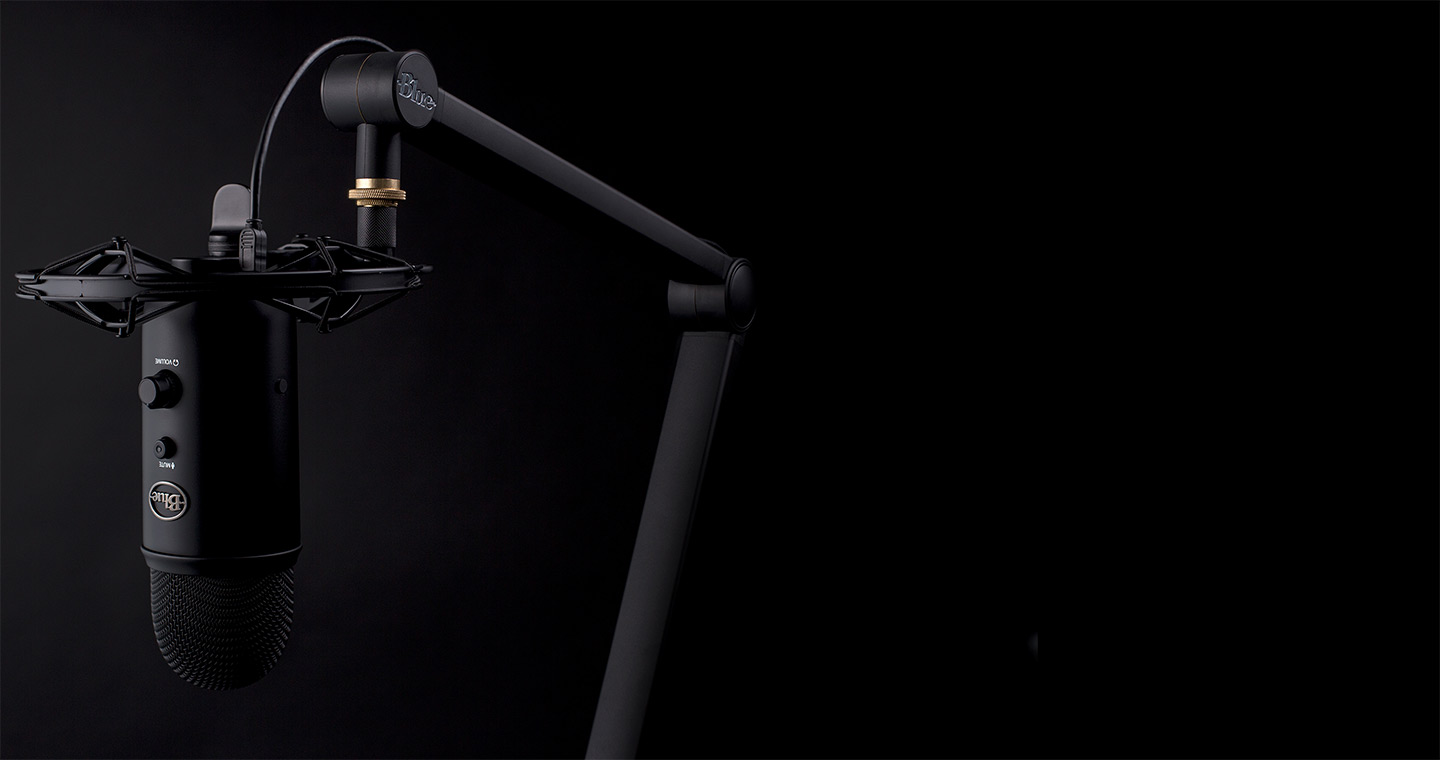 Blue has been producing industry-standard USB microphones for streamers and content creators since the earliest days of online video game content creation. The Blue Yeti served as Blue’s flagship microphone, but there’s always room for improvement.

Since the original release of the Yeti in 2009, Blue has continued to add new variants to their Yeti product line. Today, there are several different Yeti microphones to choose from, so we made a handy list to help break down the differences between all the options and help you decide which Yeti might be right for your needs.

We are kicking off our list with the mic that started it all, the classic Blue Yeti. This microphone is a favorite among video creators, podcasters, and streamers across the world.

It is a condenser microphone with three proprietary capsules in it. The Yeti features four selectable pick-up patterns—cardioid, bidirectional, omnidirectional, and stereo. The microphone also features an external headphone volume knob, a gain knob, and a mute button. With zero-latency monitoring, you can check your audio levels and quality on the fly through the built-in headphone jack.

In terms of build quality, the Yeti is built like a tank. It features all-metal construction, with a guard around the capsule at the top. Every Yeti comes with a stand, but you can always remove the microphone and add it to a boom arm or alternative mic stand if you desire. The design may look a little dated, but it gets the job done.

This microphone connects to your computer via USB, so there is no need for a Digital Audio Converter (DAC). The Blue Yeti is available in several different colors, including silver, black, white, and blue.

The Yeti Nano is the latest offering from Blue. It is slightly smaller than the standard Yeti but brings the same premium condenser microphone audio as the original. Like the original Yeti, the Yeti Nano is a USB microphone. The Nano’s interface features a mute button and a headphone volume knob, but no gain knob.

This microphone features two capsules instead of three, so its audio quality is slightly less than the standard Yeti. It also only offers two pickup patterns to choose from. You can either use the cardioid mode, which will pick up audio from a particular direction, or you can select the omnidirectional mode that picks up audio from every direction. The Nano presents two pickup pattern options, whereas most other Yeti microphones feature four patterns.

Instead of a gain knob, the Nano requires that creators use the Blue Sherpa companion app to fine-tune their gain and control other settings on the microphone like the polar patterns or sample rates. The Sherpa application will also soon feature VO!CE, which is the broadcast vocal effects suite made by Blue to improve your recording sessions and apply real-time effects to your livestream broadcasts. This software was previously only available on the Blue Yeti X.

The Yeti Nano is the most affordable mic in the Yeti line while still offering premium recording quality. The biggest frustration with this mic is the inability to turn a physical gain knob like you can with a traditional Yeti microphone.

The Blue Yeti X is Blue’s state-of-the-art flagship USB microphone, built specifically with streaming, gaming, and podcasting in mind. The biggest hardware upgrade for this microphone is the number of capsules inside the condenser array. The traditional Yeti features three capsules, while the Yeti Nano features two capsules. However, the Yeti X features four capsules, which, in theory, translates to a higher standard of recording. It also features the full four pick up patterns like the standard Yeti.

The overall design of the Yeti X has been sharpened from its predecessor. Blue’s Yeti X boasts a higher build quality than the standard Yeti and has a slicker look and superior feel to the buttons. The front of this microphone has the most advanced sound monitor of any Yeti microphone to date, featuring an 11-segment LED sound meter. This lets you know your audio volume output at any given moment, allowing you to adjust on the fly during live streams and meetings. It’s a nice additional affordance that will hopefully become standard in Yeti products in the future.

This microphone was the first Blue product to gain access to the new VO!CE feature in the Blue Sherpa companion application. In total, this software currently features seven broadcast vocal effects that can be used to warm, cool off, and otherwise adjust the tone and qualities of the voice recording.

As a side note, there is also a World of Warcraft edition of the Yeti X, which features a very cool smoke grey and rose gold finish. In addition to the sweet new color layout, this version of the mic comes with a number of voice modulations of Warcraft characters and audio samples from Shadowlands and Warcraft.

The Yeti Pro is Blue’s premium studio-quality offering in the Yeti line. The design of the product itself doesn’t feature the latest visual upgrades like the newer Yeti X but excels by providing ultra-high 24-bit digital recordings, rather than the 16-bit recordings the rest of the Yeti line is capable of capturing. The Pro also features both a USB plug and an analog XLR plug, meaning it can be used in either USB mode or with a DAC or preamp. It even comes with both a USB cable and an XLR breakdown Y-cable.

Besides the higher quality recording and the XLR plug, this microphone most closely resembles the standard Yeti. It contains three capsules, four standard pickup patterns, zero-latency self-monitoring, a headphone volume knob, and a physical gain knob. If you are into gaming and streaming but are considering making music, this microphone might be right for you.

This mic is more of an investment than others, but it can grow with you, saving you the need to buy an expensive XLR compatible mic down the line, should you decide to upgrade your gaming set up with a DAC or preamp.