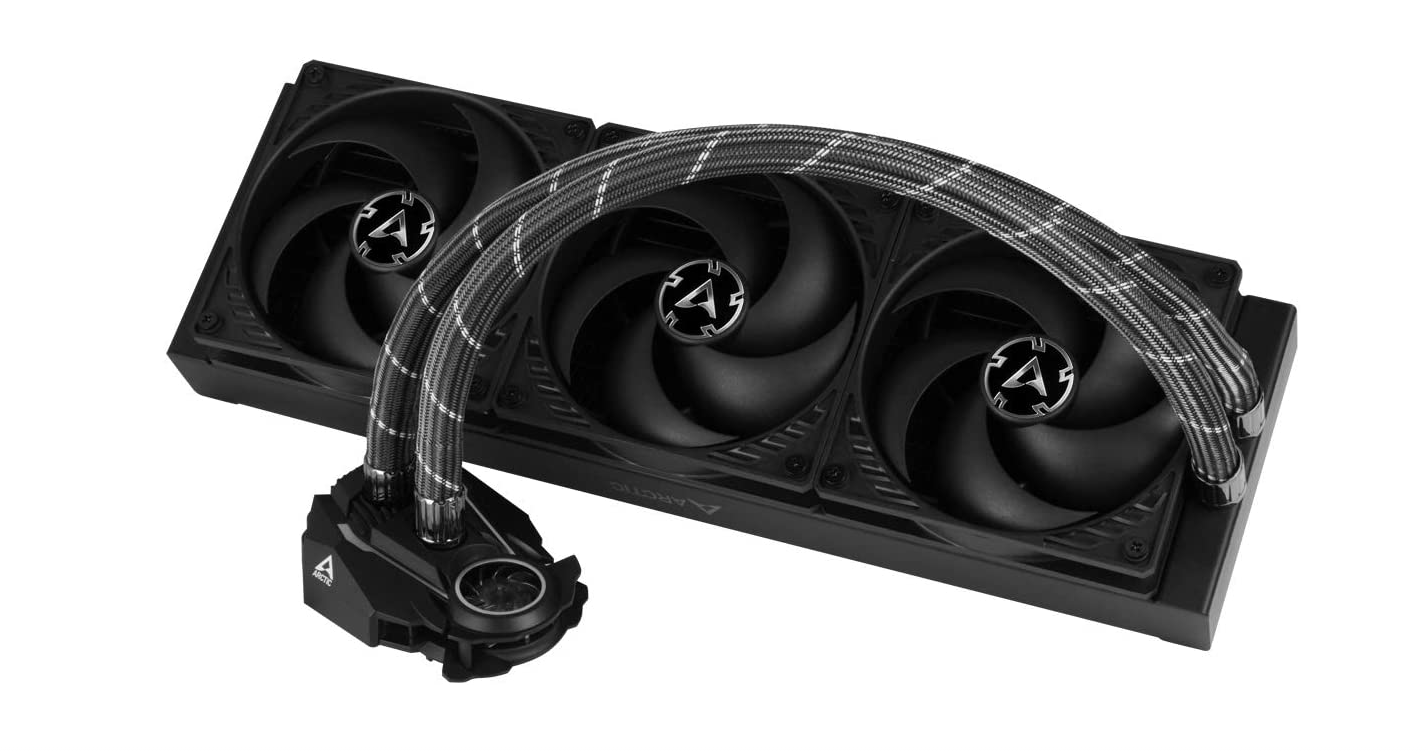 Image by Arctic via Amazon

All-in-one (AIO) liquid coolers are an efficient way to cool down a processor, and they are easy to install. Liquid is also a better heat conductor than air, making liquid cooling a more efficient cooling solution.

Instead of using a fan and heat pipes to transfer the processor’s heat, AIO’s use a pump and radiator system. The system involves a cold plate sitting on the processor, which absorbs the heat from the CPU and transfers it into the water in the system. The pump then pushes the warm water through pipes to a radiator, cooling it down and starting the cycle again.

These are the best 360-millimeter AIOs available today.

Corsair’s Hydro Series H150i is the largest and most powerful AIO in the company’s lineup. It comes with three ML120 Pro pulse width modulation (PWM) 120-millimeter fans running up to 1,600 rotations per minute (RPM). The fans generate an airflow of up to 43.7 cubic feet per minute (CFM) and operate between 10 and 25dB.

There are four different operational modes, with some prioritizing fan performance and others optimized for quiet operation. The four modes include Zero RPM, Balance, Quiet, and Extreme. Corsair’s iCUE app controls lighting and performance settings and monitors real-time performance.

This AIO liquid cooler is pricey, but it has outstanding performance and build quality. It’s powerful enough to cool most processors, and users get a five-year warranty. The minimal RGB lighting might be appealing for some buyers, but it’s a turn-off for others.

Where the Thermaltake Floe DX 360 excels is its software. Instead of a desktop app only like some alternatives, users can install the TT RGB mobile app to monitor and configure the cooler anywhere. Alexa voice control is another included feature, but a separate compatible device is required.

Thermaltake’s Floe DX 360 has all-around capabilities, making it a solid choice. It offers great cooling properties, boasts integrated RGB lighting, and features software that works from anywhere. The mid-range price of the Thermaltake Floe DX 360 also puts it within reach of most buyers.

NZXT’s Kraken Z73 shares most of the characteristics of the Floe DX 360 and the H150i, but it has an LCD display. The 2.36-inch LCD screen sits on the pumps and displays the temperature and other information. Users can also upload personalized images and GIFs to the screen using NZXT’s CAM software.

There’s no RGB lighting on the fans, but it won’t matter to users looking for performance. Like on the H150i, the three 120-millimeter fans cool the system without any light displays. Fans spin at between 500 and 2,000 RPM and generate airflow between 27.27 and 98.17 CFM. The noise levels on this AIO cooler are about average, ranging between 21 and 38dB.

While the Kraken Z73 offers great cooling, its price is pushed up by the LCD screen. The display might be worth the extra cash for some users, but others might consider a cheaper alternative with similar performance.

Buyers looking for a no-frills, mid-range alternative to the Kraken Z73 might consider the Arctic Liquid Freezer II. This AIO cooler is performance orientated and doesn’t come with flashy RGB lighting. Instead, it has an extra fan to cool the motherboard’s voltage regulator module (VRM) chips.

Arctic’s Liquid Freezer II may be reasonably priced, but it has top-tier performance. Its three 120-millimeter fans spin between 200 and 1,800 RPM and generate airflow up to 55.6 CFM. They also have a maximum noise level of 35.8dB.

One of the unique features of the Liquid Freezer II is the fan on the pump housing. The 40-millimeter fan spins at between 1,000 and 3,000 RPM, providing extra cooling for the motherboard. Arctic acknowledges that smaller fans are prone to breaking and offer replacements free of charge if buyers call customer care. The company also offers an extended, six-year warranty on the entire unit.

It’s refreshing to find an AIO cooler that offers top-notch performance without adding unnecessary features. The Liquid Freezer II keeps things simple by cooling down the processor without worrying about aesthetics or lighting. Cutting out those features also keeps the price down, so users get outstanding value.

EVGA’s CLC 360mm is a budget-friendly AIO cooler that focuses on performance instead of looks. Like the Kraken Z73 and the Liquid Freezer II, it doesn’t have any lighting on the radiator or fans. There’s only minimal lighting on the pump’s EVGA logo.

The CLC 360mm has the fastest spinning fans of any cooler on this list. Its three 120-millimeter fans run between 500 and 2,400 RPM and generate a maximum airflow of 74.82 CFM. While the fans on the CLC 360mm have the fastest maximum rotation, they also make the most noise. Ranging between 16.0 and 39.9dB, the CLC 360mm noise levels can hit very high and might put off some users.

Despite having limited lighting, the CLC 360mm still features software control. EVGA’s Flow software can adjust the RGB lighting, but its primary function is to monitor the cooler’s temperature and fan speed. Apart from displaying information, the software also allows users to adjust the performance and noise settings.

While the EVGA CLC 360mm costs less than half the price of rivals like the Kraken Z73 and H150i, it can still compete when it comes to performance. Its only disadvantages are that it has a more subdued design, and it can be noisy depending on the load.