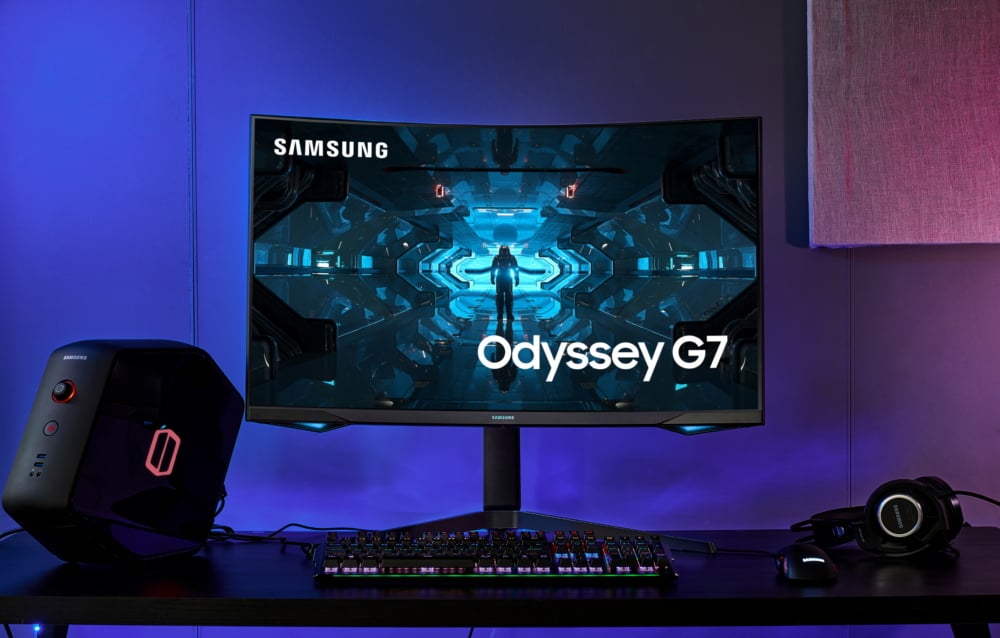 If you want to run modern games at the highest framerates, you need a monitor to keep up with your PC’s performance. A monitor’s refresh rate plays a huge part in how fast images are displayed on the screen and your gaming experience’s overall quality.

Many entry-level monitors start at only 60Hz. Gaming monitors typically go higher, often reaching 144Hz, 240Hz, or higher refresh rates. Monitors with 240Hz refresh rates display up to 240 frames per second (fps) to deliver excellent picture quality with no stuttering. Casual gamers might not appreciate having the highest frame rates, but it can be the difference between winning and losing for competitive players.

Adaptive sync technology is common among gaming monitors and works with the monitor and GPU to prevent visual artifacts like tearing and stuttering. Many monitors have adaptive sync technology like Nvidia G-Sync and AMD FreeSync. These proprietary technologies ensure the framerates on the screen match the graphics card’s frames. When the two framerates match, the picture is fast and fluid with no screen tearing.

These are some of the best 240Hz monitors on the market.

The Alienware AW2721D has an excellent balance of style and performance. It has a 27-inch screen with a 2560×1440 Wide Quad HD (WQHD) resolution. WQHD resolution sits between Full HD and 4K and offers the best of both worlds. The pixels are dense enough for crisp, detailed graphics, and the speed is fast enough for pros.

A fast response time is another critical factor when it comes to gaming monitors. The AW2721D has a one millisecond Grey to Grey (GTG) response time. There’s also Nvidia G-Sync to get the most out of the 240Hz refresh rate.

The AW2721D uses an In-Plane Switching (IPS) panel. IPS panels are known for displaying vivid colors and having wide viewing angles. They also tend to have mediocre black contrast. The IPS display on the AW2721D has a wide 178-degree viewing angle making it easier to view from different seating positions.

There are enough connectivity options on the AW2721D to connect multiple devices. It comes with two HDMI 2.0 ports, a DisplayPort 1.4, and four USB ports. The audio connections include a 3.5-millimeter headphone jack and a line-out jack.

The Alienware AW2721D has outstanding performance, and it looks unique compared to all the other gaming monitors out there. The only disadvantage is that it doesn’t come cheap.

The BenQ ZOWIE XL2740 is another 27-inch monitor with a 240Hz refresh rate. Instead of the WQHD resolution found on the Alienware AW2721D, it has a Full HD 1920×1080 resolution. The resolution may be less than the Alienware alternative, but the graphics quality is still impressive because of the high speed. Like the AW2721D, the XL2740 features G-Sync compatibility.

Compared to the Alienware AW2721D, the XL2740 uses a Twisted Nematic (TN) panel with a one millisecond response time. TN panels are typically more affordable than their IPS counterparts and have faster refresh rates. The downside of TN panels is that the color accuracy isn’t fantastic, and they have narrower viewing angles.

BenQ ZOWIE’s XL2740 has an understated look compared to the AW2721D. It has an entirely black design with subtle red accents and no RGB lighting.

A couple of design features you don’t find on many rivals are the headset hanger and the removable flaps. The headset hanger provides a handy place to store your headset because it’s out of the way behind the screen. The flaps block out unwanted light from creating glare, and they also help with privacy.

One of the standout features is the S Switch. The S Switch is a pod-like controller that sits on the monitor’s base and allows you to control certain features. It’s a handy tool to switch between input modes or display profiles without hunting for buttons.

The BenQ ZOWIE XL2740 is way more affordable than the Alienware AW2721D but still offers superb speed. Unfortunately, the lower price comes at the expense of a higher resolution.

The Acer XF250Q is smaller than the other monitors mentioned so far and comes at a far lower price. Instead of a 27-inch display like the BenQ ZOWIE XL2740 and the Alienware AW2721D, the XF250Q uses a 24.5-inch screen. The difference isn’t much on paper, but many users prefer the smaller display because they don’t have to turn their heads to see all the action.

Acer keeps the costs of the XF250Q low by using a TN panel with Full HD resolution but maintains a one millisecond GtG response time. Despite its use of a TN panel, the XF250Q still has a relatively wide 170-degree viewing angle. Instead of having G-Sync compatibility like the other monitors discussed so far, the XF250Q features FreeSync compatibility.

Another way Acer keeps the cost down is the simple design. The XF250Q has a full-black finish and can be easily mistaken for an entry-level office monitor. The connectivity options include an HDMI 1.4 port, an HDMI 2.0 port, a DisplayPort 1.2 ports, and a 3.5-millimeter jack. A feature not found in the other monitors on this list is the built-in two-watt speakers.

The main reason to choose the Acer XF250Q is its price. It costs a fraction of the ZOWIE XL2740 and the Alienware AW2721D, but it still offers a 240Hz refresh rate and adaptive sync technology.

The Samsung Odyssey G7 sits in a completely different category than the other monitors mentioned so far. It has a massive 32-inch curved screen that’s ideal for PC and console gamers. The large screen size also makes the Odyssey G7 an excellent choice for watching movies or streams.

Another benefit of the Odyssey G7 is the high resolution. Like the Alienware AW2721D, the Odyssey G7 has a WQHD 2560×1440 resolution and a one-second GtG response time. It also benefits from Samsung’s QLED and HDR compatibility to display vivid colors. The Odyssey G7 includes adaptive sync that works with both AMD and Nvidia graphics cards.

Samsung’s Odyssey G7 uses a different type of panel from the rivals we’ve mentioned so far. Instead of an IPS or TN panel, it uses a Vertical Alignment (VA) panel. VA panels are typically a middle ground between the other panel types. They generally have better refresh rates than IPS panels and better color reproduction than TN panels.

The curved design of the Odyssey G7 sets it apart from many of its rivals. The front has discrete lighting on the bottom corners, and there’s another lighting ring where the screen joins the stand. There are two DisplayPort 1.4s, an HDMI 2.0 port, two USB ports, and a headphone jack when it comes to connectivity.

The Odyssey G7 may be pricey, but it justifies the price tag by offering similar performance to the other screens on this list with a bigger screen.

The Asus ROG Strix XG17AHPE sits on the opposite spectrum of the Odyssey G7. It’s a tiny 17.3-inch portable monitor designed for gaming on the go. Despite its compact size, the IPS panel boasts a Full HD 1920×1080 resolution, a three milliseconds response time, and adaptive sync technology.

The compact design of the ROG Strix XG17AHPE makes it ideal for gaming on the move. It’s very thin at 0.4 inches and weighs just 2.2 pounds. One of the disadvantages is the limited connectivity options. There are only two USB-C ports, a micro-HDMI port, and a headphone jack.

Many practical features make the ROG Strix XG17AHPE a brilliant option if you need a portable monitor. It comes with a magnetic case that doubles as a stand and a separate pedestal stand. Another excellent feature is the built-in 7800 mAh battery with a three-hour battery life that allows you to play without needing a power connection. If you don’t have a headset, you can use the built-in one-watt speakers. The monitor and all the accessories fit into the supplied carry bag.

Unfortunately, the Asus ROG Strix XG17AHPE is a niche product that costs as much as a desktop monitor. It’s only worth getting if you need the mobility. If not, there are better options available.