Asus ROG announced its newest high-performance Wi-Fi router, the Rapture GT-AX6000, today. The Rapture balances modern features with an aggressively futuristic look that might not before everyone. 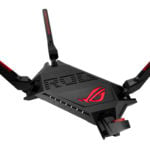 Another key feature is the Broadcom 2.0GHz quad-core 64-bit CPU and Wi-Fi chipsets that increase network throughput by 18 percent compared to prior Broadcom Wi-Fi 6 models. This can translate to faster performance and data transfer speeds. The Rapture GT-AX6000 shares this same DNA with its $649 quad-band sibling, the Asus ROG Rapture GT-AXE16000 that was announced during CES 2022. While it isn’t quite as beefy, the Rapture GT-AX6000 still presents plenty of performance for the average gamer at a glance.