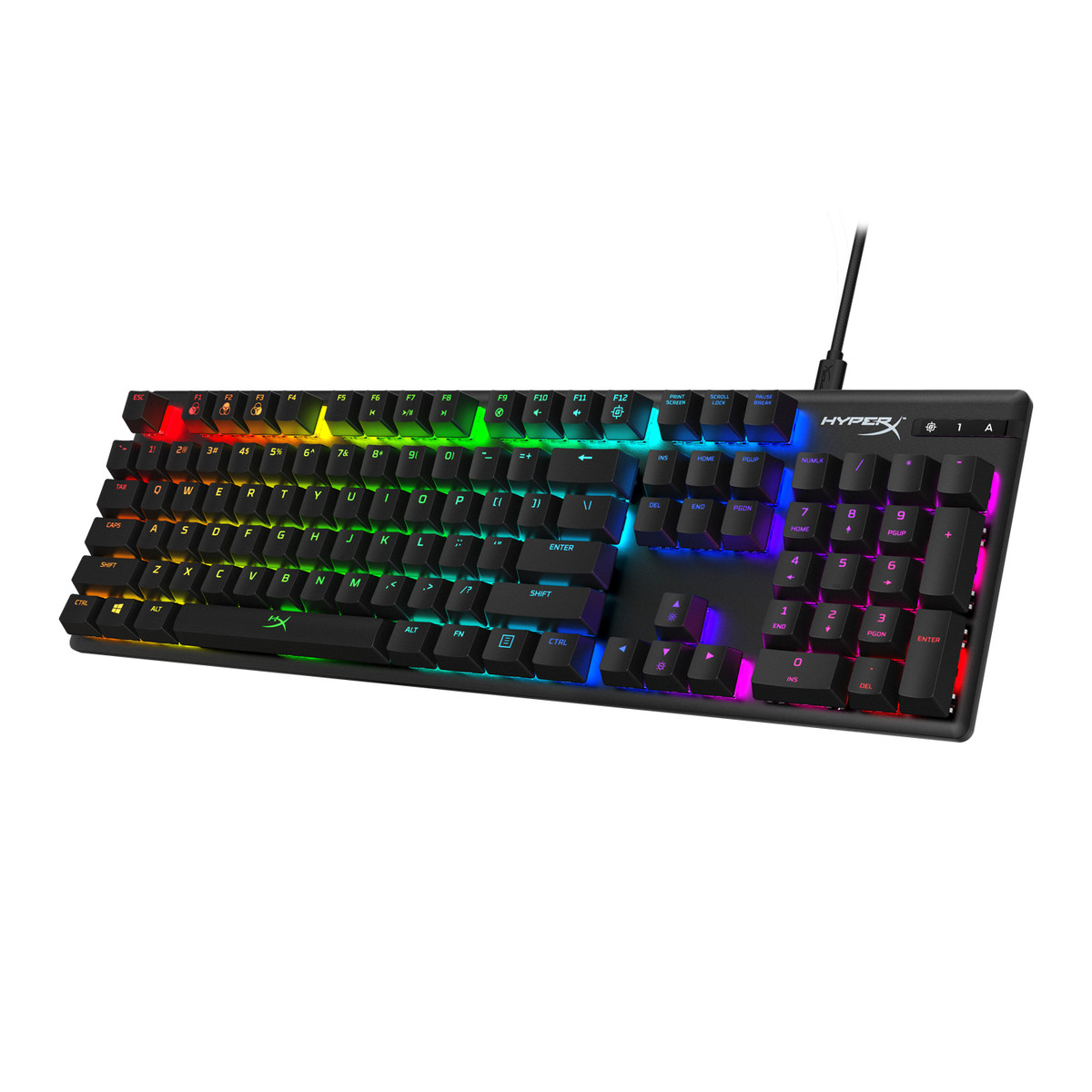 Every major peripheral company makes its own proprietary key switch these days. But much like every other aspect of the market, not all are created equal. HyperX proved it knew what it was doing with the launch of its proprietary Red switch and continues to lead by example with the HyperX Alloy Origins Aqua switch variant.

From the onset, nothing is really “new” in terms of the appearance of the Aqua variant of the Alloy Origins keyboard. Users will still get the sturdy aircraft-grade aluminum that makes up the body of the board that contributed heavily to the Alloy Origins being on our best keyboards of 2019 list. RGB lighting effects are a delight if you’re into vivid colors and infinite customization. Nobody does RGB quite like HyperX and the fact that the RGB somehow stands out is highly impressive given that RGB lighting is more-or-less the same across the market.

We’ve said before that we don’t necessarily think the OLED strip on the top right corner of the Alloy Origins keyboards is necessary. The OLED strip indicates whether Caps Lock, Num Lock, and Gamer Mode are active and it just seems like its chasing the OLED trend that nobody seems too excited about. It’s a nitpick thing but we just don’t quite understand the value trend.

Our second and last nitpick issue is the HyperX logo on the spacebar. It isn’t “heavy” in terms of its size but it looks awkward and we could do without it since there’s a rather large HyperX logo next to the OLDE strip in the top right corner. Minimal branding is always the best in our opinion. The HyperX Alloy Origins can speak for itself and we wish companies would let their products do so without intrusively blasting their logo on the spacebar. But again, this is a minor nitpick.

As always, the stabilizers are just better than most mainstream keyboards out there right now. The feeling is much more akin to some enthusiast builds that have taken care to properly lube stabilizers to ensure smooth action and that “thock” sound the enthusiast community is always chasing. By now, we would’ve thought that this level of quality would’ve died off, but HyperX has kept up with providing solid stabs and we’re ecstatic to see the company continue on with this positive trend.

Getting two layers of adjustable feet here and a USB-C connection helps keep the Alloy Origins at the front of our minds when thinking of keyboard recommendations. Allowing the user to adjust their type angle is a must and the fact that some boards don’t ship with this feature is borderline laughable. The same can be said for not having a USB-C connection, which HyperX has adopted as a staple of their keyboard line. Incorporating these two features gives HyperX an edge over some of the other big-name competitors and ensures HyperX a place at the table heading into 2020.

If there’s one thing HyperX has on lock, it’s the company’s keyboard game. Now we can safely back its proprietary switch game as well.

HyperX’s Aqua switches have a unique feel to them in the sense that the hump is a bit more subdued than a standard Cherry or Gateron Brown. The switch is still decidedly tactile but it never lets up on the level of smoothness. Instead of feeling like you have to get past the hump with each keystroke, it feels as though the hump is rolling with you. This is a finite detail that many users are likely to not notice if they have no prior experience with tactile switches. I tend to lean toward Gateron Browns for personal use but these have me wishing they were sold separately so I could do a build with them on my own.

Looking on HyperX’s website, users can find comparisons of each proprietary switch and its competitors. What’s interesting is just how finite the differences are between the Aqua and the Brown style of switch. The Aqua switches have an actuation point of 1.8 millimeters while Cherry Browns clock at two millimeters. While this extremely slim margin of difference most likely contributes to Aquas having a different feel, we ultimately feel that Aquas are manufactured with a higher quality standard than other mainstream switches like Cherry and Gateron. Given that HyperX switches are only used in HpyerX boards, there may be a higher level of quality control. That’s unconfirmed but this seems like a logical reason for why the Aqua switches feel widely superior to their inspiration.

The only point of frustration we’ve ever experienced while using a HyperX keyboard is due to the Ngenuity software. While the software has recently undergone an update that helps with its reliability, we experienced a good deal of pushback from the software while trying to tool around with the RGB lighting. We found that this was actually not in reaction to the keyboard but the presence of another HyperX peripheral. Once we unplugged the other peripheral, Ngenuity started behaving itself. It’s more food for thought for those who value customization. If Ngenuity is behaving itself, then users can easily take advantage of the three onboard lighting profiles that are accessible with the press of a button.

Much like the other variations of the HyperX Alloy Origins keyboards, the Aqua variant exudes quality and performance. This keyboard leaves the user wanting nothing and boasts all of the creature comforts of a modern keyboard. USB-C and adjustable feet help HyperX keep an edge in a crowded market, and while the company does many things well, it arguably does keyboards the best.

Fans of HyperX will be at home with this near-perfectly constructed keyboard and the inclusion of these Aqua switches gives users a unique experience that can’t be replicated with Gateron or Cherry Browns. As HyperX continues to flex its muscle when it comes to keyboards, we’re excited to see what the company has in store for the rest of 2020.