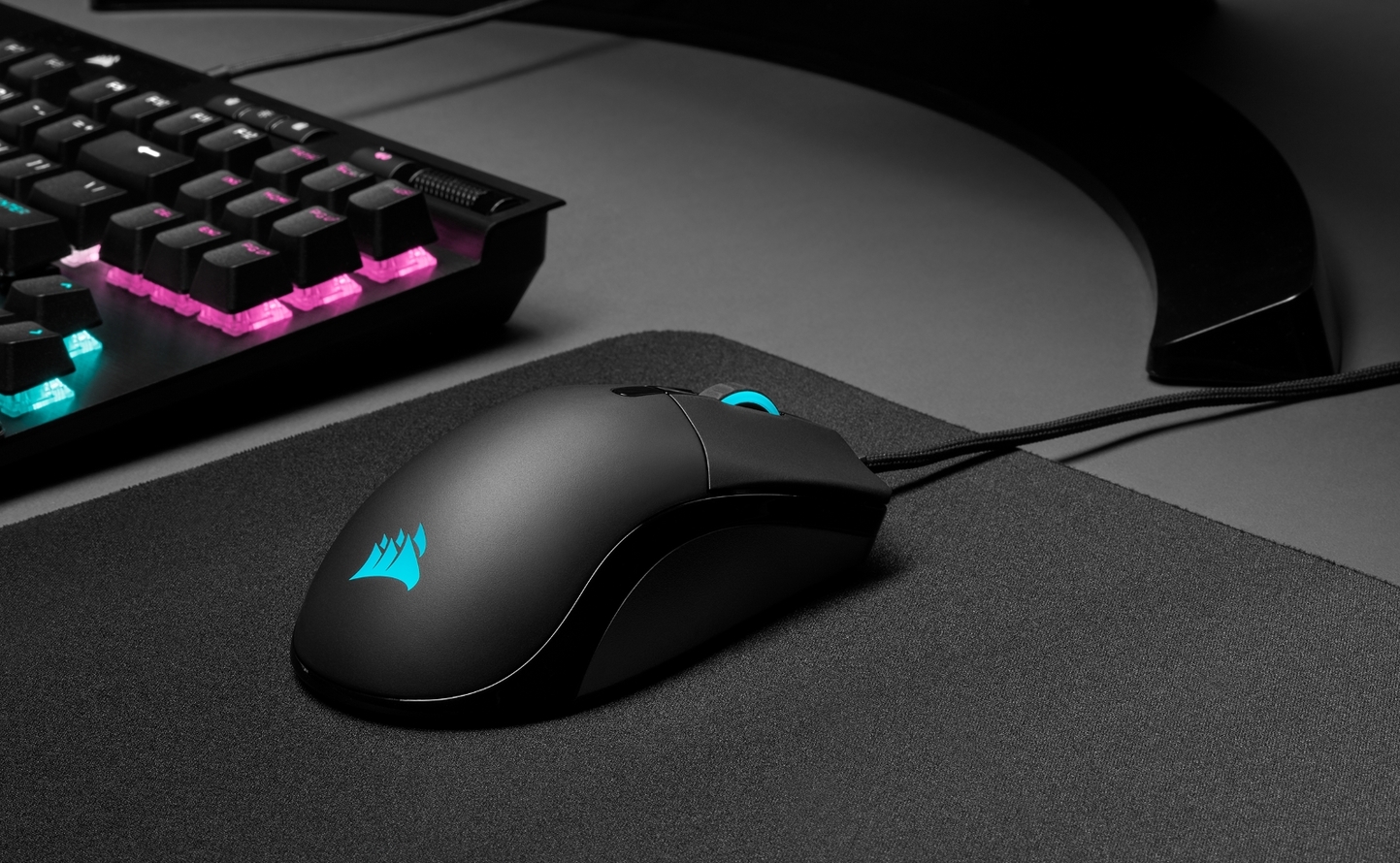 Corsair is going all-in on 8,000Hz peripherals in an attempt to provide esports athletes with the fastest tools in the trade. The brand released its first 8,000Hz keyboard with the K65 Mini and is now applying that formula to its gaming mice. Corsair’s Sabre RGB Pro Champion Series mouse is a clear-cut winner, but not because of its 8,000Hz polling rate capability.

It wasn’t long ago that gaming peripheral companies were at war to provide gamers with the lightest mouse possible. With weight all but eliminated as a competitive disadvantage, brands are shifting their focus to polling rate speeds. Razer’s Viper 8KHz is one of the first 8,000Hz gaming mice, but its advantages are difficult to notice. The same goes for Corsair’s Sabre RGB Pro Champion Series, but the updated Sabre vies for attention in other more successful ways.

Corsair’s Sabre RGB Pro is a lightweight, right-handed ergonomic gaming mouse with a minimalist design that succeeds thanks to its updated DeathAdder-like shape and competitive pricing.

There’s nothing flashy about Sabre’s looks, but it does have a few thoughtful design elements that feel more in line with modern gaming mice.

Most of Corsair’s gaming mice have an aggressive and overstated aesthetic. Some of these designs are outdated if you look at competitors like Logitech and Razer. The previous iteration of the Sabre uses an intensely angular design with some added RGB flair at the front of the mouse. It just doesn’t fit in with today’s competitive gaming mice.

Corsair ditched the original Sabre RGB’s aggressive design elements and ran with a sleek matte black design for the Champion Series. The glossy black strip lining the sides and back of the mouse doesn’t provide any additional grip or functionality, but it’s the only flair to the Sabre’s design aside from the RGB scroll wheel and logo. Adding DPI indicator lights below the left mouse button also provides gamers with a feature that isn’t seen on other lightweight gaming mice.

The Sabre’s shape closely resembles the DeathAdder V2 but is far more comfortable for palm and claw grip users in some cases.

For reference, our reviewer’s right hand measures 7.7 inches (19.5cm) in length and 4.1 inches (10.4cm) in width, categorizing their hand within the medium to large range. Both the DeathAdder V2 and Sabre RGB Pro Champion Series fit their palm comfortably, but the minor differences in the hump location and steepness of the slope make the Sabre a more comfortable option for palm grip users. Claw grip users with medium-size hands will likely find the Sabre to be slightly more comfortable than the DeathAdder V2 as well.

Corsair’s Sabre RGB Pro comes loaded with a PixArt PMW3392 optical sensor that pushes up to 18,000 DPI with a tracking speed of 450 IPS. Mouse DPI capability is starting to fall by the wayside in terms of key features, but the Sabre RGB Pro still hits under Razer’s Focus+ optical sensor that clocks up to 20,000 DPI and 650 IPS tracking speed. The sensor alone isn’t what makes this mouse so interesting, however.

Our reviewer used a 360Hz monitor, an RTX 3080, and an i7-9700K to review both the Sabre RGB Pro and the Razer Viper 8KHz. Both of these mice are top-notch in terms of how they handle titles like Overwatch and Rainbow Six Siege. But beyond a slightly smoother tracking experience, the difference is negligible or, at worst, a placebo effect. Similar to the Razer Viper 8KHz, the Sabre RGB Pro feels like it’s waiting on a future that isn’t quite here yet.

Because our reviewer didn’t notice too much of a difference using a sturdy setup, it’s hard to recommend this mouse solely based on its 8,000Hz polling capabilities. Even when using some of the best hardware out there, the differences feel very slight. Given the astronomical cost of high-end monitors and the scarcity of GPUs, 8,000Hz polling mice are a bit ahead of the curve. More importantly, you’ll also need a capable CPU to run the Sabre RGB Pro at its full potential since just moving the mouse in a circle will spike your CPU usage more than average.

One interesting thing to note about the Sabre’s sensor is that it failed to perform on a slightly more weathered mouse surface. Our reviewer also used the Razer Viper 8KHz on the same surface and experienced no issues. It was an odd issue to run into, considering the sensor wasn’t dirty at all. After flipping the mouse pad to a less-traveled corner, the Sabre RGB Pro performed regularly.

Hyper-polling products aim to give competitive players the speed and immediacy of information needed to succeed, so going with a traditional mechanical mouse switch feels like a misplay to an extent.

Corsair’s choice to use Omron mouse switches instead of developing its own optical mouse switches looks a little off when comparing the Sabre to the Razer 8KHz. If we look at something like Razer’s optical mouse switch that eliminates debounce delay and offers a .2-millimeter actuation point, the benefits seem clear. But both of these mice felt the same in terms of overall performance. There didn’t seem to be much of a difference either way, which raises the question of whether a negligible performance bump justifies the higher CPU usage that accompanies 8,000Hz peripherals.

Another issue our reviewer has with the mouse buttons on the Sabre RGB Champion Series is the wobble in the mouse one and two buttons. There isn’t any pre-travel thanks to Corsair’s Quickstrike design, but there’s a lot of horizontal movement that creates a sense of instability. Having a bit of wobble isn’t a huge issue in the heat of the moment, but the noise doesn’t instill much confidence in build quality and seems like an odd oversight considering this mouse should offer a tight esports-worthy performance. Over many months of use, this design flaw could become a real nuisance that hinders performance.

Two smaller features of the Sabre RGB Pro Champion Series stand out thanks to its 74-gram weight. The first is the cable and the second is the mouse feet. Both of these features look rough around the edges at first glance, but they’re actually top-tier when combined with the lightweight design of the mouse.

Every company has its own answer to the paracord mouse cable. Paracord cables are the new standard on most competitive gaming mice. While there are plenty of companies that make quality paracord cables that reduce drag, Corsair has one of the more pliable options out there. Make no mistake, though, this cable is a little ugly. It’s loose and the material tends to bunch up if it gets snagged. However, this is easily the best paracord from a major peripheral manufacturer, especially since Razer’s Speedflex cable packed on some thickness to accommodate the Focus+ sensor. Combined with the Sabre’s 74-gram weight, Corsair’s cable helps this mouse feel more like a wireless mouse than any other lightweight option.

The 100-percent PTFE mouse feet don’t make a good first impression because of their small size but they proved our reviewer wrong. Despite the tiny feet in the four corners of the mouse, these glide far better than a DeathAdder V2. Even after hours of use, the Sabre RGB Pro feels better than a newly opened DeathAdder in terms of glide. Our reviewer would like to see Corsair use larger feet in the future or include a larger set in the box like Glorious does with their gaming mice.

Corsair’s proprietary software looks a lot better than it did a couple of years ago. Its new facelift makes the interface easy to navigate and doesn’t cause much confusion. Our reviewer had issues with the software recognizing the K70 TKL Champion Series, but it picked up the Sabre RGB Pro Champion Series right away.

Customizing the six programmable buttons on the Sabre RGB Pro Champion Series is easy, and there isn’t much to say about the lighting effects. The main thing to look out for when customizing lighting in iCUE is the difference between Lighting Effects and Hardware Lighting. The former adjusts lighting when iCUE is active, and the latter is active when iCUE is closed. Aside from that, there’s nothing to customizing the Sabre RGB Pro Champion Series.

As with any 8,000Hz polling rate peripheral, you’ll need to have a beefy rig if you want the minor advantages the Sabre RGB Pro Champion Series’ 8,000Hz hyper-polling provides. Like the Razer Viper 8KHz, Corsair’s Sabre RGB Pro Champion Series mouse feels like it’s ahead of the curve. The advantages of Corsair’s AXON hyper-polling are minuscule and can even feel like a placebo effect.

Competitive pricing is really what makes this mouse an interesting option when positioned against Razer’s 8,000Hz alternative. Corsair’s Sabre RGB Pro Champion Series is $20 cheaper than the Viper 8KHz. This mouse’s $10 premium over its predecessor covers more than just an upgraded sensor. It covers a completely new mouse design from Corsair that brings the Sabre into the modern era of competitive gaming mice. If you’re a right-handed gamer that needs some extra support while gaming, this is a great choice that boasts all of the modern mouse features at a fair price from a reliable company.