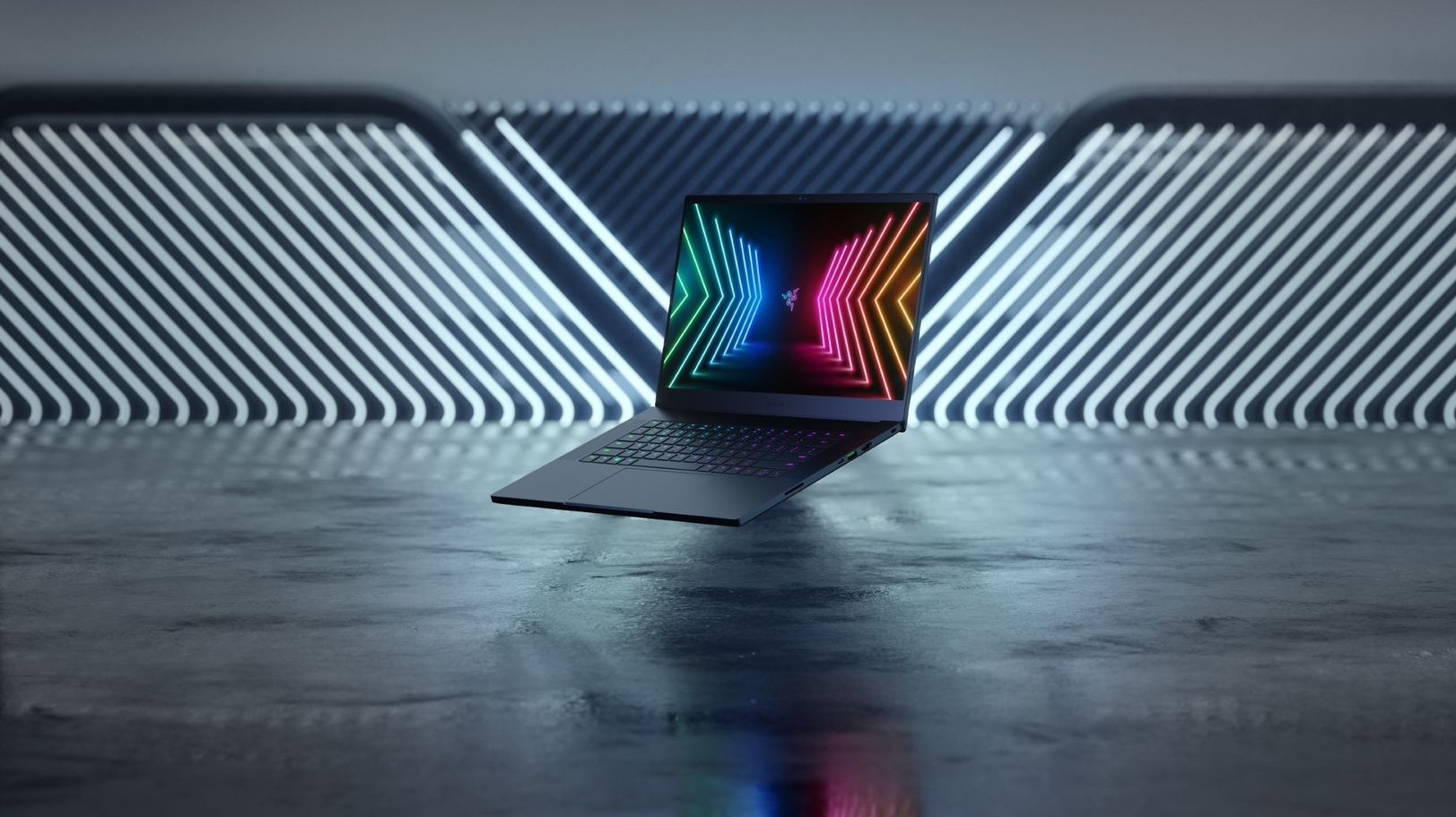 Update April 20 2:20pm CT: The display issue discussed in this review has been identified and patched by Razer. The issue only affects first batch models. No RMA is needed and the issue can be resolved through Razer support. The article and headline have been updated to reflect this information.

Razer revealed its newest Blade gaming laptop lineup at CES 2021. The announcement came in January and gained a fair amount of attention due to the updated line’s inclusion of 30 series GPUs and 360Hz displays.

Razer makes some of the snazziest looking gaming laptops around. Year after year, the company releases updated laptops that see significant leaps in specs without too much of an increase in size or aesthetic sacrifices. The Blade 15 Advanced follows this tradition and provides gamers with a slim, powerful laptop. But this time around, the once tried-and-true Razer Blade design is showing signs of age.

The Blade line of gaming laptops previously provided premium options for the on-the-go gamer. Along with a premium feel comes a premium price tag. While pricing has been an issue in the past, the newest iteration of the Razer Blade 15 Advanced has a price tag that matches with the competition.

Love the logo but…

There’s nothing quite like unboxing a Blade laptop, and the Blade 15 Advanced is no exception. The sturdiness of this laptop exudes quality the moment you hold it in your hands thanks to the expected return of Razer’s unibody design.

Razer’s tried-and-true anodized aluminum unibody design continues to impress several iterations later. But one major pitfall of this finish is that it collects fingerprints and oil like no other. With Asus’ new fingerprint-resistant finishes, Razer’s design is starting to show some signs of age.

A massive win for the Razer Blade Stealth 13 was its near-flawless aesthetics. While the Blade 15 Advanced shares a similar design language, it also removes one sleek design element of the Stealth 13. Razer’s black and green color scheme is recognizable from a mile away. An easily identifiable design is excellent for brand recognition but not so much for blending in at your remote work location of choice. Instead of carrying on with the Stealth 13’s subdued, all-black snake logo on the top cover, Razer went with its backlit green snake logo.

The choice to not carry over the all-black logo isn’t a deal-breaker, but it allowed the Stealth 13 to blend in where the Blade 15 Advanced cannot. The inclusion of the glowing green snake logo falls back into the typical gaming RGB trend that’s getting a little tired.

The Blade 15 Advanced is pricey, but its specs help balance out the blow to your bank account. Razer sent out a model with an Nvidia RTX 3070 8GB laptop GPU accompanied by an eight-core, 16-thread Intel i7-10875H processor with a base clock of 2.3GHz that boosts up to 5.15GHz. This model comes loaded with 16GB DDR4 2933MHz memory and a 1TB SSD. These specs put it on par with other 300Hz gaming laptop options like Alienware’s 17-inch m17 R4, though you get a few more connectivity options with the Blade 15 Advanced and the processor here is a bit behind compared to what AMD is churning out.

Aside from the internals, the Blade 15 Advanced features a decent selection of connectivity options, as you’d expect at this price point. Ports featured on our reviewer’s model include one Thunderbolt 3, three USB 3.2, an SD card reader, a headphone jack, and an HDMI 2.1 output that pushes up to 8K at 60Hz or 4K at 120Hz. Our reviewer would take an ethernet port over an SD card reader, but that’s merely a personal preference since adapters for both SD card readers and ethernet are readily available on the cheap. Razer’s Blade 15 Advanced also features Wi-Fi 6E and Bluetooth 5 capability.

The 80Whr battery won’t get you far if you plan on gaming on battery alone. Razer included Nvidia’s Optimus technology that uses both the integrated and dedicated GPUs to optimize performance and battery life. Optimus will be your go-to mode if you’re not near a power supply—though, using Optimus will lock you at 60Hz. Our reviewer got an hour and a half of Overwatch on the battery at 360Hz in Performance mode, which is more than they expected.

As you might expect, this laptop dumps massive amounts of heat and produces quite a bit of noise with some interestingly annoying characteristics. Despite producing a fair amount of heat, the keyboard never gets too warm to cause any discomfort like it would on something like the Asus ROG Zephyrus G14. Instead, you’ll notice the heat on your palms more than anywhere else.

The sound of the Blade 15 Advanced is interestingly annoying. On more than one occasion, our reviewer noticed a more high-pitched whining coming from the fans. Despite the odd noise, everything looked to be running just fine, with temperatures staying in acceptable ranges and performance feeling stable at the time. If you’re in Performance mode, you can expect to hear the fans going non-stop, but the high-pitched whining comes into play when you try to push close to 300fps with graphics set to High in a game like Overwatch.

Previously, our reviewer’s major concern about the Blade 15 Advanced’s performance was the noticeable display issues while gaming. Playing any game in Performance mode with graphics set to High and a frame limit of 300fps caused some intense display issues that have since been remedied. Not only did the display cut out consistently, but black frames seemed to be inserted, which was cause for concern.

Our reviewer has been in touch with Razer about this issue and it’s contained to the first batch of Razer Blade 15 Advanced models with a 360Hz display. If you run into this issue, all you need to do is contact Razer’s support team and they’ll guide you through a brief update process. After this update, the display will run normally.

With the display issues resolved, our reviewer can confidently say the 360Hz display is a dream. Ghosting isn’t an issue, and the response time feels just as snappy as a stand-alone 360Hz monitor.

The Blade 15 Advanced can hit some decent frames during benchmarking. Rainbow Six Siege pulled an average of 285 frames per second in Ultra with peaks and valleys of 338fps and 236fps, respectively. These framerates are a solid pull for a game like Siege that features dynamic destruction. Meanwhile, Red Dead Redemption 2 churned out an average of 85fps with highs and lows of 46fps and 116fps using the Balanced preset.

Our reviewer noticed an audible click noise during the Red Dead Redemption benchmark. It only occurred once, and our reviewer ran several to see if they could replicate the noise, this time with higher graphics settings. Sure enough, the single audible click returned. It sounded like the heat may have warped something inside the laptop, but our reviewer can’t be sure.

At first, testing the Blade 15 Advanced proved to be a mixed bag, but the experience was drastically different after the display fix. Rainbow Six Siege and Overwatch felt particularly comfortable. The 15-inch panel is just large enough to prevent squinting or leaning closer to the display to identify enemies.

Laptop keyboards are hard to nail down, and many end up feeling too rubbery or spongey. Razer’s Blade keyboards have always excelled in this department by providing gamers with a snappy and sturdy keyboard, and the Blade 15 Advanced is no different. Along with a premium keyboard comes Razer’s Chroma lighting.

Razer’s trackpad returns to an expected degree of success. Between the responsive bounce of the keyboard and the tactility of the trackpad, the Blade 15 Advanced feels like a premium product no matter what task you’re accomplishing.

Our reviewer’s Blade 15 Advanced model features a 720p webcam compatible with Windows Hello. Having a webcam has been a necessity for the past year and feels obligatory for manufacturers to include. But not all webcams are up to scratch, and the Blade 15 Advanced’s webcam feels a bit darker out of the box than our reviewer would have liked.

The sound quality here is underwhelming as well. There’s a slight tinny quality to the built-in speakers that sounds subpar to other options on the market. Having an Asus Zephyrus G14 on hand didn’t help the Blade 15 Advanced’s case either. Putting the two laptops next to each other and comparing the sound made a convincing case that if Razer needs to upgrade anything going forward, it’s the speakers.

Pricing and other pitfalls

Razer’s newest portable monster is on the pricey side, but that comes with the territory of adopting the latest tech. Not only are you paying for a 30 series GPU, you’re also shelling out for a 360Hz display. Considering the astronomical price of a 360Hz monitor outside of this package, the pricing of the Blade 15 Advanced makes much more sense than it did on a product like the Blade Stealth 13.

The Blade 15 Advanced is another instance of Razer beating most competitors to the punch. It’s the only 15-inch laptop with a 360Hz display that is readily available. Asus, MSI, and Alienware all have 15-inch 300Hz models that are similarly specced and feature their own unique designs. MSI’s GS66 Stealth is the next best thing if you’re a fan of Razer’s design but want to save a couple of hundred dollars at the expense of some connectivity ports.

There’s no doubt the Blade 15 Advanced has some killer features. It boasts an Nvidia RTX 3070 laptop GPU and a 360Hz display. But some design elements feel a little played out. With competitors like MSI zeroing in on a similar design, Razer needs to shake things up going forward.

Given the aging design, odd clicking noise during benchmarking, and weak speakers, it’s difficult to recommend this product over a competitor like Asus that is nailing both design and performance thanks to its inclusion of AMD CPUs. Granted, you’ll be paying a bit more by opting for a 360Hz Asus model, but Asus is checking the boxes Razer is missing right now.