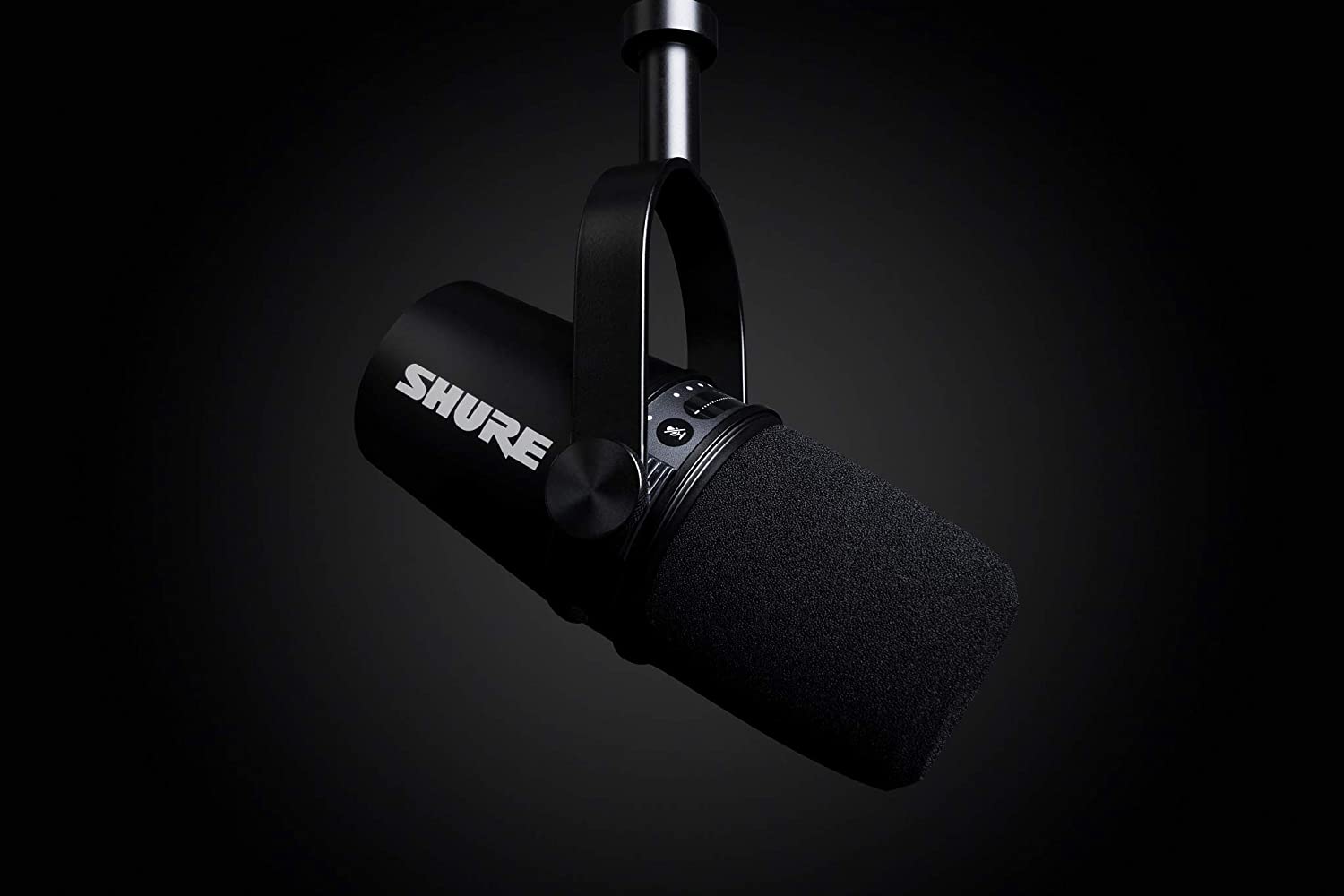 Image by Shure via Amazon

Shure is easily one of the most recognizable audio companies in and outside of streaming. The company’s SM7B is popular among many high-profile players and streamers and has storied roots in recording Michael Jackson’s “Thriller.”

Aimed at podcasters and streamers, MV7 is Shure’s newest release. The MV7 is inspired by the SM7B but retains a relatively affordable price tag compared to its older sibling. Being a more budget-friendly microphone is a win at any rate, but the MV7’s performance does the heavy lifting by providing plenty of long-term value into which beginners can grow.

The most noticeable aspect of the Shure MV7 out of the box is its dual USB and XLR connections, along with a 3.5-millimeter headphone jack. Both connections can be used at the same time. This might seem like a “split-the-difference” approach, but it informs much of the MV7’s value.

While not every user will need both connections right away, it leaves room for expansion and growth. Streamers who don’t have an audio interface now and are more comfortable with a USB connection might find themselves in the market for one in the future, and this microphone will easily make the transition to the new setup.

The MV7 is a dynamic mic that uses a directional cardioid polar pattern to pick up sound from one direction. This pattern helps keep unwanted background noise out of the mix so the user’s voice stays even and in focus. While some podcast and streaming-oriented microphones are keen on providing a wide array of features and polar patterns to suit many needs, the opposite is true for the MV7, and it’s all the better for it.

Shure matches the MV7’s singular focus by providing users with a small but useful amount of utility. Included in the box is a flimsy windscreen that still gets the job done, a ⅝-inch adapter, a USB-A to USB-C cable, a USB-A to Micro-USB cable, and a host of touch controls. The windscreen and adapter are a given considering the audience and price, but the touch panel is where things get interesting.

Located on the mic is a touch panel interface for users to adjust their mic and headphone levels, which are denoted as green and orange, respectively. This panel also houses the mute toggle and monitor toggle.

Mute is self-explanatory, while the monitor toggle provides a bit more freedom in how users dial in their sound. The monitor toggle is used to jump between adjusting mic and headphone volume. If held for two seconds, the touch panel turns to a mix of both. Sliding left on the panel kicks up the mic volume while sliding to the right cranks the headphones, providing an easy way to find the right mix. Holding the monitor and mute toggles together locks the controls into place, which may come in handy for some users but rarely came into play during testing.

These touch controls are inarguably useful but can be a pain if you’re trying to adjust levels in the heat of the moment. There were several occasions where reaching for the controls while gaming felt awkward and ineffective. While there are always some growing pains to iron out, they lasted a bit longer than with non-touch-based mic controls. Everyone’s preferences are different, and while these controls add value and functionality, they don’t feel comfortable in most circumstances.

Shure’s Motiv app is an intuitive tool for tuning the MV7 and assists in customizing the mic to suit the user’s voice. A variety of settings are adjustable through the app, including monitor mix, mic position, tone, LED behavior, EQ modes, limiter settings, and compressor settings. Having access to these controls through a simple and easy-to-use interface should help make the MV7 a less-intimidating investment for beginners.

The EQ controls are one of the app’s biggest draws. Users can switch between flat, high-pass, presence boost, and high-pass presence boost. Each EQ can limit or boost certain frequencies. This feature helps tune the mic to the user’s needs and can help counteract issues like the proximity effect commonly found in directional microphones or add to the overall clarity of deeper tones.

Having the EQ presets is helpful, but the tone control on the MV7 feels like a better place to start tinkering. Taking advantage of the Natural, Bright, and Dark presets is the easiest way to adjust for voice type. Dark provides a bit more bass, Natural produces a warmer sound but is closer to reality, and Bright provides a crisp tone that can border on sounding tinny at times. All settings can be saved to a profile in the Motiv app.

Auto Level is also an option for users who just want to get up and running as fast as possible. Tapping the Near or Far options takes care of nearly everything, and all that is needed on the user’s end is to read the recommended distance and adjust accordingly.

Being related to the famed SM7B leaves the MV7 with some large shoes to fill, but the MV7 succeeds in living up to its influence in more ways than one. While the Shure name can be somewhat intimidating to newcomers, the MV7 provides an accessible plug-and-play experience like no other—but not without issue.

Using a USB-A connection proved to be a better experience than using a USB-C connection. Both connection types sounded similar, with vocals coming in sounding natural but having a bit more bass than expected. The difference is in the USB-C connection’s low hum, which is exacerbated by any increase in gain. Not being able to increase gain makes it difficult to use the MV7 farther away. Trying a USB-A port next to the USB-C port did not yield the same result. It’s likely the USB-C port is to blame, but it’s important to note for those banking on that connection type.

Aside from the humming on the USB-C connection, the MV7 provided stellar audio with minimal adjustment. Using the mic in the Near Auto Level setting at 2 inches away on Natural yielded the best results. Likewise, using the Far Auto Level setting at 6 inches away produced the best results, though there was some audible noise from cranking the gain up to accommodate the distance.

The MV7 carries a bit more bass in its natural state. This can brighten up with a number of settings in the app, and after all the time spent making adjustments and dialing settings in, the out-of-the-box sound provided the clearest and most reliable audio. That’s not a knock on the Motiv software—there’s real value baked in there—but it highlights that the MV7 holds its own straight out of the box in this particular instance.

Without a leg (or arm) to stand on

Despite being a pricey investment, the Shure MV7 comes with neither a tripod stand nor a boom arm. The absence of a boom arm is acceptable, but the lack of a tripod stand seems like a cut corner. While it’s easy to try to justify the missing stand away by saying the MV7 is a top performer, it still doesn’t feel quite right while opening the box. Shure sells a desk tripod in a Podcaster Kit with the MV7, but the $20 add-on brings this mic just below $300 excluding taxes.

If you’re looking for a high-quality microphone with plenty of customization, the Shure MV7 might serve you well despite a few baked-in flaws. The initial investment is steep and closes in on $300. Omitting a stand in the base package doesn’t play well against the price tag.

Despite the misstep, the MV7 presents a ton of value. The MV7 features both XLR and USB connections and a host of customization features to support users on their podcasting and streaming journey. With plenty of adjustments available through the Shure Motiv app, users are free to dial in their settings as much or as little as needed. On top of the easy customization, the XLR and USB connections ensure this mic transitions from setup to setup with ease.

The MV7 showcases Shure doing what it does best: high quality, studio-grade audio. Whether it’s the out-of-the-box sound or a more tailored sound, Shure’s MV7 is a winner. The only issue is if buyers can make the initial investment work.