Today, AMD gave fans a first look at the successor to its FidelityFX Super Resolution (FSR) image upscaling tech, FSR 2.0. The announcement comes just ahead of its scheduled GDC 2022 session and follows a major leak.

AMD is looking to make a leap in performance with FSR 2.0. In an announcement video, the company highlighted that FSR 2.0 uses a temporal upscaling algorithm that takes data from previous frames to create images of much greater quality than the original FSR is capable of putting out. The original FSR uses a spatial image upscaling technology that uses data from the current frame to render the upscaled image. AMD’s first outing with FSR is also dependent on in-game anti-aliasing whereas FSR 2.0 has integrated anti-aliasing tech to increase image quality.

“With this upgrade, FSR 2.0 delivers significantly higher image quality than FSR at all quality mode presets and screen resolutions,” said Azor in the announcement video.

AMD did not share many hardware-specific compatibility notes, but it did reveal that it would be compatible with competitor hardware like the previous version of FSR. This is thanks in part to the lack of dedicated machine learning featured in Nvidia’s DLSS 2.0. On the development end, FSR 2.0 will remain opensource for developers to implement into their games. 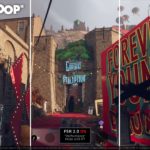 During the video announcement, AMD also shared a first look at FSR 2.0 running in DEATHLOOP. The demo was brief, but there will likely be more to come at the upcoming Game Developers Conference.

The newest iteration of FSR is said to be a giant leap in performance and image quality. AMD only launched FSR in June 2021, which is a mere nine months out of the oven. Now, the company is aiming for a Q2 2022 release window. Coming out at the tail end of Q2 would prime FSR 2.0 for release just a year after the original.