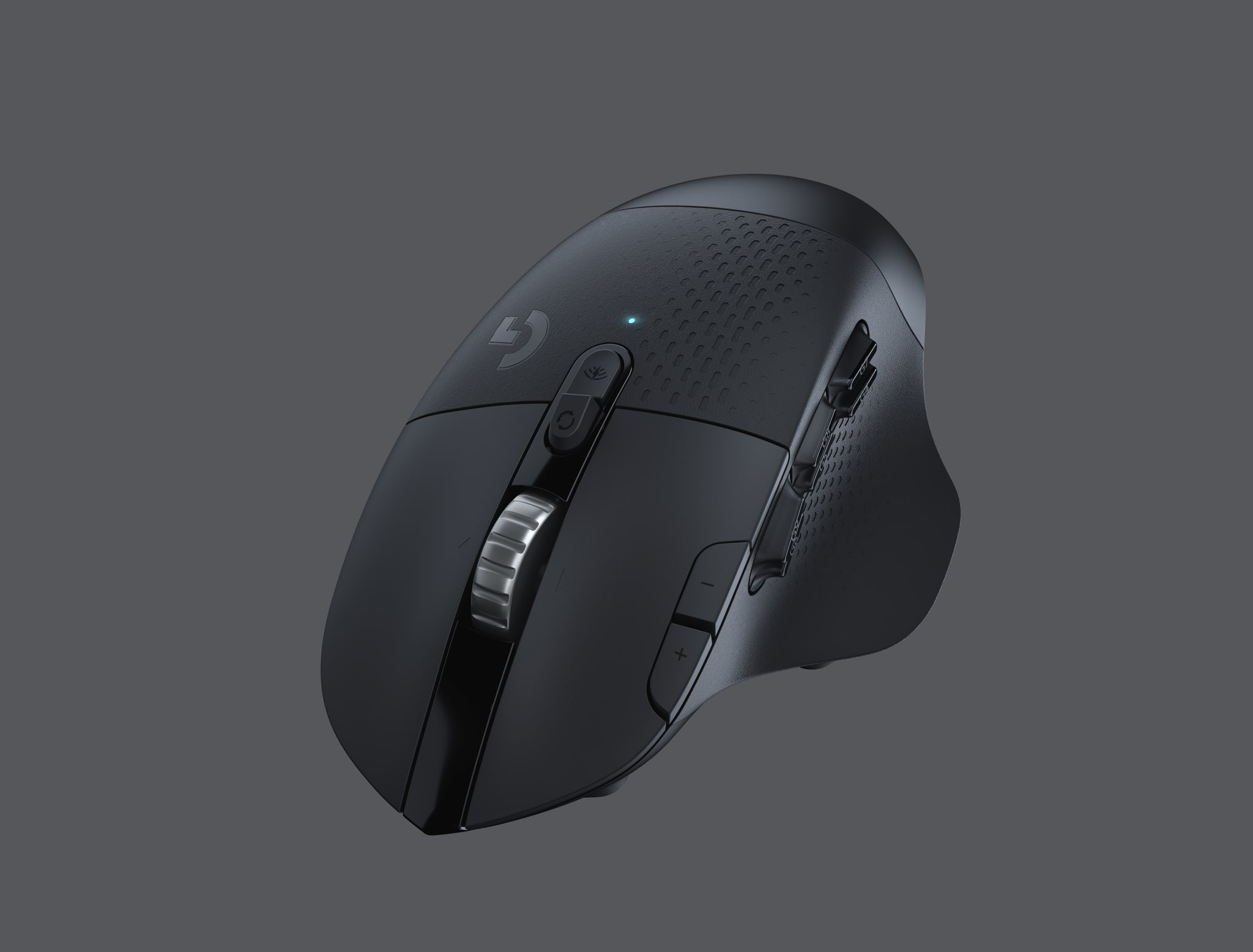 Logitech has been heavily combating the stigma surrounding wireless peripherals this past year and the G604 is another great argument for wireless gaming mice. Fans of the G602 will find themselves at home with this versatile ghost of gaming mice past.

Users will be able to peg the G604 Lightspeed as a Logitech gaming mouse straight away, which is a good thing depending on who you ask. The G604 takes on the familiar shape and layout of the G602, but with a more modern and minimalistic aesthetic. Logitech gaming mice tend to have a very specific look to them that falls somewhere between Blade Runner and Office Space.

The shape and lines of the G604 look sci-fi, while the matte black coating makes it look at home on any desk or in any office. It’s a pleasing aesthetic that helps define a battlestation. Looks aren’t everything, though, and luckily for Logitech fans, the company backs the aesthetics with familiar high-performance components and a great fit. There is one exception, however.

The G604 uses a AA battery instead of a rechargeable one and there’s no option to upgrade. While this may not seem like a big deal, it sticks out like a sore thumb when comparing it to other mice nearing or just above the $99.99 price range. It also just seems a bit strange to use a AA battery here considering that Logitech has a wireless ecosystem that works extremely well, especially when the Powerplay charging system is the foundation.

But the G604 makes the most out of its included AA battery when using the mouse. Logitech clocked the battery life of the AA battery at 240 hours when using the Lightspeed connection and 5.5 months when using the Bluetooth connection. You’ll get a lot of mileage out of the one battery, but it seems out of place on a high-performance mouse.

Aside from not having a rechargeable battery, the internals of the G604 are the staple components that Logitech fans have come to know and love. Of course, the Lightspeed tech provides one of the cleanest wireless gaming experiences out there. But when coupled with the HERO 16K sensor, there doesn’t seem to be a reason to return to a wired gaming mouse of this nature.

As far as fit is concerned, the G604 abides by the same logic as the G502. While we generally enjoy the shape and fit of Logitech mice, the G604 won’t be for everyone. Logitech has offerings in other shapes and sizes, but users who are looking for a solid performer in the battle royale, MMO, or MOBA spaces may be out of luck if the fit isn’t right.

In terms of customization, this is going to take a bit of time if the user wants to dial in on all 15 programmable buttons on the G604. It’s not that the process is difficult as much as it’s just the nature of the beast when it comes to highly-flexible mice like this one. The software will likely be difficult to come to grips with for beginners due to the sheer amount of options, but as we said in our review of the G915, it’s learnable in about an hour or so for newcomers.

The flexibility of the G604 is what really shines. We don’t often hear the words “battle royale” mouse in advertisements or marketing material, but in the case of the G604, this is where the mouse begins to feel more versatile. Using the G604 in a battle royale environment was surprisingly fun. It’s clear that this mouse is intended for a specific audience, but it performs well in other genres as well. The six-pack of thumb buttons are easy to navigate and are further accentuated by the shape of the mouse, which aids it in transitioning between genres.

We spent some time with the G604 in Call of Duty Modern Warfare, and while our flicks felt like they dragged ever so slightly, the G604 held up nicely. It was a bit surprising how versatile the G604 turned out to be during our testing. We never felt awkward in any scenario or like we needed to switch mice, which is something that obviously can’t be said for every style of mouse.

The inclusion of Bluetooth is, again, not for everybody. Seeing Bluetooth connections on gaming peripherals is a bit odd. There’s a noticeable delay, so there’s really no incentive to use Bluetooth over Lightspeed. We understand that this feature is included so that users can easily switch between machines, but it feels off on a gaming mouse. We enjoyed the Bluetooth when switching from our desktop to laptop for on-the-go functionality, but it isn’t a feature that’s extremely necessary or desired in some cases.

Some other solid features include the hyper-fast scroll wheel, great mouse feet, onboard dongle storage, and intuitively-placed DPI controls. The hyper-fast scroll wheel is one of those features that we always miss when we’re using non-Logitech mice. It’s a seemingly unimportant feature when it comes to gaming but it’s sorely missed when not in use. The mouse feet glide well and showcase the well-balanced nature of the G604. Its weight seems evenly distributed, which is always a plus. Having a place to store the wireless dongle is another feature that’s pretty common these days, but some mice don’t bother to carve out the extra space. Finally, the G604 follows the design of previous Logitech mice. Having the DPI buttons placed on the far edge of the left mouse button is a creature comfort at this point.

If you’re in the market for something that won’t break the bank but will still serve as a solid investment, then the G604 is a strong bet. It would be nice to see a rechargeable option in the future and maybe a version without Bluetooth since it isn’t a viable gaming connection. At the end of our time with the G604, we can confidently say that it’s a solid performer that boasts a high level of versatility, even if there were some seemingly questionable choices made with the battery and Bluetooth.