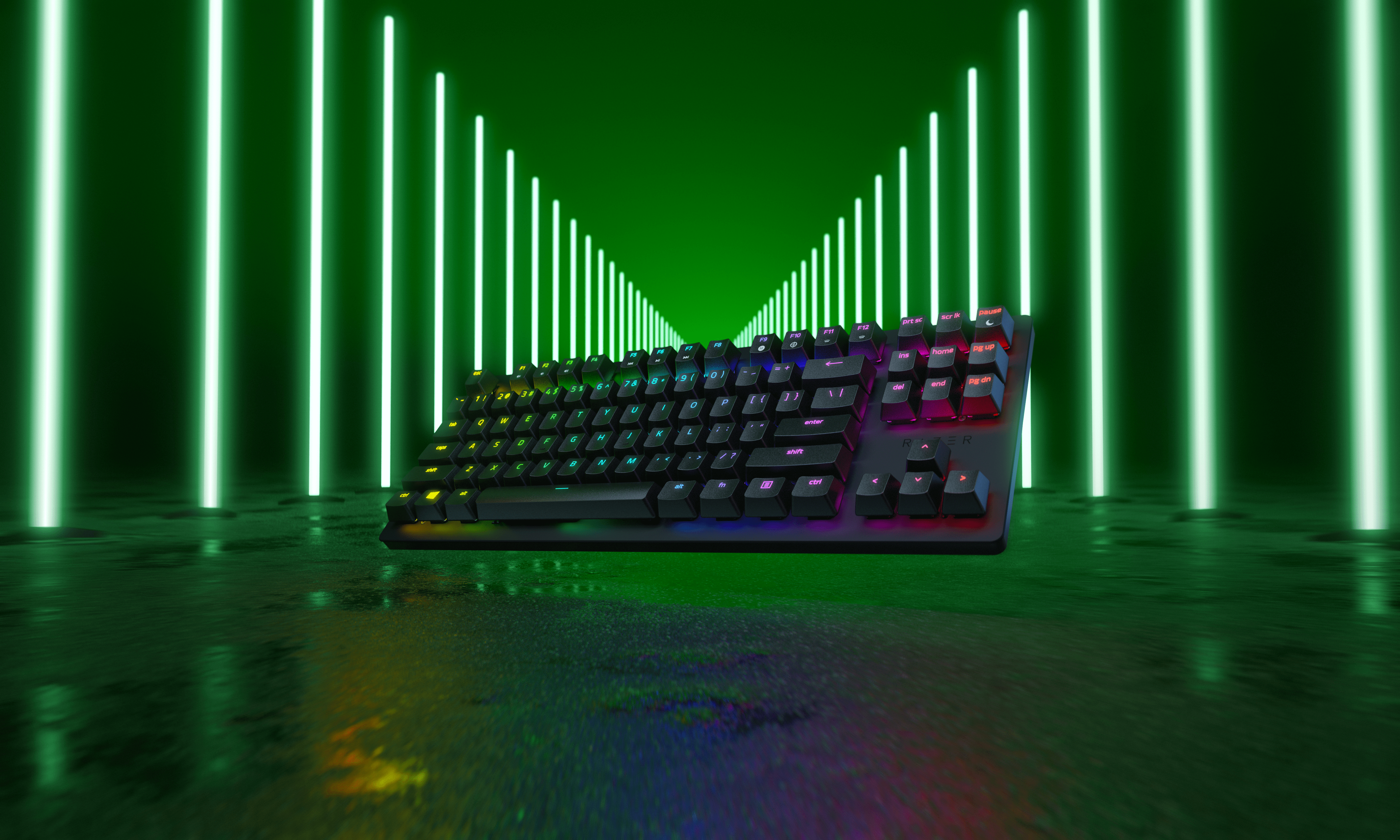 Razer has upped the ante a considerable amount in 2019 and continues to push into spaces that are seemingly unexplored by mainstream gaming peripheral giants. While other companies have caught on, it seems that Razer is keen on leading the charge—that much is apparent with the Huntsman TE.

Something has shifted in Razer’s design language. When we unboxed the Huntsman TE keyboard for the first time, we were surprised to see that the packaging was louder than the product. Traditionally, Razer products boast a bit more of a “gamery” aesthetic. This isn’t the case with the Huntsman TE. Instead, Razer has gone with a minimalistic approach to the newest board. The matte black finish paired with a light-handed gloss logo above the arrow keys makes for a less cluttered and distortionless design, which fits with who this board is geared toward.

Unlike the Logitech G Pro X keyboard, there’s no wasted space on the Huntsman TE. Both boards are aimed at competitive players who have to live an on-the-go gaming lifestyle. While both boards are compact, the fact that there’s no dead space at the top of the Huntsman TE is a nice touch. This is obviously not a deal-breaker for the Pro X but it’s something to consider when choosing which board better suits your needs since the two are in close competition to each other, despite the Pro X having the bonus of a hot-swappable PCB.

Another design choice that needs to be highlighted is the standard bottom row of keys. This is a massive deal for gamers who crave a bit more customization. As the lines between enthusiast and gaming keyboards continue to blur, this is a feature that heavily appeals to those obsessed with keeping their setup on-theme.

The font blasted on the keycaps is subdued and the keycaps have a great thickness to them due to being Doubleshot PBT. Despite being thicker than most keycaps in this board’s price range, the Huntsman TE is surprisingly light on its feet. Keystrokes feel hyper-responsive and snap back with a vengeance (we’ll get into that more when discussing the switches).

Some other features that we were happy to see were the inclusion of two levels of rubberized feet and the use of a UBS-C connection. At this point, it’s a bit odd when companies decide not to go with UBS-C. The feature is in heavy demand and some PC cases are even shipping with USB-C ports. It’s a “the future is now” scenario where companies are going to adapt and Razer has ensured a seat at the table by adopting USB-C earlier than some.

Moving onto the actual experience, we wish we could show you all of the typos we made while writing this review. The Huntsman TE boasts Razer’s own proprietary optical switches. In most cases, the difference between optical and mechanical is negligible, but Razer’s switches act as hair triggers and actuate with a feather’s touch. This is where things get tricky and are far more subjective than normal. Optical switches aren’t the norm and they’re going to feel differently right off the bat.

Users will undoubtedly notice that the Huntsman TE is hypersensitive. Upon our first time booting up some Modern Warfare, we were surprised that we were strafing left. That’s how sensitive these switches are—even gently resting your fingers above your WASD keys can cause actuation. This all must sound extremely negative but it actually plays into the market for this type of keyboard. These switches demand precision, and while they won’t make you better at video games by any means, they’ll help to train some of the sloppiness out of your movements. It’s definitely divisive but we grew accustomed to it within a matter of hours.

The Huntsman TE is wickedly fast and light on its feet, which is something that doesn’t necessarily aid in a competitive environment but makes the user feel like they might be slower than the board at times. It’s an overall positive in our opinion. There’s absolutely zero delay and it often feels as though the keyboard is ahead of the curve. Combine this with the fact that this board gives us a drastically different gaming experience than any other board—including past optical boards—and Razer has a huge edge in our book.

This is a different experience that has a learning curve to it if you’re coming from a standard mechanical keyboard. While it feels like there’s more resistance here than a Cherry MX Red, it’s somewhat of an illusion. MX Reds are linear and smooth, and while the feel of them offers great glide, the actuation point is actually much higher than that of the Razer opticals on this board. This isn’t fast marketing, Razer optical switches are the real deal. The immediacy of a 1.0 mm actuation point is blindingly fast.

There’s no substitute for a keyboard that fits its user. The Razer Huntsman TE won’t be for everyone and that’s most certainly not a negative. It’s just the same as having a switch preference. We tend to gravitate toward Gateron Brown switches but have found ourselves to be in love with the gaming experience the Huntsman TE provides. It’s fast, demanding, and offers something new to competitive gamers.

The Synapse software is still, you know, software, but it’s kind of the lesser of all the evils at this point. Logitech software is rather deep but is a bit more reliable than HyperX’s NGENUITY software that’s still getting the wobbles out. Razer’s Synapse just feels a bit more direct in broadcasting its capabilities to the user.

The bottom line here is that if you want to shake things up and try something new, the Huntsman TE is a trusty tool provided by a company that’s keen on setting and pursuing industry trends. The speed may take some getting used to but the overall experience was an immensely positive one.

Razer’s 2019 lineup is one of the best on the market and while there’s still plenty more the company can do with the Huntsman TE in future iterations, Razer has proven that it’s committed to pushing the envelope at every turn of 2019 and beyond.