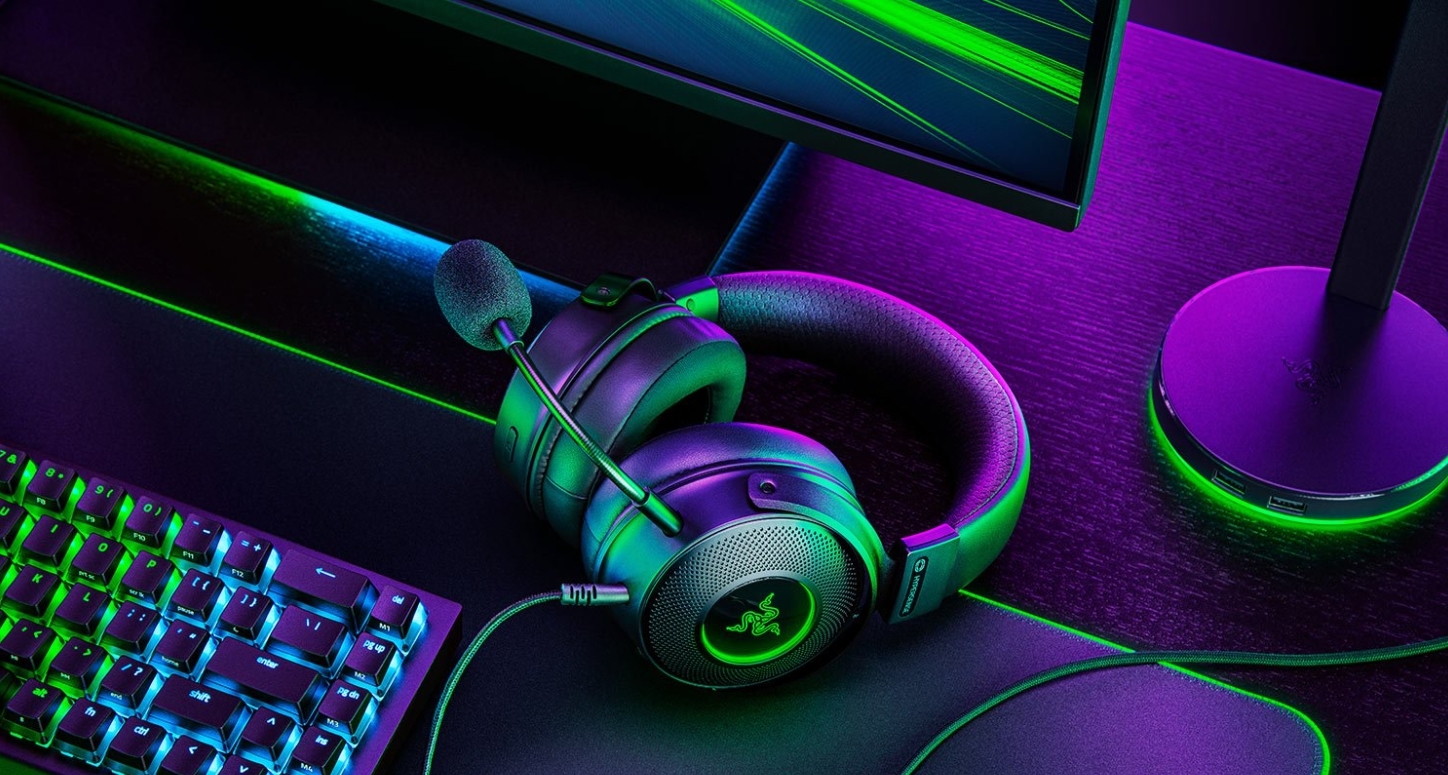 Razer held its second annual RazerCon on Oct. 21. Among the biggest reveals of the digital convention were a new line of desktop components and same-day peripheral releases. Heading the same-day drops are the Kraken V3 and Kraken V3 HyperSense. The Kraken V3 Pro will drop later this year, but fans still have access to one of the more interesting headsets of the year.

The Kraken V3 HyperSense is a worthy upgrade to the Kraken line that improves on comfort while providing reliable in-game audio, even if its main selling point is situational.

As a part of the newest Razer headset lineup, the Kraken V3 HyperSense takes cues from its fellow Razer headsets and crams them into an updated classic. Fans of the brand will recognize several Razer mainstays, including TriForce drivers, HyperSense haptic feedback, and Chroma RGB.

Razer packs the same 50-millimeter TriForce drivers from the Blackshark V2 line into the Kraken V3 HyperSense. These drivers have a frequency range of 20Hz to 20kHz, which is on par with competitors. Many of the top gaming headsets, like the Logitech G Pro X headset, feature the same range.

Handling the input is a detachable HyperClear cardioid microphone that resembles the Blackshark V2’s. The microphone is customizable with the Synapse software to suit a variety of needs. Among the available adjustments are EQ presets, sidetone, and enhancements.

Fans of Razer’s iconic Chroma lighting will get the same level of control over the headset’s aesthetics that they’ve become accustomed to with other Razer products. Instead of covering the majority of the ear cups like the Kraken Ultimate, the V3 HyperSense only features lighting on the logo and the ring that encircles it.

While Chroma is a flashy perk of Razer products, the main draw of the Kraken V3 HyperSense is the HyperSense haptic feedback. Recently seen on the Nari Ultimate headset, HyperSense functions similarly to rumble on a DualShock or Xbox controller. The feature has three settings: low, medium, and high. Players can easily switch between HyperSense settings using the dedicated button on the right ear cup. Even with all of this control, HyperSense may not matter to many players.

One biggest question about HyperSense is whether it provides an in-game advantage in competitive games. The short answer is that HyperSense does the opposite in most competitive scenarios.

HyperSense seems like it would lend itself nicely to competitive games with the potential to accentuate enemy player footsteps and reloads with vibrations. But in competitive games like Overwatch, Fortnite, and Rainbow Six Siege, there’s no real point in using HyperSense. While enemy movement, gunshots, and other player-produced noises are sometimes relayed via HyperSense, they overwhelm the rest of the audio and can lead to avoidable deaths.

In Overwatch with HyperSense set to medium, there’s almost no chance of catching the same amount of audio cues you would with the feature off. Granted, Overwatch is not the best game to showcase the value of HyperSense since it tends to be a more chaotic mix overall.

Looking at a more controlled space, Rainbow Six Siege also felt less than ideal for HyperSense. Set to medium, HyperSense had little to no effect on the game audio and didn’t produce much haptic feedback at all. Bumping the setting to high created a strange and messy experience. The high setting gave away enemy positions on the floor above, but once positioned outside of the room above, there was nothing but random rumbling. Flicking HyperSense to off, the footsteps revealed themselves and provided actionable information.

Fortnite provided a bit more of the immersive experience Razer intends with HyperSense. Bouncing of tires, gliders deploying, and AR rounds rattling off in the near distance all work well with HyperSense. On medium, HyperSense never overtook the game audio like it did in Siege or Overwatch.

HyperSense just doesn’t fit in competitive multiplayer, and it shouldn’t be around anyway in case of unfair advantage. This feature is best suited for narrative and casual experiences. It’s a worthy effort, but for such an expensive feature, it doesn’t make sense for every gamer.

As with most Razer headsets, the Kraken V3 HyperSense is customizable in the Synapse software. Past iterations of Synapse have felt less than polished, but this time around everything updated just fine and customizations stuck. Users have access to enhancements like bass boost, sound normalization, voice clarity, and several EQ presets. All of these settings have a noticeable effect on the audio but bass boost is the most noticeable. Bass boost is worth a shot for music lovers, but might not work to everyone’s advantage in-game.

Performance is very much the same in terms of input. The detachable mic provides clear communication and is customizable through the software. Users have access to enhancements and other settings, but the most important one is ambient noise reduction. This setting helps clean up the input and makes the most noticeable difference of any setting.

Shaving .11 pounds from the .86-pound weight of the Kraken Ultimate adds an extra layer of comfort to what is otherwise a similar headset. The weight reduction puts less pressure around the ears and jaw. With just a little bit of weight shaved off, the new headband also puts in work to keep the top of the user’s head pressure-free and heat-free. The earpads reap a similar reward and barely heat up, which is something that can rarely be said.

The only real issue to report is the lack of a detachable cable. With the upcoming Kraken V3 Pro also featuring HyperSense, there doesn’t seem to be any reason to not include a detachable cable at this price point. It’s the only design element that doesn’t fit in with the rest of the headset’s quality.

If you play a wide variety of games aside from competitive titles, the Razer Kraken V3 HyperSense is a worthy update to your headset lineup. If this doesn’t describe you and your main interest is competitive gaming, the regular Kraken V3 headset is a better play. The additional premium isn’t worth it for players who stick to their tried-and-true competitive multiplayer games.

Aside from the situational applications of HyperSense, there isn’t much to complain about. Razer gave itself a break by making three iterations of the Kraken V3. With the standard Kraken V3 being an easy alternative for competitive players, there’s no reason to knock the Kraken V3 HyperSense for not being a competitive option.