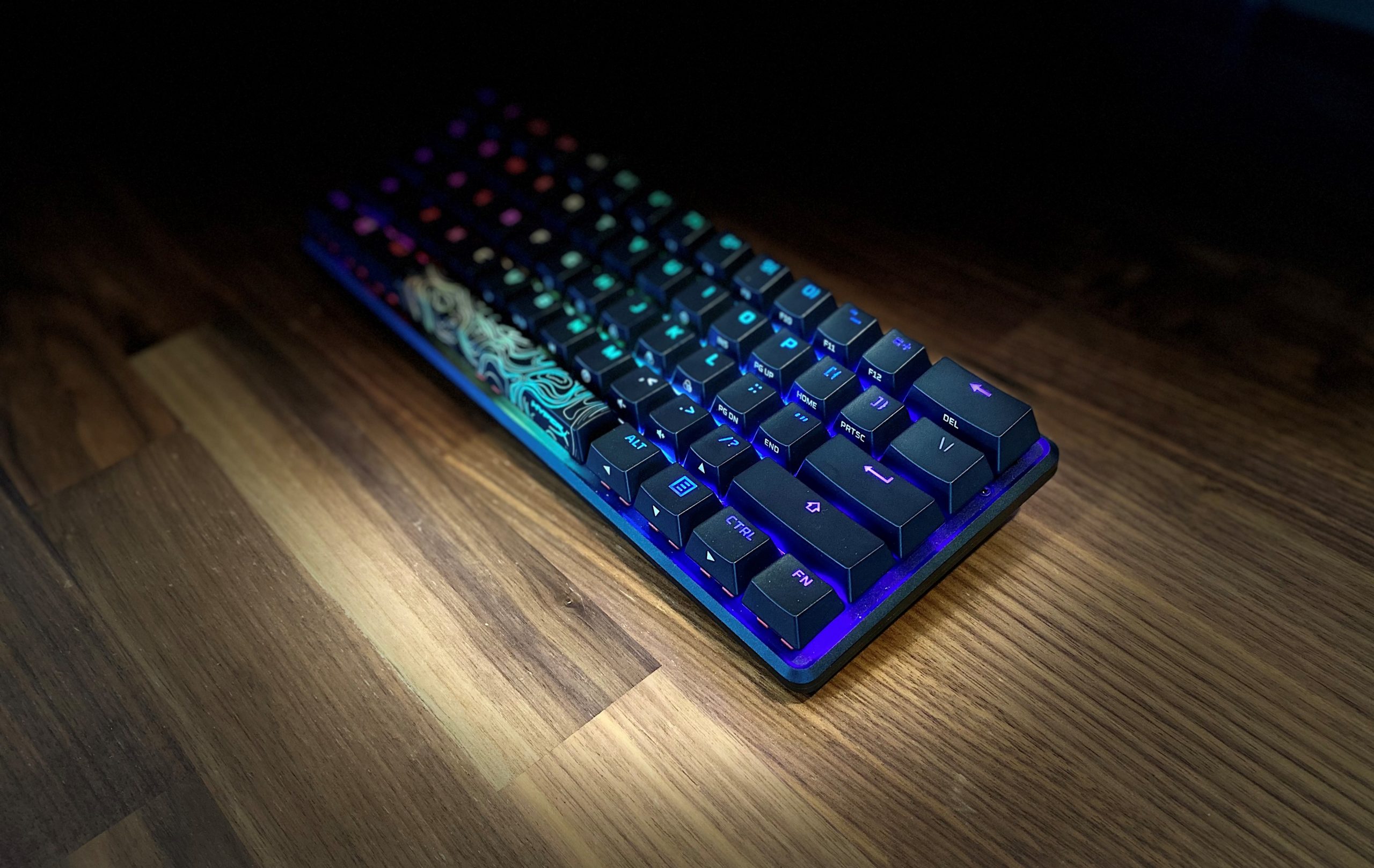 After two successful collaborations with Ducky, HyperX took the proprietary plunge with its new Alloy Origins 60 keyboard. HyperX’s 60 percent offering is a perfect board in every way except for one glaring oversight.

HyperX’s collaborations with Ducky came out of nowhere, but each one had both companies’ identities woven into the product. Picking Ducky as a partner was a wise choice on HyperX’s part since Ducky helped popularize the 60 percent form factor and is known for putting out quality keyboards. The two collaborations sold out immediately, which was no surprise given both companies’ pedigrees. Considering the success of these collaborations, HyperX’s choice to dive headfirst into the 60 percent market with its own proprietary model is a natural step in the evolution of the Alloy Origins line.

After releasing the HyperX Alloy Origins in 2019, HyperX continued to expand its flagship line of keyboards with a tenkeyless model and a well-rounded set of proprietary switches. These keyboards and switches combine to make some of the more impressive prebuilt options on the market. Each iteration of the Alloy Origins board has been sturdy, reliable, and light on its feet. This shrunken-down version of the Alloy Origins follows in its predecessor’s footsteps in many ways.

The 60 percent form factor has become wildly popular over the past two years for a couple of reasons. The small size of 60 percent boards allows them to be angled more dramatically to decrease the space between your arms. Because our arms are meant to be shoulder-width apart, full-size keyboards can sometimes cause strain after long hours of gaming. While this won’t affect every gamer, it might help those who are experiencing discomfort while gaming. The 60 percent form also presents a great option for gamers who are tight on space or travel frequently, though HyperX’s keyboards are anything but light.

Like the other Alloy Origins keyboards, the 60 features impressive build quality. Its fully aluminum case is a rare sight to see among prebuilt keyboards. While other companies boast of aluminum constructions, few actually feature a fully aluminum case. Many keyboards only feature an aluminum top plate, which adds some heft and durability, but it’s hardly a bragging point. HyperX excels at designing impressively sturdy keyboards and it’s good to see the phenomenal build quality return for the Alloy Origins 60.

Another returning feature is the HyperX Red switches. While most peripheral manufacturers have proprietary switches, HyperX’s are a cut above the rest. Switch preference is always a subjective matter, but the quality of these switches is inarguable. The Red variants have an actuation force of 45 grams, similar to a standard Cherry MX Red found in many keyboards. HyperX’s Red switches have an activation point of 1.8 millimeters, which is 0.2 millimeters higher than a Cherry MX Red switch. The difference here is negligible, but HyperX switches do feel a bit more stable than standard Cherry MX Reds. HyperX’s Red switches have a lifespan of 80 million clicks, which overshoots Cherry MX Reds by about 30 million clicks, according to HyperX’s website.

Fans of the Alloy Origins line will be glad to see the return of HyperX’s double-shot PBT keycaps. While these keycaps may not be as textured or oil-resistant as Razer’s keycaps, they hold up well over time. The keycap legends are crystal clear with no weird bubbling, allowing the RGB lighting to pop against the blacked-out design. In addition to the standard top legends, the side-printed ones help ease the transition to a 60 percent keyboard by showing the user each key’s secondary function.

Other notable features include extra keycaps, a keycap puller, and a detachable USB-C cable. Buyers will find an RGB-friendly spacebar replacement with a topographic map design and a HyperX logo Esc keycap. The keycap puller should make things a bit easier when swapping back and forth between keycaps. These are some useful carryovers from the Ducky collaboration. The addition of a detachable USB-C cable is another returning feature that adds a great deal of portability and value. Somehow, there are still major peripheral manufacturers skimping out on USB-C—and it’s a bit confusing at this point.

One thing that hasn’t remained consistent is the stabilizers. Our reviewer had previously lauded the Alloy Origins stabilizers as being some of the best on the prebuilt market. That feeling hasn’t translated to the Alloy Origins 60. Every stabilizer has a different sound, but all of them possess some aggressively loud rattling. The spacebar is easily the guiltiest of the bunch. The spacebar is loud and a bit unruly when it comes to movement.

There were a few times where our reviewer got tripped up in-game because there was way too much play in the spacebar. Unsurprisingly, the spacebar stabilizer is easily the most disappointing aspect of this board. It might be solved with a bit of dielectric grease, but that’d almost certainly void the warranty. This is a big letdown, especially considering the solid stabilizers on the Ducky collaboration.

Overall, the Alloy Origins 60 is a great follow-up that rounds out the Alloy Origins line of keyboards. There are enough positive attributes of this keyboard to overlook the spacebar, but HyperX should include far better stabilizers at this price.