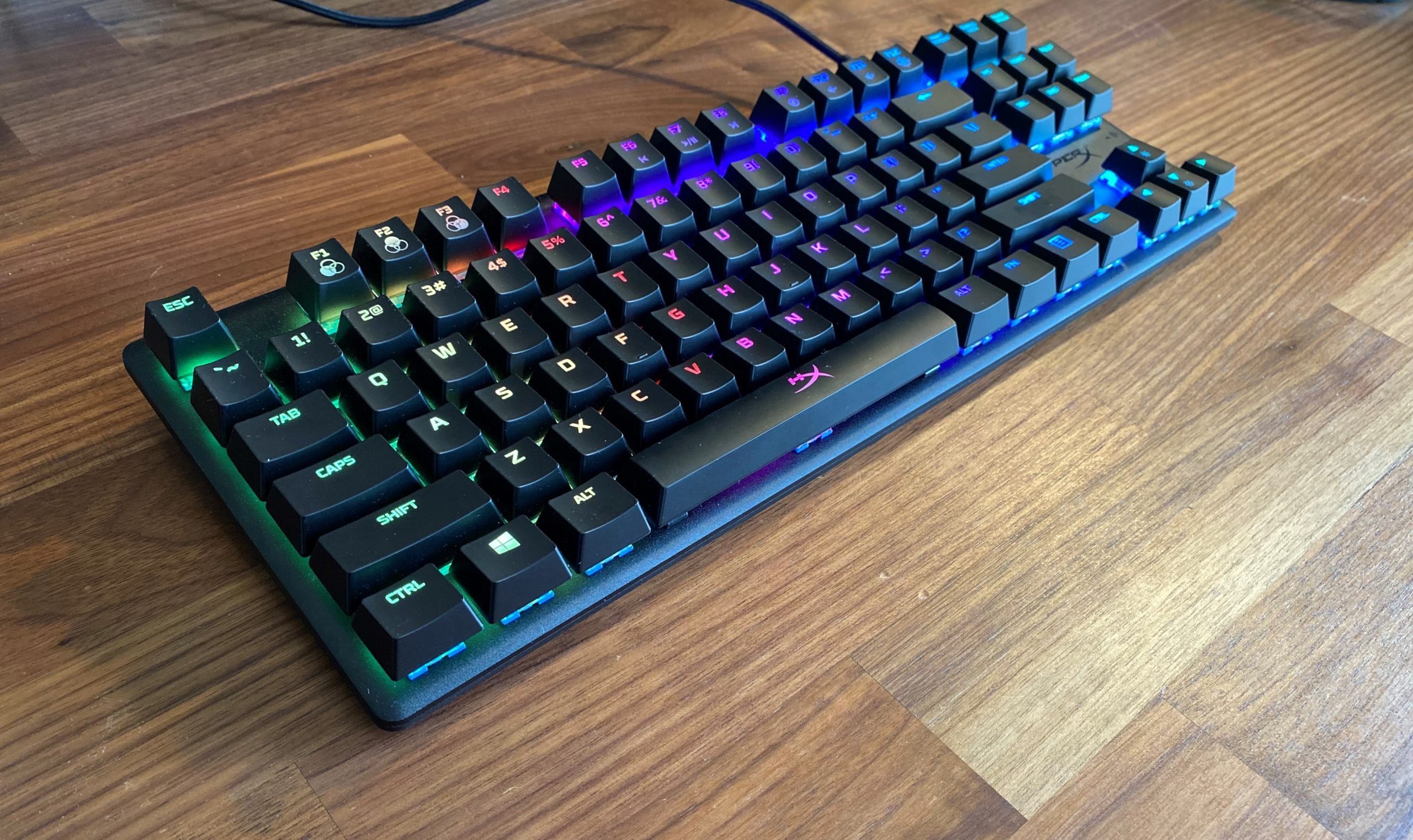 Keyboards haven’t seemed like a priority for most major brands in 2020 and 2021. Razer attempted to give fans the most fully-featured keyboard with the Huntsman V2 Analog, but the results were a mixed bag. Meanwhile, Logitech didn’t have any notable keyboard releases aside from a League of Legends collaboration featuring K/DA. HyperX is one of the few companies that’s remained consistent in releasing quality projects, despite a lull in the rest of the market.

The newest iteration of the Alloy Origins Core succeeds thanks to its tried-and-true design and HyperX’s phenomenal proprietary clicky switches.

HyperX’s aircraft-grade aluminum design is an inarguable signature of quality. Many companies claim to manufacture keyboards with aluminum constructions, but that’s usually only half true.

The market is plagued with aluminum top plates and plastic cases that cause unpleasant metallic pinging and rattling. You won’t hear any of that nonsense with an Alloy Origins keyboard, even if it has the company’s clicky Blue switches installed.

The Alloy Origins Core still plays it on the safe side like it did when it initially launched in 2019. But the feature set held up well and puts a couple of companies to shame some two years later. For such a seldomly discussed keyboard line, the Alloy Origins Core has everything you could want in a modern tenkeyless keyboard.

Featuring a detachable USB-C cable, dual-layer flip-up feet, and full RGB lighting, this keyboard nailed down the formula for success years ago. Many of these features are still tall orders to ask for from companies of similar stature. USB-C, in particular, is just now starting to be rolled out in Razer keyboards, while Logitech is still dragging behind on implementing USB-C. But it has been a quiet year or so from Logitech in general.

After several iterations of this keyboard, our reviewer wishes HyperX would use PBT keycaps. It seems only fitting to give this keyboard the quality keycaps it deserves. While the keycaps on the Alloy Origins aren’t the worst, they do feel noticeably thin and somewhat brittle. These keycaps also collect a great deal of oil since they’re ABS.

HyperX’s proprietary switches are easily some of the best around. The Red and Aqua variants impressed our reviewer with how much they improve on the Cherry MX formula, while the Blue switches may have converted them to a clicky switch user for the time being.

The original Cherry MX Blue switches are a classic, but HyperX improves on them by adding more stability and faster actuation to the formula. Original MX Blues feature an actuation point of 2.2 millimeters. HyperX’s Blue variants boast an actuation point of 1.8 millimeters, shaving off 0.4 millimeters. This difference is minor, but it does feel slightly more responsive than a traditional MX Blue. Getting over the tactile and audible hump comes a bit sooner than you’d expect when compared to Cherry’s original switches.

HyperX’s Blue variants also benefit from the fully aluminum case. The sound profile is something you’d expect on an entry-level enthusiast board and not a mass-produced product. Typically, there’d be some kind of pinging or echoing going on, but that’s not the case with the Alloy Origins Core. All you’ll hear is the switch’s click jacket and bottom out. There’s no ping or echo, just a pleasant audible click that confirms your input registration.

Gaming on HyperX’s Blue switches feels reliable and responsive. Our reviewer had a brief adjustment period with the heavier 50-gram actuation force but enjoyed the snappy feedback once they were over the initial learning curve. If you’re used to linear switches like Cherry MX Reds or tactile ones like MX Browns, these will take a bit of getting used to for the first few matches.

Despite the solid performance of the switches, there’s one issue with this keyboard’s sound profile.

The original Alloy Origins run had better than average stabilizers, but that hasn’t been the case for some time now. HyperX had a series of ups and downs recently regarding its stabilizers, with the worst instance being the heavily anticipated Alloy Origins 60. The stabilizers on the 60 were borderline appalling considering HyperX’s solid track record with its keyboards in the past.

While the Alloy Origins Core’s stabilizers aren’t as deplorable as the 60’s, they do stand out as the keyboard’s weakest feature. Because the keyboard’s aluminum body does such a solid job of mitigating the noise produced by the Blue variants, the stabilizers’ rattle is highlighted to an annoying extent. There’s a lot of play in each one, with the worst offender being the space bar.

For such a high-quality line of keyboards, it strikes our reviewer as odd that HyperX won’t take the plunge and either factory lube the stabilizers or find another solution.

NGenuity has never been better

HyperX’s NGenuity software had a bumpy road to success. In earlier iterations, our reviewers outright loathed having to use it to test customization options. But HyperX has added simple quality-of-life enhancements that make the software much more reliable and user-friendly.

Customizing and saving onboard profiles isn’t as frustrating as it was in the past. There was a time when you had to guess when NGenuity was done saving your profile. If you guessed wrong, then you had to go back and do it all over again. Our reviewer is happy to see that this is no longer the case and that profiles are created and stored with ease thanks to a visual indicator that tells you when the profile is fully saved.

Our reviewer also enjoyed the Flame RGB option. This preset lights up each key vertically in a shape reminiscent of a flame. It’s a far cry from groundbreaking, but the Flame effect is a fun take on a customization option that’s slowly becoming more played out.

If you’re in the market for a new tenkeyless keyboard that won’t break the bank and will last years, the HyperX Alloy Origins Core should be the first stop on your list. Our reviewer acknowledges that clicky switches are polarizing, but they’ve also never enjoyed them as much as they did on the Alloy Origins Core keyboard. The full aluminum body mitigates the harshness of the clicky switches and it makes for a tight gaming experience that feels lighter on its feet than it would with standard Cherry MX Blues.