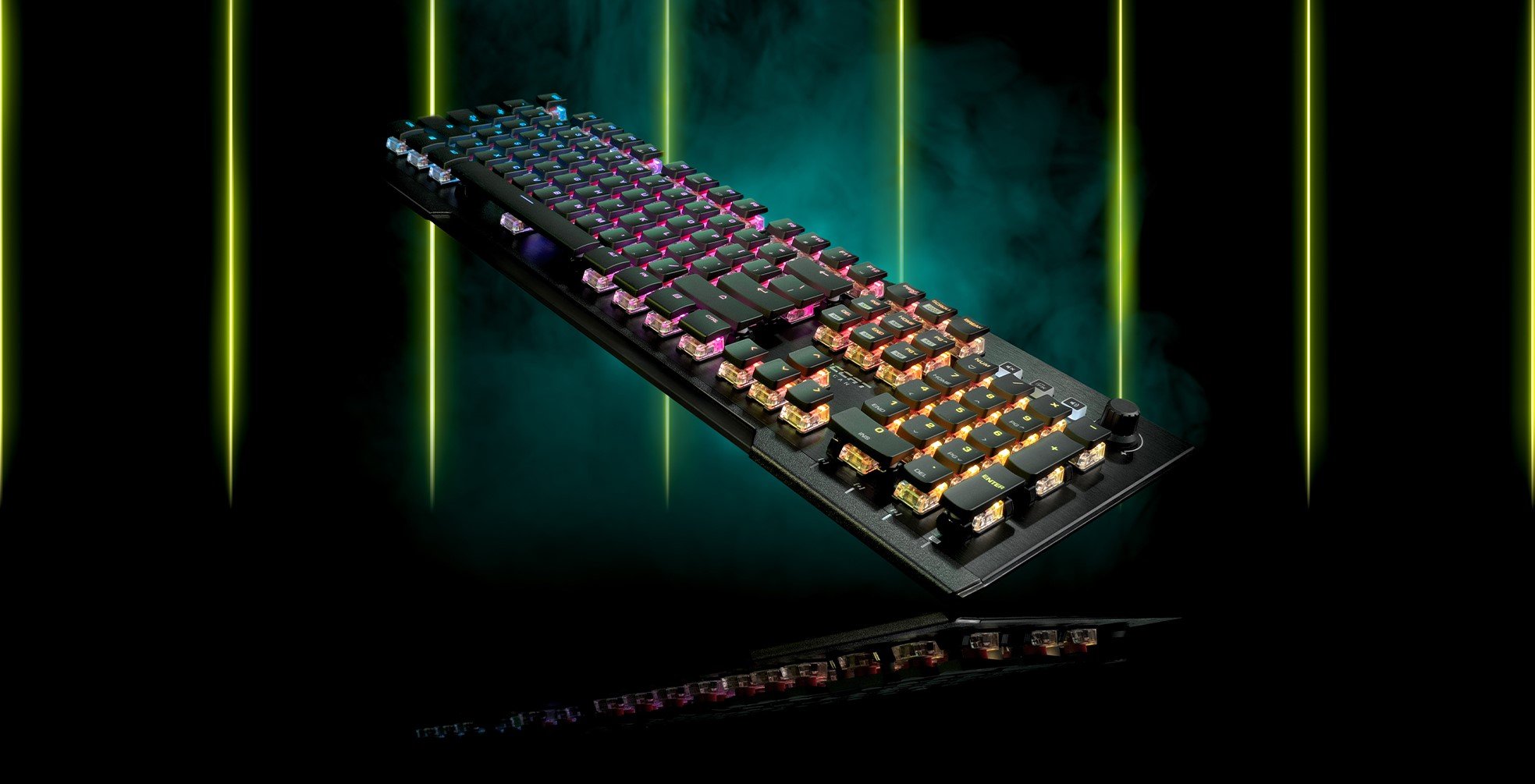 ROCCAT is on an upswing with its latest keyboard and mouse releases with the Vulcan TKL and Burst Pro mouse. While the Vulcan TKL keyboard is a worthy and uniquely designed mechanical keyboard, the Vulcan Pro outpaces it in terms of sheer speed despite some poor aesthetic choices.

The age of the optical switch is here. Despite the popularity of mechanical switches, optical switches offer faster actuation and a more immediate-feeling response. Optical switches take some getting used to, but overall the experience ends up feeling marginally quicker. The learning curve associated with optical switches is steep at first, with users often misclicking and fat-fingering ults left and right. Once you overcome this curve, it’s easy to see why manufacturers like ROCCAT are keen on pushing their optical switches.

ROCCAT’s Vulcan Pro is a full-sized optical keyboard that provides the fastest speeds but suffers from some design flaws that don’t give off the same premium feel as the Vulcan TKL.

The Vulcan Pro shares some key design elements with the other keyboards in the ROCCAT lineup, like the volume knob, aluminum plate, flip-up feet, and floating key design. These are by far the most successful elements of this keyboard’s design. Having a volume knob is is always appreciated. The aluminum plate doesn’t succeed in creating a sturdy feel as it does in the Vulcan TKL and easily bends when pressure is applied. This case flex is likely due to the increased size of the Vulcan Pro.

Ergonomically-minded users will appreciate the inclusion of a magnetic wrist rest with a sleek and angular look. The wrist rest may not be as comfortable as the one on the Razer Huntsman V2 Analog, but it also doesn’t need to be, thanks to the Vulcan Pro’s slender figure. Our reviewer’s only criticism for the wrist rest is that some users may not see the need for it if they’re used to gaming on more high-profile keyboards.

Having volume controls and a versatile volume knob are big wins for the Vulcan Pro. Many keyboards skimp out on a volume knob. The Vulcan Pro does a great job of making the most out of the knob since it can switch between being used to adjust the RGB lighting brightness or volume with the press of a button.

A gripe our reviewer also had with the Vulcan TKL is the lack of dual-layer adjustable feet. Cut corners are easily noticeable at a premium price, and this one sticks out on both iterations of the Vulcan series.

Two design elements stick out immediately, with the most daunting being the two screws that sit above the F1 through F4 keys. Because there are zero customization options on the Vulcan Pro, there’s no need to open the case to tinker around. The lack of customization makes the screw placement feel more rushed than the rest of the design. There are plenty of low-profile keyboards that achieve a slim profile without having two screws in the top panel. Honing in on this design choice is a nitpick, but it’s generally not a great sign if your product design feels rushed.

The other design element that doesn’t sit quite right is the look of the volume and FX buttons. Having these buttons is a win at any rate, but our reviewer wishes ROCCAT would have given them an aesthetic that matches the rest of the board. The soft white rubber buttons don’t gel well with the rest of the design and don’t have customizable lighting like the rest of the board.

It doesn’t feel like ROCCAT put as much thought into this design as the Vulcan TKL. Maybe the design just doesn’t transfer well between the two keyboard formats. Either way, our reviewer hopes to see more consistency from ROCCAT in the future.

The main selling point of the Vulcan Pro is the optical switches. ROCCAT’s Titan Optical Linear switches are the second-fastest stock optical switches in the game. Boasting a 1.4-millimeter activation point, Titans follow behind Razer Optical Red Linears by .4 millimeters. The difference is negligible, but Razer does have the edge when it comes to absolute speed.

Despite being slightly slower than the competition, the Titan switches feel great. They are responsive and light but will take some time to feel comfortable. Our reviewer recommends hopping in a practice range or training grounds if your game of choice allows. Testing out this board outside of a match will help ease the pain of the inevitable misclicks you’ll make in the first few rounds with the Vulcan Pro. Every optical keyboard has a learning curve like the Vulcan Pro, so it’s less of a criticism and more of a heads up.

Oddly enough, the Vulcan Pro is much noisier than the Vulcan TKL. Our reviewer praised the Vulcan TKL for its quiet stabilizers that avoided the characteristic rattling of prebuilt keyboards. Not even HyperX could avoid this on its Alloy Origins 60, but the Vulcan TKL dodged it with grace.

Interestingly, the Vulcan Pro keyboard shares so much of its design with the Vulcan TKL but lacks its mechanical counterpart’s execution. Our reviewer believes the additional noise is due to there being far more space for the noise to bounce around inside the keyboard’s case. The materials appear to be virtually the same, but they don’t succeed in the full-size format.

ROCCAT’s software feels clunky no matter what device you’re using. Putting the General Features section front and center instead of the Key Assignment or Key Illumination sections is an odd choice.

Aside from the uncomfortable user interface, all the usual customization options are here. There are some unique lighting options to explore, but that’s about as fun as it gets. Key assignment is a little wonky. The drag-and-drop key assignment feature seems like it would be helpful but is a little finicky and isn’t the easiest way to customize key assignments.

The Vulcan Pro offers a speedy gaming experience, but it doesn’t stick the landing regarding its design. There are a fair amount of design choices that don’t feel well thought out and end up sticking out a bit more than our reviewer would have liked. The two screws in the board’s forehead, inconsistently designed utility buttons, and noisiness separate the Vulcan Pro from its TKL counterpart. Forgoing a second layer of adjustable feet also feels like a cut corner at this price.

If you’re in the market for a wickedly fast optical keyboard, the Vulcan Pro might earn your dollar if you’re not as picky about the design. If you’re a bit more aesthetically minded, however, something from a rival brand like SteelSeries or Razer might suit you better. The Vulcan Pro is by no means a bad keyboard, but its price asks users to overlook a bit too much.