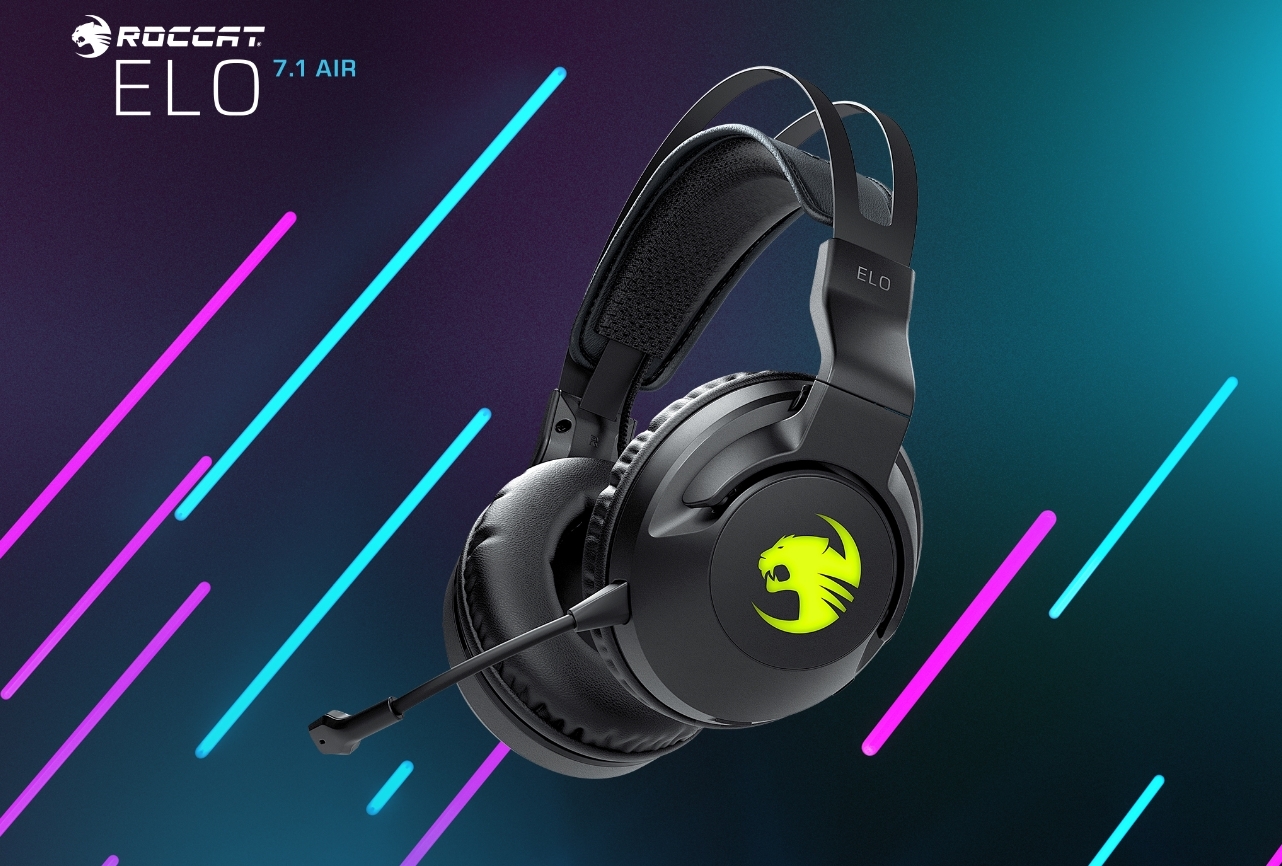 ROCCAT has some successful peripheral releases under its belt with the Vulcan TKL and Burst Pro lightweight mouse. This success doesn’t translate across all its products, however. Despite being owned by headset titan Turtle Beach, ROCCAT’s Elo Air 7.1 headset swings and misses on a few different fronts but remains a viable option thanks to its pricing.

The Elo 7.1 Air is ROCCAT’s 7.1 surround sound wireless headset. Nearly every major peripheral brand has at least one surround sound headset. Despite the wealth of 7.1 gaming headsets, not everyone is sold on its practicality. Adding 7.1 support typically leads to a price hike, and the difference between surround sound and stereo is difficult to notice for some everyday gamers.

ROCCAT’s Elo Air is one of the more affordable 7.1 options on the market, but this is somewhat a “get what you pay for” scenario.

Everything included in the Elo 7.1 Air is standard for a wireless 7.1 headset. Users get ROCCAT’s 50-millimeter drivers, a wireless dongle, USB-C charging cable, on-ear controls, and a detachable microphone. It also features a 24-hour battery life depending on your RGB lighting settings. These are hardly anything to write home about when considering the Logitech G Pro X 7.1 headset, but the price tag is what makes the Elo 7.1 Air a viable option.

Coming in well under the price of the G Pro X, the Elo 7.1 Air finds itself positioned in an interesting space. It’s by no means a premium-feeling headset, but it presents a solid feature set that tries to go toe-to-toe with the likes of the G Pro X. The quality of these features isn’t quite up to snuff. That being said, the price is right for those curious about 7.1 headsets but lack bankroll to take the plunge with a more premium option.

Straight out of the box, the Elo 7.1 Air has an interesting look, but it isn’t as visually striking as the company’s Vulcan TKL. The standard black plastic isn’t the most awe-inspiring design choice. But the self-adjusting headband is a design you don’t see on many mainstream gaming peripherals. Other products use this headband design, though it’s heartening to see a product that strives to include something different at a low cost.

Another visual element that sticks out like a sore thumb is the branding on both ear cups. Our reviewer isn’t the biggest fan of the ROCCAT logo in general, so having it blasted in all its RGB glory on the right ear cup seems louder than a more low-key logo like HyperX’s. Unless you’re nitpicky like our reviewer, this likely won’t be a concern.

The provided ear pads form a tight seal and do a great job of staying cool over long play sessions. The only issue with these ear pads is that they will become uncomfortable for users with larger heads. Our reviewer began noticing some discomfort around their jaw after a prolonged gaming session. It won’t affect everyone, but large-headed users beware—this is a tight squeeze.

The on-ear controls are a nice touch, but users will likely mix up the volume wheels. The Elo 7.1 Air features two independent volume wheels that control in-game sound and the mic monitoring level. This is a helpful and utilitarian feature, but the wheels feel identical and are placed right next to each other, making it easy to adjust the wrong setting. It is obvious when a mix-up occurs, but nobody wants to deal with that in the middle of a match.

Did you hear that?

Testing the 7.1 surround sound feature in the Swarm app didn’t inspire much confidence in this headset’s capabilities. The test sounded flat, and the channels didn’t sound all that different from one another. The only real difference is that right and left channels seem to come from their respective sides. But the right and left back channels sound almost identical to the standard right and left channels. The center channel, however, does hit you smack-dab in the middle of your forehead.

In-game performance was solid for the most part. Our reviewer found the headset provided accurate-enough imaging to make decisive calls based on audio cues. Results varied, but our reviewer never felt like the headset did them a disservice like the Logitech G333 earbuds. The bass can sometimes be overwhelming during longer gunfights in Call of Duty and Rainbow Six Siege. Users are free to tinker with EQ settings in the Swarm app to balance out this issue.

Users will still pick up on footsteps, but the location might be slightly off if you rely solely on auditory information. Our reviewer would advise running something else if you base your gameplay heavily on sound alone and have the budget for a more premium headset.

This headset’s detachable unidirectional microphone left our reviewer with mixed feelings. The mic is surprisingly clear out of the box. Finding the right sensitivity can be a challenge, though. If you’re a heavy breather, you’ll probably receive some complaints from your teammates. Taking the sensitivity down a bit will help, but your teammates will likely still hear your breaths.

ROCCAT includes built-in mic monitoring that can be adjusted via the Swarm software. Mic monitoring is a nice addition that can help users identify what ambient noise needs to be addressed. It’s unfortunate there isn’t much users can do to remedy this issue other than adjusting the sensitivity. By the time you’ve lowered the sensitivity enough, you might not even be picked up by the microphone, depending on which chat app you use.

If you live in a busy household or on a main street, this might not be the mic for you. Luckily, it’s detachable, so if you already have a mic, there’s no love lost.

Software is the easiest feature to pick apart as a reviewer, but ROCCAT’s Swarm app is particularly rough around the edges. The interface is crowded, and the main features aren’t presented front and center. Not even the 7.1 setting is visible at first glance if you don’t have it on full screen.

If ROCCAT cleans up its software, the experience as a whole might feel more polished. As it stands now, this software doesn’t represent a top-tier peripheral manufacturer.

ROCCAT’s Elo 7.1 Air delivers a mixed bag of results. It has a unique enough appearance with comfortable ear pads that will suit users without oversized noggins like our reviewer’s. The 7.1 surround sound leaves something to be desired but will hold up decently in-game. Its microphone is also passable because of the price, though it hardly sounds like a unidirectional mic.

There’s nothing spectacular about this package except for the price point. This headset is a good option for those who are curious about 7.1 surround sound and don’t have the budget for a more premium option. That being said, there are better implementations of 7.1 surround sound, though many remain skeptical of its in-game benefits. If you’re not dying for a surround sound headset, ROCCAT’s Elo X wired headset is worth a shot since its price is right and the performance is a little bit more akin to what you might expect for the price.