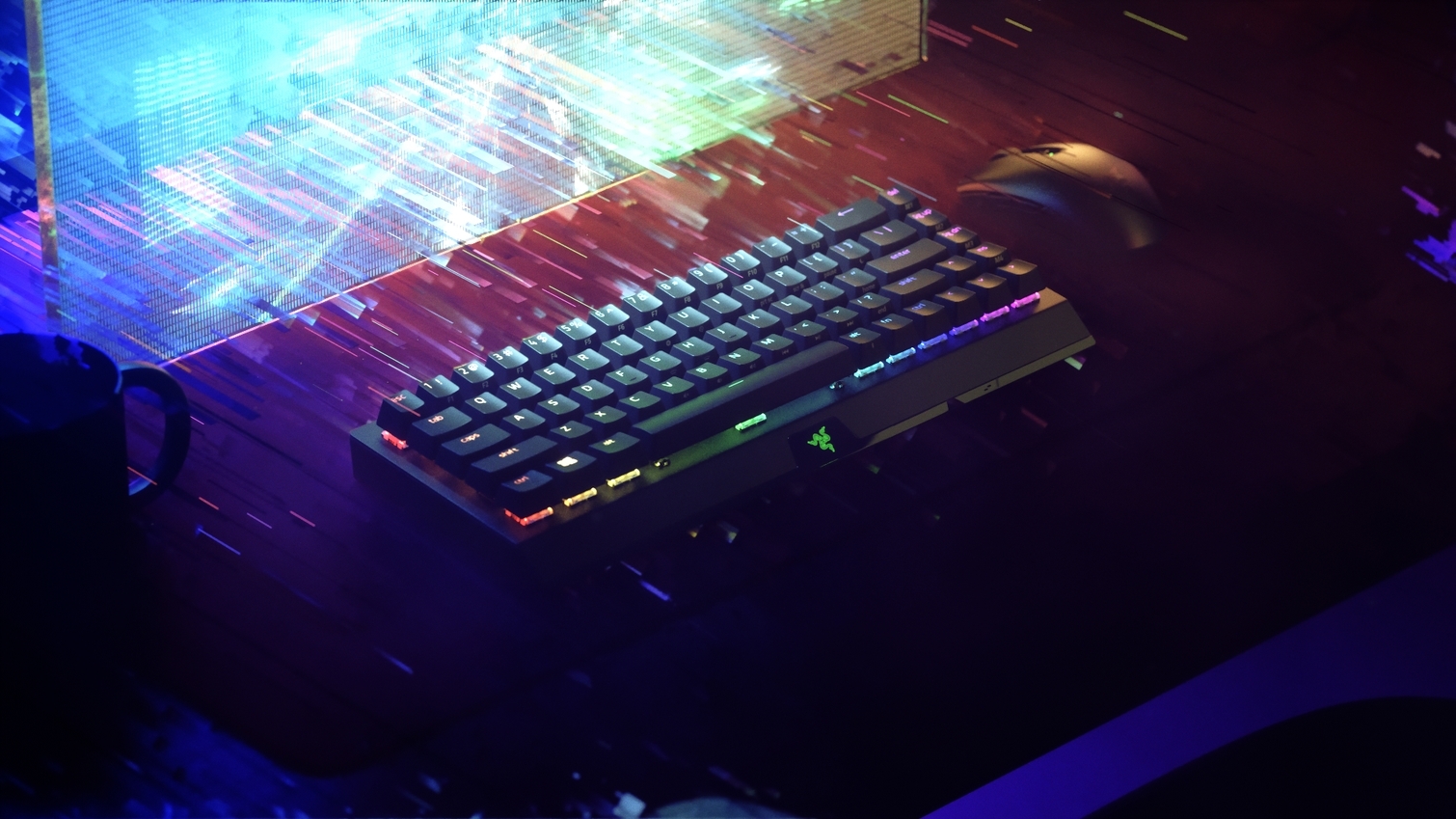 Razer reinvented its keyboard game in 2020 with updated form factors and features like PBT keycaps and more mature RGB lighting. Since the brand started leveling up its keyboards, fans received several new additions to the Huntsman line, including one of the first mainstream 60-percent keyboards, the Huntsman Mini.

The BlackWidow V3 Mini HyperSpeed succeeds in providing a balanced and speedy experience but some of the Razer design quirks are starting to get in the way of the brand’s otherwise phenomenal products.

One of the larger selling points of the BlackWidow V3 Mini is its 65-percent form factor. There aren’t many readily available 65-percent keyboards and fewer from companies as reputable as Razer. Seeing the company bring another beloved form factor to the mainstream indicates the brand is still keen on providing new experiences to its fans.

The main drawback of 60-percent keyboards like the Huntsman Mini is their omission of arrow keys and other navigation keys, but the BlackWidow V3 Mini doesn’t suffer the same pitfall. Users will find the standard navigation and arrow keys they’re accustomed to having within reach. The blend of form and function makes the BlackWidow V3 Mini easy to use at home or on the go for gaming and work.

Despite Razer shrinking down the BlackWidow formula, the Mini V3 uses the same design language as the original is on display. The slanted section of the top plate features a gloss strip and an RGB-backed Razer logo. An issue that may bother some users is the front portion of the top plate collecting fingerprints and oil.

Users gain extra functionality out of the navigation keys on the right side of the keyboard, thanks to on-the-fly macro recording. Holding Fn and Y initiates the recording process. Users can then type their key combo. Pressing Esc stops recording. Hitting the desired macro key on the right side saves the macro to the key.

Many of the standard Razer features make an appearance on the BlackWidow V3 Mini, but one major feature didn’t make the cut. The most significant omission here is the PBT keycaps. Instead, Razer subbed in double-shot ABS keycaps, which collect oil easier and can feel a bit slippery after longer sessions. Despite feeling oily, there’s no shine on the keycaps, and the texture remains pronounced after extended use.

The usual dual-layer flip-up feet make a welcome appearance. Having the additional adjustability helps to justify the asking price of the BlackWidow V3 Mini. Not everyone will use them, but flip-up feet provide a little more accessibility and help the keyboard cater to a wider audience.

Razer includes its aluminum construction from the Huntsman line, but this only consists of an aluminum top plate. The rest of the keyboard uses a standard plastic housing that avoids an obnoxious pinging sound when typing. Having an aluminum plate and a sturdy plastic case can’t take care of all the noise, though.

A flaw found in most Razer keyboards is the noisy stabilizers. While the level of rattling varies from keyboard to keyboard, it’s practically a given if you’re looking at a Razer keyboard from 2019 or later.

Backspace, Enter, and Shift stabilizers each exhibit loud and unique rattles that don’t align with one another when you’re in the groove of typing. Oddly enough, they don’t sound too far off when pressing them on their own. Another reason these stabilizers sound so poorly is the fantastic spacebar stabilizer with almost no rattle that gives off a pleasantly deep noise. It isn’t quite the “thock” noise the enthusiast community is always after, but it’s much more pleasant than other mainstream peripheral manufacturers’ spacebars like HyperX.

Razer’s Yellows are fairly smooth and surprisingly light with a soft bottom out. Having a more delicate bottom out feels a little unsatisfying since each keystroke ends with a bit of a mushy feel instead of a pronounced impact. Users who prefer a more tactile and clicky switch may prefer the Green switches, which are also available on the BlackWidow V3 Mini.

Razer packs the BlackWidow V3 Mini with everything needed for gaming and productivity. Users will find a 2.4GHz connection, detachable USB-C cable, Bluetooth capability, and a 1,000Hz polling rate. Connection type is toggled on the back of the keyboard with a small switch, while the detachable USB-C cable provides charge-as-you-go functionality.

Connecting both wireless connections is a cinch. The 2.4GHz connection just needs the included dongle to be plugged into the PC, while Bluetooth has a slightly more complicated process. After enabling Bluetooth on the device and keyboard, holding Fn and Alt while tapping one, two, or three will pair the device. The BlackWidow V3 Mini pairs with up to three devices at a time.

The Bluetooth and 2.4GHz wireless connections work well when used appropriately. Gaming on the 2.4GHz connection is seamless and as quick as a wired board, while Bluetooth worked well for general use. The Bluetooth dropped out briefly when repositioning the keyboard but was re-established quickly and seemed like more of an issue with our reviewer’s motherboard. No problems occurred while testing the 2.4GHz connection.

Users can expect a maximum battery life of about 200 hours with the RGB lighting turned off. Razer clocks the battery at 48 hours with RGB Spectrum Cycling at 30-percent brightness and 17 hours at 100-percent brightness. The BlackWidow V3 Mini will rarely die out mid-match if you practice good charging habits. After two days of work and play switching between the Bluetooth and 2.4GHz connections, the battery finally needed a charge.

Razer has been on a roll for the past two years. Everything from its keyboards to its mice aim to give gamers fully-featured options, and the BlackWidow V3 Mini is no different. The BlackWidow V3 Mini HyperSpeed gives users a rare 65-percent form factor with three modern connection types and flip-up feet.

Even with its added bells and whistles, the BlackWidow V3 Mini HyperSpeed misses a couple large boxes. Taking away the double-shot PBT keycaps is a misplay considering the price. Buyers can always purchase a second PBT set from Razer or another company, but the 65-percent form factor might make it tough to find an affordable and readily available set. The flexibility of having Bluetooth, wireless, and USB-C helps future-proof the BlackWidow V3 Mini and softens the blow of the missing PBT keycaps, though.

The only issue preventing this keyboard from going everywhere is its noisy and inconsistent stabilizers. It may not bother every user, but the inconsistency of the rattles gets old quickly. This feeling is exacerbated considering the spacebar stabilizer is nearly rattle-free and gives off a pleasant sound.

If you’re in the market for a well-rounded workhorse that performs well whether you’re working, gaming, or doing schoolwork, the BlackWidow V3 Mini HyperSpeed is a solid option. There are a few drawbacks, but the overall performance is worth the investment.