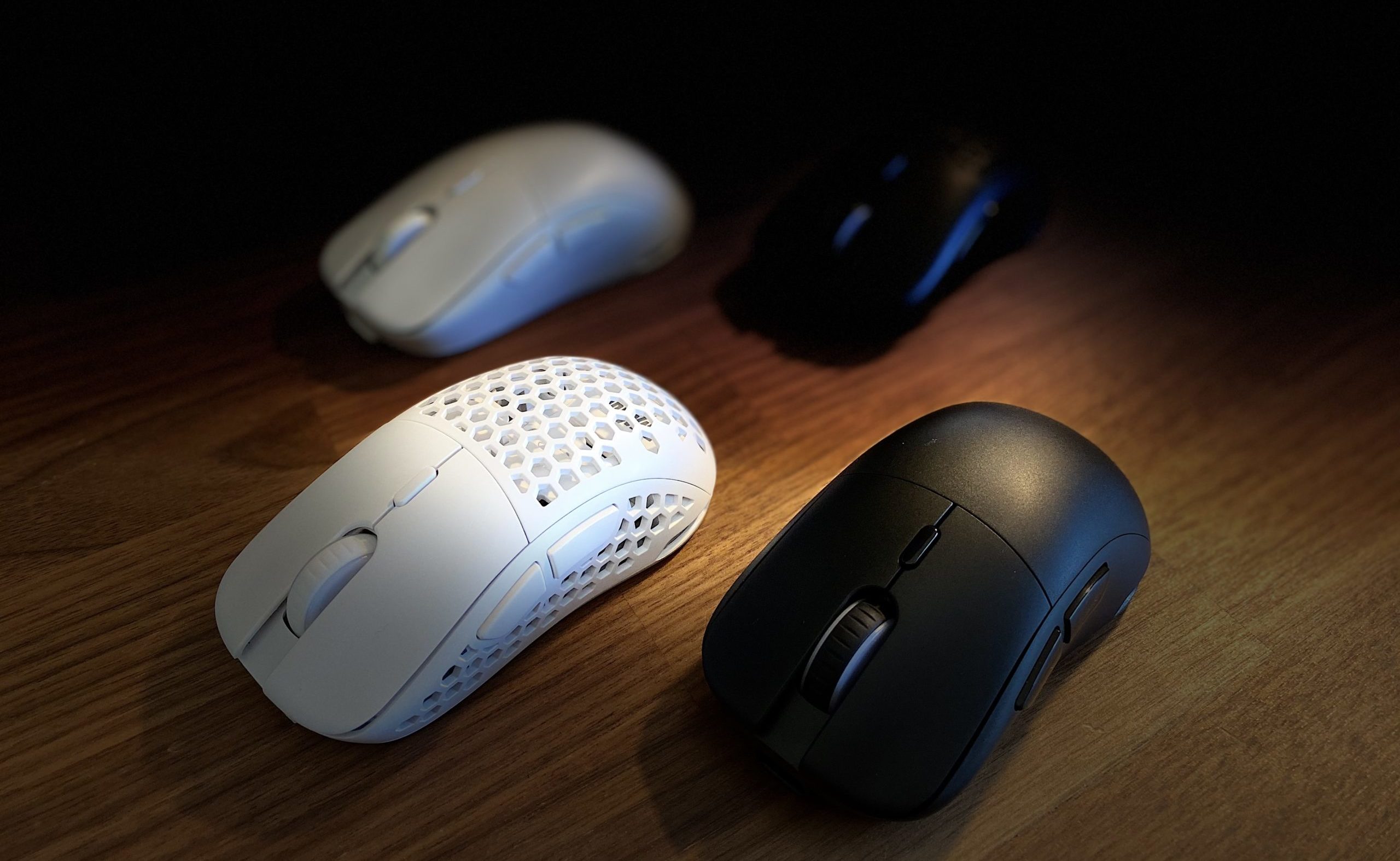 Pwnage built its reputation with the original Ultra Custom Ergo, a right-handed, ergonomic mouse aimed at consumers looking to add some flair to their setup. After a somewhat unorthodox release through Indiegogo, the mouse was widely praised for its performance and unique customization features.

A year later, Pwnage is back with the Ergo’s symmetrical sibling: the Ultra Custom Symm.

The Symm is Pwnage’s new symmetrical design that retains many of the original’s key characteristics while improving on a few of its predecessor’s missteps—save for one. But the Symm’s only real flaw sticks out when compared to other wireless gaming mice.

Returning features include wireless connectivity, a USB-C paracord for charging, removable shells and buttons, and a lightweight design.

The Symm comes in both a honeycomb and solid-shell version. The honeycomb design was popularized by Finalmouse and made widely available by several other peripheral companies like Glorious and Pwnage. Since the market has been swarmed with honeycomb gaming mice, many gamers are on the lookout for solid-shell designs.

The easiest way to justify the weight increase is to simply open the mouse’s top shell to reveal a welcome addition. One of the Ergo’s larger oversights was its lack of dedicated USB dongle storage. This feature is common among wireless gaming mice and is seen on lightweight competitors like the Logitech G PRO X Superlight and Razer Viper Ultimate. The absence of dedicated USB dongle storage was easier to look past the first time since Pwnage was just getting its sea legs. While this is a welcome addition, it’s likely the large plastic housing for the USB dongle is one factor that upped the weight this time around.

Returning for the second go-around is the PixArt PAW3335 Optical sensor. The Ergo also featured this sensor, and it proved to be a snappy and reliable sensor. While this sensor isn’t proprietary, it is a performance sensor seen in some of Asus’ gaming mice.

Pwnage loaded the Symm with Omron switches rated for 50-million clicks. Compared to the Ergo, the clicks feel slightly crisper in general, and the side buttons held up nicely after an extended testing period. The Ergo had some side button sinkage issues after prolonged use, but that issue looks to be remedied since the side buttons can take a considerable amount of pressure without giving. Because the mouse one and two buttons are removable, users can actually customize their mouse one and two switch feels by adding spacers. Our reviewer preferred the stock feel but can see how this would be an appealing feature for other users. Customizing the feel of the mouse one and two buttons go a long way in this mouse living up to the name Ultra Custom.

While the shells and buttons on the original Ergo were also removable, the Symm has refined the customization process. There’s no more worrying about snapping off a peg of the shell as you’re removing it or worrying about losing the old-style rubber DPI button. The DPI button is now a fixed plastic button with a nice click to it, and the shell design feels more user-friendly since the pegs don’t get snagged at odd angles. Everything about customizing these mice feels easier this time around. Pwnage really nailed the customization with the Symm.

Since the Ergo’s release last year, Pwnage has doubled down on customization options. Pwnage offers 11 different colorways of USB-C paracords, shells, and buttons. Buyers can also snag grip tape while they’re at it. These customization accessories are sold separately, but it’s rare to find this many customization options that are readily available and won’t void the mouse’s warranty. While other companies are going for limited release colorways that only come around once in a blue moon, Pwnage gives gamers an accessible way to customize their battle station in a uniquely freeing way.

Another big improvement is the size of the mouse feet. The original Ergo has the same 100 percent PTFE feet as the Symm, but the Symm’s feet are massive in comparison. Instead of four smaller mouse feet near the corners of the mouse and one around the sensor, there are two massive feet at the top and bottom, along with one around the sensor. There wasn’t anything necessarily wrong with the Ergo’s feet, but the Symm feels like it has significantly more glide to it, which mitigates the weight increase on both models.

The software used for customization isn’t the prettiest interface, but it does its job and allows users to customize DPI settings and RGB lighting. Having more than one profile to choose from is a nice feature that keeps pace with some of the larger brands out there. The RGB lighting turns off whenever the mouse moves unless it is in wired mode. It’s a minor gripe, but it remains an odd choice, even if it saves on battery life.

Paracords for the win

Pwnage clocks the Symm’s battery at about 66 hours for office use and 40 hours for gaming. These numbers might be accurate if you’re strictly doing one or the other, but if you’re burning the candle at both ends, the battery looks more like a 20-hour battery with the RGB lighting disabled. Despite only getting about 20 hours of battery, our reviewer was still impressed with how little they had to charge the mouse.

A massive win for the Symm is the paracord it uses to charge. The included paracord gives the Symm a near-wireless feel when plugged in, making the process of charging the mouse less of a drag. While the Logitech G PRO X Superlight is our reviewer’s favorite mouse, playing with its charging cable attached is nowhere near as comfortable as playing with the Symm’s cable attached.

It’s a good thing the paracord is a success since the one major concern is the wireless connection. While the original Ergo had great wireless range, the Symm’s range is unreliable at about three feet away from the dongle. Three feet may sound like a long distance, but with other lightweight competitors performing just fine at the same distance, it’s a bit perplexing that this is where the Symm falls on its face.

The original Ergo performed better than the Symm in terms of wireless connectivity when tested side by side. Pwnage does include a way to circumvent this issue by using the included USB-C cable with the receiver extender, but it still feels like a really odd downgrade. Our reviewer tried multiple Symms, but the wireless range on our reviewer’s batch wasn’t great.

The poor wireless range on the Symm is easily counteracted with the included wireless receiver extender, but some gamers might not want to have the paracord sitting unsecured on top of their desks. It’s going to come down to personal preference on this specific issue. The Symm functions beautifully with the receiver extender less than three feet away from the mouse, so it isn’t as though it’s a broken product. Companies often include receiver extenders with wireless mice for this very issue, but our reviewer has rarely used one.

Customization is better than connectivity

Overall, the Pwnage Symm improves upon the success of the Ergo in many ways except for one. Depending on how into customization you are, there are enough positives here that the wireless range issue can be overlooked.

A game-ready sensor, larger feet, and a wealth of customization options make a convincing case for the Symm’s potential. But the near-mandatory use of the wireless receiver extender keeps this mouse from being a no-brainer recommendation like its predecessor.