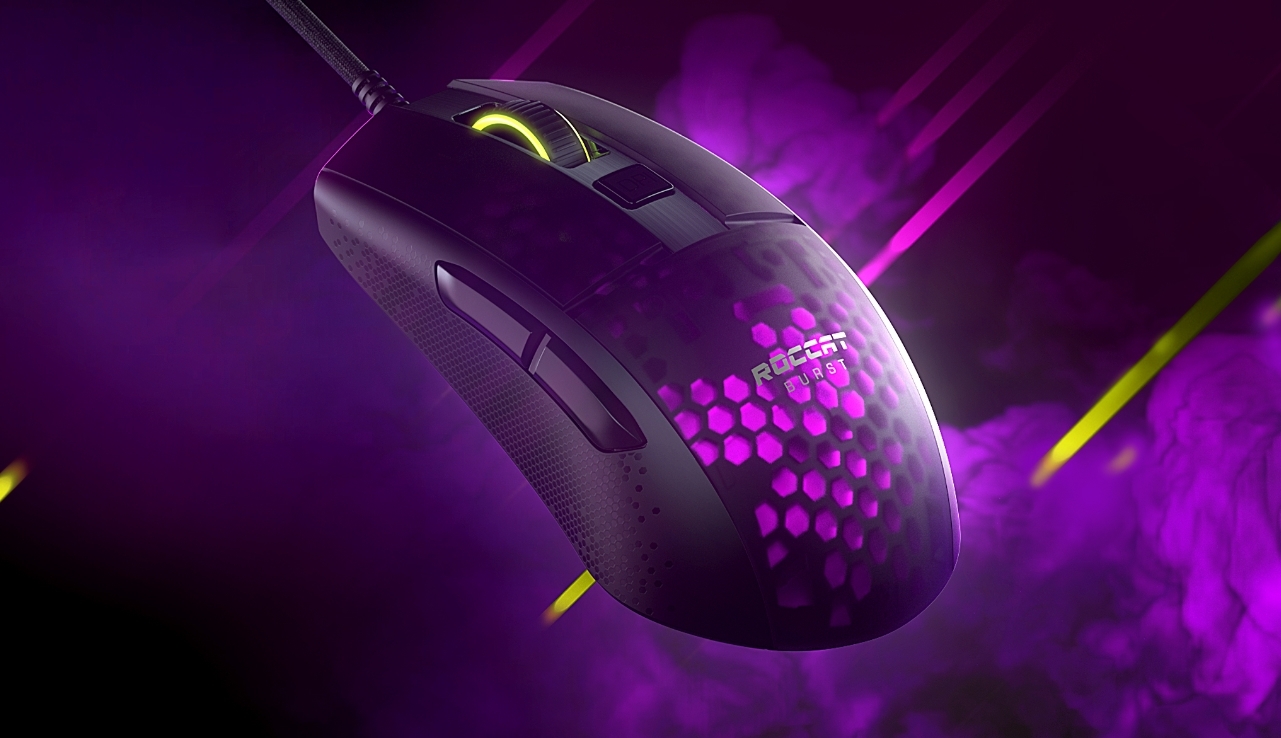 After several years of lightweight gaming mice with honeycomb designs, ROCCAT stepped up to the plate to give users a fresh take on a new design with the Burst Pro. It may not be the most high-end lightweight option, but the Burst Pro handles like a champ and shakes up the stale lightweight formula.

The lightweight gaming mouse takeover ramped up in 2019 following the late 2018 release of Finalmouse’s Air58 Ninja. Almost every major gaming peripheral company jumped aboard the hype train to churn out their own lightweight options. ROCCAT’s fully-realized lightweight mouse is a little tardy to the party, but it seems like the company learned from its previous, less impressive attempt.

Despite its delayed entry into the gaming mouse gauntlet, ROCCAT’s Burst Pro succeeds thanks to its versatile shape and uniquely ROCCAT design.

A burst of fresh air

Many companies follow Finalmouse’s honeycomb design to achieve the lightest weight possible. The past several years have seen iteration after iteration of this design, with companies trying to cut weight at the expense of aesthetics. But most honeycomb mice look nearly identical aside from shape. It’s become a tired design that companies like Razer, Logitech, and ROCCAT are avoiding.

The sidewalls of the Burst Pro have a neat geometric pattern that echoes the honeycomb endoskeleton. This pattern seems like just another aesthetic choice at first, but it surprisingly helps maintain grip in the heat of the moment. This effect wears off as the mouse collects more oil over time, though.

There are only two issues our reviewer has with this mouse’s aesthetics. The ROCCAT branding ham-fistedly covers the honeycomb pattern, and the buttons on the left side of the mouse cause inconsistency in the RGB lighting. Both of these issues are minor gripes since branding doesn’t bother every user. You will rarely notice the RGB inconsistency since your finger will always cover the affected region. 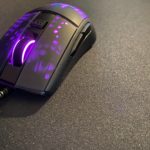 The Burst Pro weighs in at 68 grams. This weight is nothing revolutionary, but it does undercut the original Razer Viper by a mere gram. Considering the unique design elements employed by the Burst Pro, this weight is a good sign of what the industry is capable of when it comes to working within lightweight parameters.

It wasn’t long ago when companies struggled to find ways to cut weight and forgo the honeycomb design. Seeing a company use such a unique design gives the impression others will start playing around a bit more with lightweight mouse designs going forward.

The Burst Pro is a modest but capable mouse that hangs in there with the best of them without price gouging.

ROCCAT’s Owl-Eye optical sensor is capable of up to 16,000 DPI. While other high-end gaming mice feature sensors capable of up to 25,000 DPI, there’s really no need to go near the high end of your mouse’s DPI range unless you enjoy missing shots. Some may be critical of the lower DPI range, but it never became an issue, and there weren’t any noticeable performance hiccups.

Included on the Burst Pro are the usual six programmable buttons. All of the included buttons use ROCCAT’s Titan optical switches. Buttons feel drastically different from each other. The side buttons are hyper-sensitive and have a softer, more muted tone. The mouse one and two buttons are on the opposite side of the spectrum, featuring a weighty and tactile click with an odd, almost hollow tone. Meanwhile, the scroll wheel has some noticeable tactility but produces little to no sound. The drastic differences between mouse buttons might throw some users off since a different amount of force is required to activate each button.

Pure PTFE mouse feet are a staple of the modern lightweight mouse. The feet on the Burst Pro are large and outclass Corsair mice in glide. But these feet are thinner than a Pwnage Ultra Custom’s feet and may wear quicker than other options. To counteract the wear and tear, ROCCAT includes a spare set of mouse feet in the box.

Another commonly seen feature is the inclusion of a proprietary paracord cable. ROCCAT’s in-house Phantomflex cable feels somewhere between the Razer 8KHz’s beefier Speedflex cable and the Pwnage Ultra Custom’s slightly more pliable detachable cable. Our reviewer also appreciated that ROCCAT angled the cable upward instead of at a neutral angle. This angle helped prevent the cable drag often associated with wired mice.

ROCCAT’s Burst Pro falls into the medium size mouse category and fits our reviewer’s hand comfortably. For reference, our reviewer’s right hand measures 7.7 inches (19.5cm) in length and 4.1 inches (10.4cm) in width, categorizing their hand within the medium to large range. These dimensions make the Burst Pro ideal for users with medium to slightly larger hands.

The Burst Pro has a similar shape to the Zowie S1 and is a worthy option for most grip styles. Thanks to its larger hump, the Burst Pro is especially comfortable using a palm grip. Having a slight flare at the back of the mouse makes the Burst Pro a decent option for claw grip users but may present a challenge for fingertip grip users with smaller hands.

Switching between palm and claw grip was a breeze in our reviewer’s experience. While they changed up their grip style frequently, the mouse’s performance felt consistent. User experience will vary in this department, but this mouse is a strong option if you find yourself switching claw and palm grips frequently.

One issue our reviewer has with every ROCCAT product they’ve reviewed is the obtuse software. ROCCAT’s Swarm software buries the most important features beneath frivolous options like audible feedback through your PC speakers. But the experience is slightly different for the Burst Pro.

ROCCAT’s Burst Pro is easily the best product in its lineup. The company’s unique design language transfers to gaming mice well and does something fresh with the lightweight mouse design. It doesn’t reinvent the wheel, but it tries something new at the risk of being the odd man out. Like most ROCCAT products, the design won’t be for everyone, but it’s refreshing to see a company use the honeycomb design in a drastically different way and maintain a 68-gram weight.

While there are some inconsistencies with the mouse buttons, the overall feel of this mouse is sturdy and reliable. It also provides excellent support for palm and claw-grip users. Modern features like the Phantomflex cable and PTFE feet ensure this mouse can hang with the other lightweight beasts but at a lower barrier to entry.