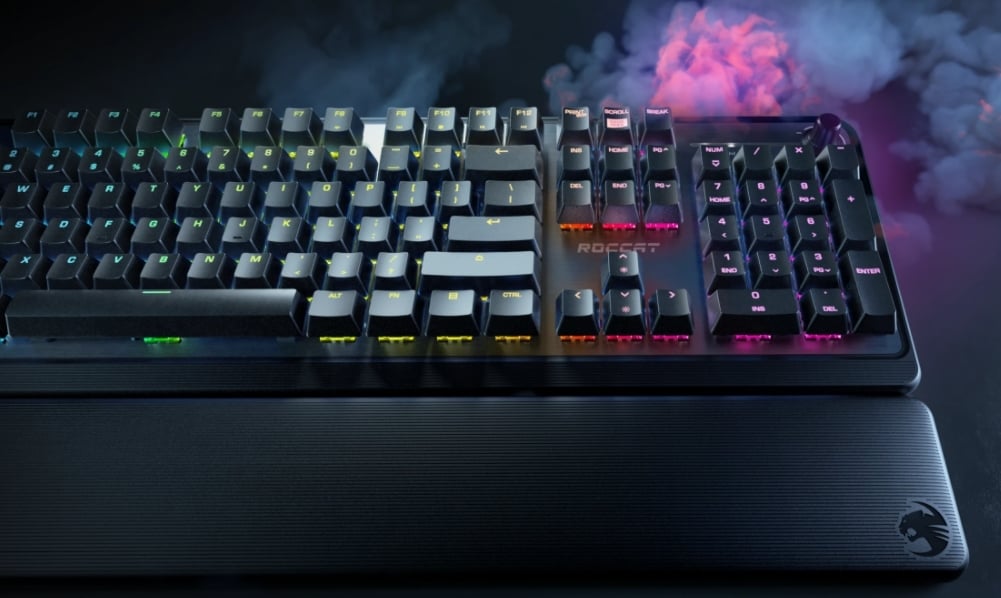 While ROCCAT’s previous keyboards presented players with divisive designs and competitive-level performance, its newest mechanical offering takes a more traditional approach. The Pyro’s surprising shift away from loud design language works in ROCCAT’s favor and may attract new users to its products.

ROCCAT’s Pyro presents a decent value but could have used a slightly sturdier build.

This full-size mechanical keyboard boasts a brushed aluminum plate and a plastic case. There is some flex to the board but nowhere near as much as its membrane cousin, the Magma. Because the two keyboards share the same case, the design feels a bit like a cut corner—though, that’s more of a nitpick than a critique.

The brushed aluminum plate exudes quality and gives the Pyro a sleek and understated look. ROCCAT went the subtle route with this keyboard, and it may help the product appeal to a broader audience. There’s something to be said for the brand’s usual gaudy designs, though. Our reviewer did miss that instantly recognizable ROCCAT design language. But to its credit, the company nails the subdued design with the Pyro.

ROCCAT loaded the Pyro with TTC mechanical switches instead of its proprietary Titan switches. While Titan switches appear on other keyboards, like the Vulcan TKL and Vulcan 122 AIMO, the brand omits them from the Pyro. Nevertheless, the TTC Reds provide a stable and speedy linear motion with a two-millimeter actuation point.

If you’re familiar with Cherry MX Reds, the TTC switches will feel right at home. While other company’s Red clones are less wobbly than the standard Cherry’s, the TTC versions feel the same as their Cherry inspiration. The performance here is quick, light, and immediate without leaving anything to be desired.

Keycaps here feel pretty thin and are likely ABS. The Pyro’s keycaps pick up oil quickly but never get slippery. If you’re a stickler about keeping your keyboard clean, it might be worth getting another set of PBT keycaps.

The stabilizers are surprisingly solid with minimal rattle. These stabilizers avoid the high-pitched ping and rattle of other brands, like HyperX.  ROCCAT’s stabilizers are far from perfect, and they do present some wobble, just not to the level of some competitor’s products.

Wait, I’m going to have to clean?

While the inclusion of a detachable wrist rest is hardly anything to scoff at, ROCCAT could have put a little more thought into this wrist rest’s design. ROCCAT’s grooved design can be a little frustrating. The grooves of the wrist rest quickly accumulate dust and lint. This issue will likely only bother neat freaks like our reviewer, who keeps their setup looking crisp day in and day out. If this becomes a pain, you can always remove the wrist rest. If you choose to go without the wrist rest, the typing angle won’t put too much strain on your wrists.

The inclusion of a volume knob is always one of the most appreciated features on any keyboard. Because going into your settings or tabbing out of a game to adjust the volume is such a hassle, having a volume knob presents a level of convenience that is sorely missed when omitted. Not every full-size board includes a volume knob at this price range, so its inclusion makes the Pyro that much more appealing.

ROCCAT’s Easy Shift[+] function is also a great little feature if you’re the right type of user. This function allows users to access secondary functions of the WASD key cluster by holding down the Caps Lock button. ROCCAT’s Swarm app is your go-to for programming these secondary functions. Our reviewer didn’t get much use out of the function, but it should come in handy for power users.

While our reviewer noted the flip-up feet as a win for the Magma keyboard, they fall a bit flat on the Pyro. Considering the price of this board, cutting out the second layer of adjustable feet feels like a cut corner. Because both of these keyboards share the same case, it seems like ROCCAT just threw an aluminum plate on the Pyro and called it a day. It’s not a deal-breaker, but it’s not a good look considering other boards at this price include dual-layer flip-up feet.

While the design feels like a cut corner, the Pyro ultimately achieves a subdued look that blends well on any desk. Having an aluminum plate adds durability to the board and gives off a premium look. Not everything here is gold, though.

Some elements of the Pyro feel a little behind the curve. The omission of a second layer of flip-up feet feels like the company didn’t want to put effort into modifying the Magma keyboard’s case to accommodate a second layer. The wrist rest design can also be a nuisance if you like to keep your space clean.

Missing out on the Titan switches isn’t the biggest deal considering the TTC switches hold up nicely. Despite being a lesser-known switch maker, users will get solid gaming performance out of the TTC switches.

The additional value presented by the extra bells and whistles goes a long way in overlooking the Pyro’s shortcomings. ROCCAT’s Easy Shift[+] function might help users who enjoy optimizing their workflow. Additionally, the volume knob adds practicality and flexibility to the Pyro.

If you’re in the market for a steady workhorse for gaming and general use, ROCCAT’s Pyro presents a solid price-to-performance value. Just expect to wipe down the wrist rest frequently.