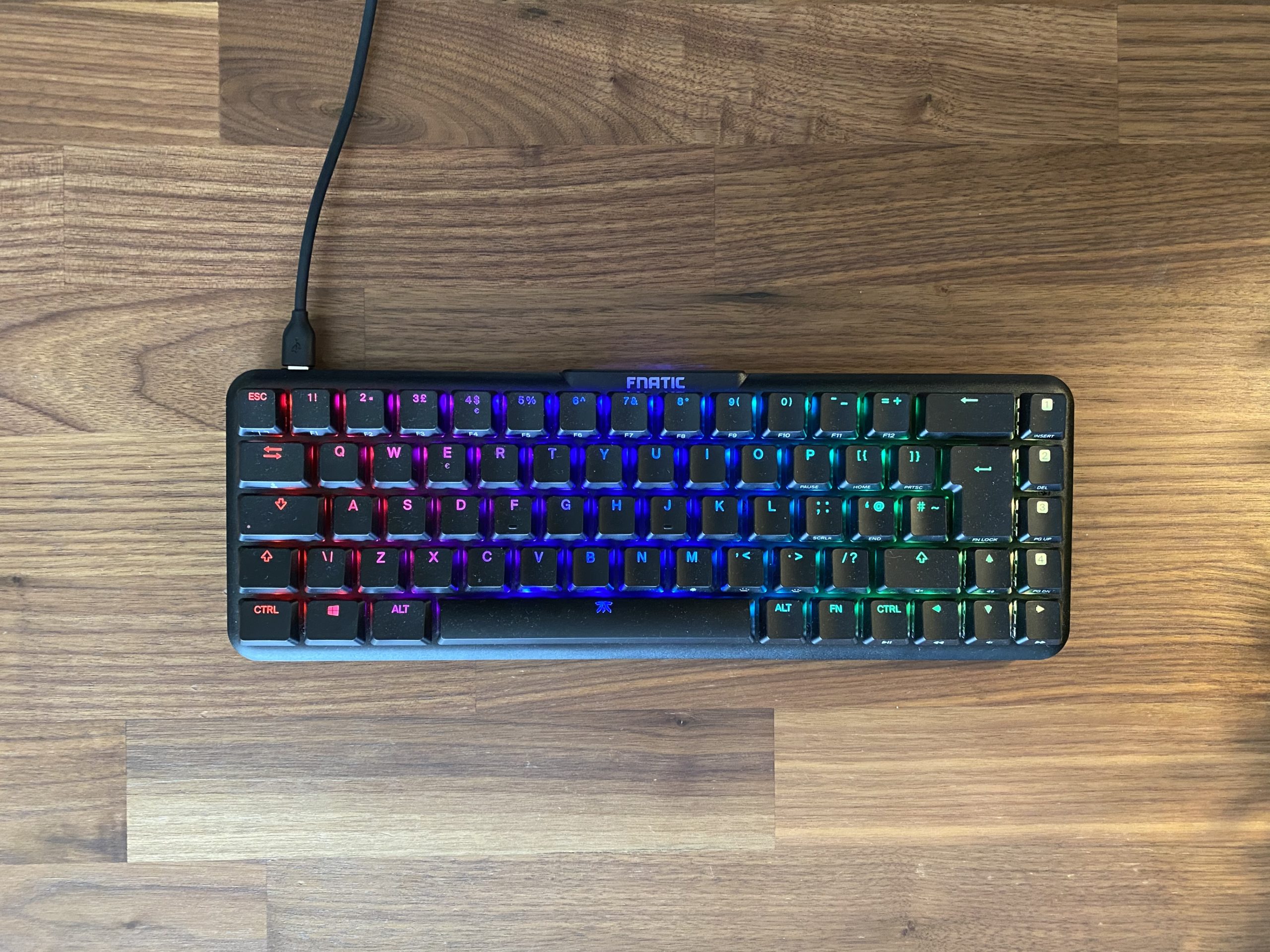 Small form factor keyboards have become a popular choice among esports athletes and competitive gamers alike. The Fnatic Streak65 is perfect for those who have yet to board the small form factor hype train.

Most esports fans will recognize Fnatic as an industry-leading organization with multiple titles under its belt, but the organization has slowly transformed into a lifestyle brand. This transition included the release of both the widely praised Fnatic React headset and the Streak65. Both products have helped Fnatic make a name for itself in the peripheral industry, and it’s exciting to see more companies enter the fold with options aimed at competitive gamers.

The Fnatic Streak65, as its name suggests, is a 65-percent, low-profile mechanical keyboard. This form factor strips away the function keys and number pad while bumping the arrow cluster inward. The space-saving form has been around for quite a while in the enthusiast market and is just now making its way over to the mainstream market thanks to the popularization of the 60-percent form factor seen in Glorious and Razer keyboards.

What makes the Streak65 so exciting is that it’s a widely available 65-percent board with decent build quality, better-than-average stabilizers, great switches, a USB-C connection, and tasteful branding and RGB. The Streak65 has an aluminum top plate that gives the board a boost in weight. At just under a pound, or 420 grams, this board is extremely light. Were it not for the aluminum top plate, it might even feel a bit cheap at first. But cheap definitely doesn’t describe this board. It feels designed for travel and functionality in tight spaces.

While there’s still some play in the included stabilizers, it’s nowhere near as loud as the Razer Huntsman Mini or the Logitech G PRO X keyboards. These boards don’t have the same form factors, but they’re aiming to be competitive keyboards, and so is the Streak65. What is even more interesting is the difference between the spacebar and the rest of the keys. The included switches have a near-silent actuation, but the spacebar has an audible click and feels slightly different. The same cannot be said for the other stabilizers on the board, and it seems to be a design quirk of these stabilizers. This may be a polarizing feature, but our reviewer wasn’t bothered by the noise. Those who dislike clickiness of any kind should be aware that this is a possibility when purchasing a Streak65. The stabilizers are factory lubed, but they could probably use a bit more to give the spacebar a more uniform feel.

The organization put its own FNATIC SPEED low-profile switches in the Streak65. These switches have a sensitive one-millimeter actuation point and a total travel distance of 3.2 millimeters. These figures are right on par with Cherry’s low profile speed switches and share a strikingly similar design aside from the Fnatic orange colorway. The FNATIC SPEED switches live up to their name but don’t have the same breakneck feel of Razer’s optical linear switches, which will make this a much more familiar type of speed for most users.

A big win here is the inclusion of a detachable USB-C cable for increased portability. There are boards more expensive than the Streak65 that still refuse to upgrade to a USB-C connection. USB-C is capable of faster connection and is overall less of a hassle due to its uniform shape. The inclusion of USB-C doesn’t reinvent the wheel by any means, but it shows that Fnatic is serious about finding its place in the peripheral market.

The Streak65’s floating key design makes the RGB lighting more overstated than something like the Huntsman Mini’s vibrant, yet subdued lighting. While RGB remains a subjective topic, there’s no denying the vibrancy of the Streak65’s light show. Our reviewer appreciated the inclusion of spacebar LEDs, since not all boards have these LEDs, but they help create a more uniform appearance. Spacebar LEDs often go unnoticed when they’re included but are easy to spot when absent.

Another small detail is the tasteful branding. The Fnatic logo on the spacebar is smaller than those found on HyperX boards. The only other significant branding is barely visible to the user. There is an RGB Fnatic logo on the top of the keyboard and one on the back facing outward in the direction the user is looking. Both of these are rarely visible. Even if a company had the world’s greatest logo, over-branding a keyboard makes it stick out like a sore thumb.

There are two areas where this keyboard needs work: the keycaps and the flip-up feet. There’s nothing inherently bad about these two things, but they do stick out after prolonged use. Keycaps on the Streak65 feel smooth but accumulate oil quickly. The oily buildup becomes moderately uncomfortable after longer gaming sessions and leaves your fingertips feeling a bit damp. In the future, our reviewer would love to see more textured keycaps on Fnatic boards. The flip-up feet are great at first, but including two levels, like the Ducky One 2 Mini, may have been better. Maybe the company omitted a second level to maintain a low profile, but it still feels like something that needs to be included at this price point.

Fnatic does have software that does the trick, but it’s still in early access. Users can still program macros, key binds, RGB effects, and save profiles onboard, but some features are under construction at this point. The software works and doesn’t cause any issues as far as our reviewer could tell—that’s more than can be said for some other developing keyboard software they’ve experienced in the past.

The bottom line here is that the Fnatic Streak65 is a great entry board for those who have yet to try out smaller form factor boards. It provides users with arrow keys, maintains functionality with a function layer, and doesn’t hurt your wallet too much. Along with decent value, this board also looks great and is a solid performer in and out of the game. If you’ve been sleeping on small form factor keyboards, the Fnatic Streak65 makes a strong play for your attention.