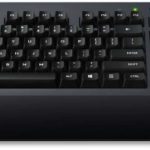 Gone are the days when gamers avoided wireless keyboards like the plague. Getting rid of all the cords used to mean more input lag, connectivity issues, and battery troubles—but these concerns are now a thing of the past.

Wireless peripherals have come a long way over the past decade and they’re now as good as their wired competition in some cases. Not only do the best wireless keyboards offer the same response time that the best wired mechanical keyboards have to offer, but they also open up a lot of desk space, which can be quite helpful if you can’t manage cables.

Though running out of batteries during an intense competitive match is still the biggest fear of any gamer looking to buy a wireless gaming keyboard, you can lower the chances of that happening by shopping for the right criteria. You should look into the battery life and the connectivity type, alongside how the keyboard gets charged before moving onto more subtle details, like the switches.

We’ve gathered the best wireless gaming keyboards available in the market to save you some time and allow you to get back to gaming as soon as possible. 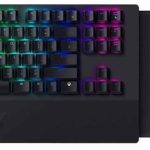 It’s hard to stray away from Razer when it comes to gaming-related products. The company’s been around since the earliest days of competitive gaming and continues to produce quality products.

Razer Turret is essentially a mouse and keyboard combo that was specifically designed to be used with Xbox One. The Turret also works on PC, which makes switching devices while gaming a breeze. The keyboard featured in the set was modeled after Razer’s classic BlackWidow, and the mouse resembles the Razer Mamba. The keyboard is mechanical, just like its inspiration, and features Razer’s Green Tactile switches. Additionally the mouse can go up to 16,000 DPI.

Though the keyboard doesn’t have any macro keys, the mouse has two dedicated ones on its left side and DPI adjustment buttons on the top of it. You can make further customizations to these buttons and the color scheme of Razer Turret’s RGB lights through Razer’s software. 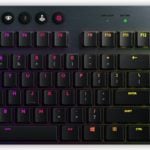 Despite entering the gaming market a bit later than its rivals, Logitech is one of the top names in the industry. The company transitioned over to producing its own patented switches over the past decade, making it an even fiercer competitor.

The Logitech G915 could be considered as the full-package of wireless gaming keyboards. When ordering a G915, players can choose from three different switches⁠: the GL Clickies, GL Linears, and GL Tactiles. The main difference between GL switches and MX switches seem to be GLs’ more low-profile look. This means that GL switches are shorter than MXs, but they deliver the same level of speed, performance, and accuracy.

Alongside ensuring the lowest possible response time with Logitech’s Lightspeed technology, the keyboard also comes with macro keys, media control buttons, and a fully customizable RGB system. In terms of battery life, the G915 can last about 30 hours with the RGB lights on at the maximum level. Going dark, however, increases its battery life drastically, allowing it to last up to 100 hours with all the RGB turned off. 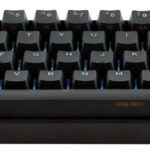 Full-sized keyboards are pretty much the industry standard, but they can take up too much space, especially if you don’t use the numpad. Sixty-percent compact keyboards allow you to use more of your desk by removing the numpad, function keys, and keys like Page Up, Page Down, End, Scroll Lock, etc.

Obinslab’s Anne Pro 2 may not look that flashy in terms of design but it’s one of the most well-built wireless mechanical keyboards despite having a plastic frame. Not only the plastic base is thick and durable, but the matte finish also gives it a rather premium feeling. Obinslab offers a wide range of selections when it comes to switches, including Gateron, Kailh, and Cherry MX switches.

You can customize the function of all the keys on the Anne Pro 2 and each key is also individually backlit. You can pair your Anne Pro 2 with up to four devices. The keyboard runs on a 1900 milliamp hour battery, which lasts around seven or eight hours with the RGB lights on. 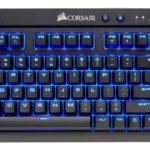 Budget wireless gaming keyboards exist, but almost all of them feature a drawback that affects one’s overall gaming experience.

Corsair’s K63 is one of the few budget wireless gaming keyboards that doesn’t hold back anything in terms of performance. It has a tenkeyless compact design and comes with a dedicated wrist rest, which is a rare sight to see these days. The keyboard comes with Cherry MX Red switches and features blue backlights instead of RGB lights. Its box says the battery should last up to 75 hours, although the battery lasts around 26 hours with backlights set to medium.

If you have nightmares about running out of battery during an intense box fight in Fortnite or a deciding round in VALORANT, you can always keep your USB cable close and start charging as soon as your battery starts running low. 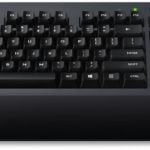 Logitech G915 is one of the best in the market. Its price, however, makes it quite hard to pull the trigger if you’re also looking to save some money.

The G613 offers pretty much the same deal with fewer customizability options and bling. Compared to the G915, you can only go with a single type of switches, Romer-G Tactiles, and it doesn’t have any RGB or backlights.

Despite lacking the aesthetics, the G613 doesn’t make any compromises when it comes to the quality-of-life features. The keyboard has six dedicated macro keys that can be customized through Logitech’s software, and a set of media control keys.

The G613 runs on AA batteries, and Logitech claims that a single pair can last up to 18 months. In addition to sending G HUB notifications, the keyboard also has a LED light that lets players know when the batteries are at 15 percent, which should give you enough time to plan a trip to the store for replacements.