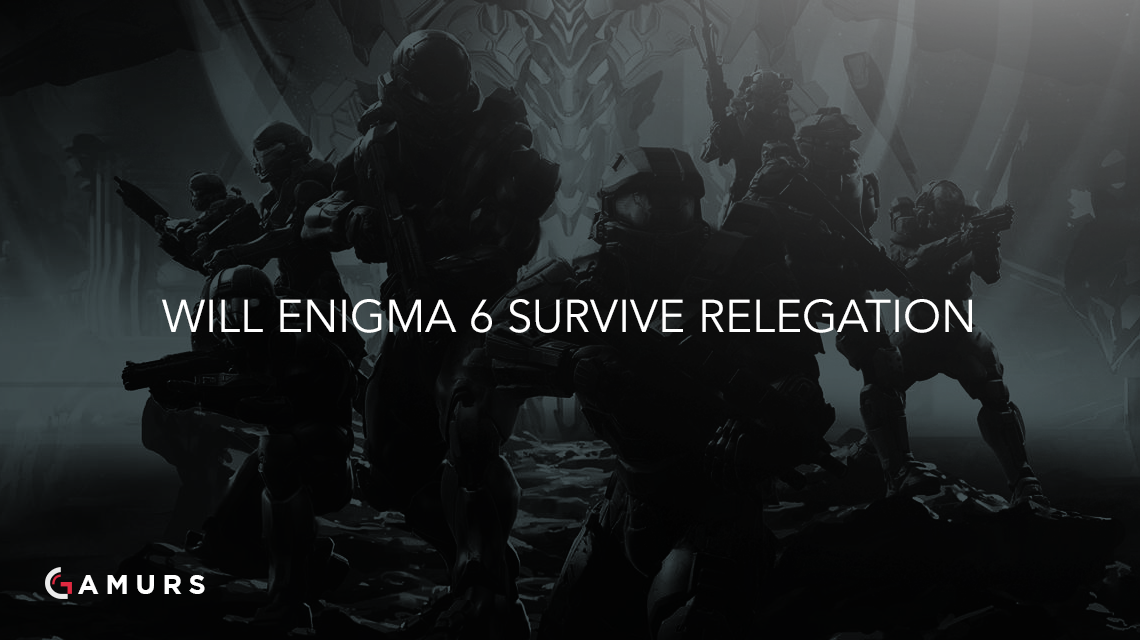 After a catastrophic season, caused not only by the team’s dispiriting performance but also by the rash behavior shown from some individuals, Enigma6 is on the verge of losing their Pro League investment in this relegation event. Months of strenuous effort and thousands of dollars being put on the line, Enigma6 can lose it all and the saddest part is that many within the community might not even care much.

Due to the culmination of disastrous altercations between players and allegations targeting E6 this season, the organization forcefully received a negative reputation. With their backs against the wall and a fierce wave of amateur competitors, featuring 3sUP and S6 Gaming, Enigma6’s ability to adapt and improve will be put to the test. But despite how much effort they put in, if they don’t acquire a top-two spot in relegation, they are done. Will Enigma6 survive?

I believe that due to the overwhelming amount of negative attention this team has built, many have significantly undervalued what this Enigma6 team is capable of when at their best. Although we have yet to see the stellar team many of us grew to cheer for back in season one, the duo of Carlos “Cratos” Ayala and Jesse “bubu dubu” Moeller still remains, and the addition of Ayden “Suspector” Hill and the flourishing talent that is Ryan “Shooter” Sondhi makes it hard for me to believe that this team will give up their Pro League spot.

From a statistical standpoint, this team has a K/D of 1.02 and a KA/D of 1.72, which matches up relatively well with the statistics of the rest of the competition, with a league average K/D of 1.005 and KA/D of 1.67. In fact, when looking at the stats alone, one may wonder why this team is doing so poorly with their stats matching up so well compared to everyone else. This leads me to believe that E6’s performance problems are caused not from the roster itself, but from the culmination of the multitude of negative scenarios E6 has found themselves in.

Stress is an everyday feeling pro players are accustomed to. The uncertainty of their future as pros, as well as the added concern of their financial stability doing what they love, makes this a very stressful job. In my opinion, I feel that the players on Enigma6 may have felt an even higher level of stress than the average pro, due to the circumstances they were in this season, which could possibly tarnish their reputations if they don’t survive relegation.

Players, such as Cratos, for example, are already receiving negative feedback prior to relegation. This makes me concerned for his future as a pro next season if his team fails to survive. Of course, this is all a matter of opinion and it would be wrong for me to dictate how these players are feeling. To me, it just seems like the most logical explanation for Enigma6’s performance this season.

In my opinion, Enigma6’s ability to survive relegation will be heavily based on their mental game within the tournament itself. I am sure most of us could agree that this team most certainly has the talent to take on the high caliber amateur teams they will face, but their mental state, in my eyes, has proven to be their most sensitive weakness. If they can somehow ignore the problems surrounding them and keep their focus solely on the game itself, I am very confident that Enigma6 can survive and I would even go as far as to say that this team could make a complete 180 comeback next season, just like Liquid has done, if they maintain a healthy mindset.

What do you think about Enigma6 surviving relegation? Let me know in the comments section below or tweet us @GAMURScom.